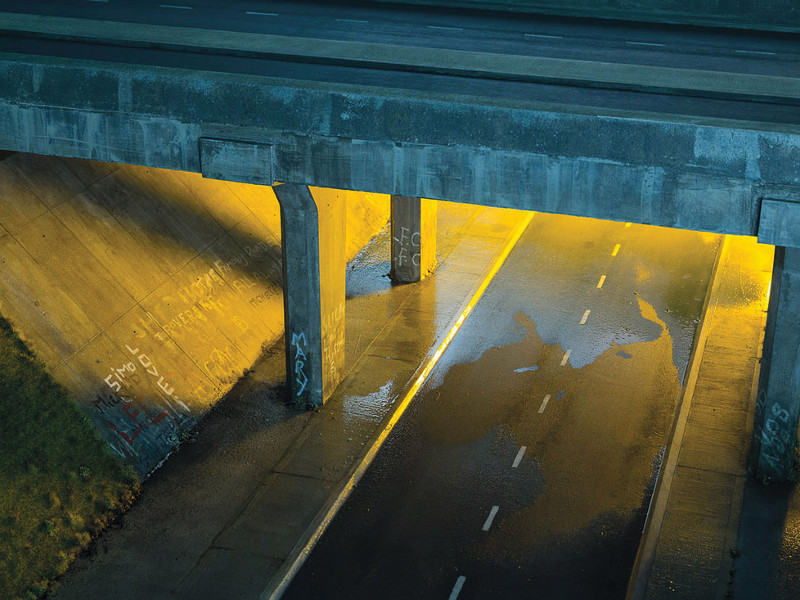 Mark Leckey’s latest exhibition, O’ Magic Power of Bleakness, at Tate Britain takes the visitor under a concrete flyover and into the North-east England of Leckey's past

Mark Leckey’s latest exhibition, O’ Magic Power of Bleakness, takes you through the doors of Tate Britain’s galleries into the underside of a motorway flyover – more specifically, the M53 Eastham Rake Bridge near the artist’s childhood home. Leckey brings the audience into a replica of the concrete space frequented by children and teenagers with nowhere to go, including the young Leckey himself. Here we meet some of its inhabitants, the subject of Leckey’s latest film, Under Under In (2019). Solvent-sniffing, smartphone-clutching kids – just messing around – until in an eerie turn inspired by one of Leckey’s childhood experiences, one of their number becomes a changeling. A video across five screens that seem scaled-up versions of the five boys’ phones shows mobile-shot footage, interrupted by cryptic text messages and more supernatural images. On the other side of the gallery, between a concrete slope and the flyover above, a ghostly projection brings the boys’ figures into the space.

Two previous video works, Fiorucci Made me Hardcore (1999) and Dream English Kid 1964-1999 AD (2015), carry you further into the north-west England of Leckey’s past. The former surveys 20 years of Britain’s underground clubs, with footage of the variously funny and hard-to-watch frenetic dancing of those under the influence, and the latter shows clips of a child playing and a woman brushing her hair, cut with events such as the launch of a 1964 satellite balloon into space.

As the name of the exhibition suggests, Leckey finds a certain magic in the bleak and everyday spaces of personal and collective memory. Here, he recreates the architecture for it: a concrete flyover, with a son et lumière show under flickering municipal-style lights.