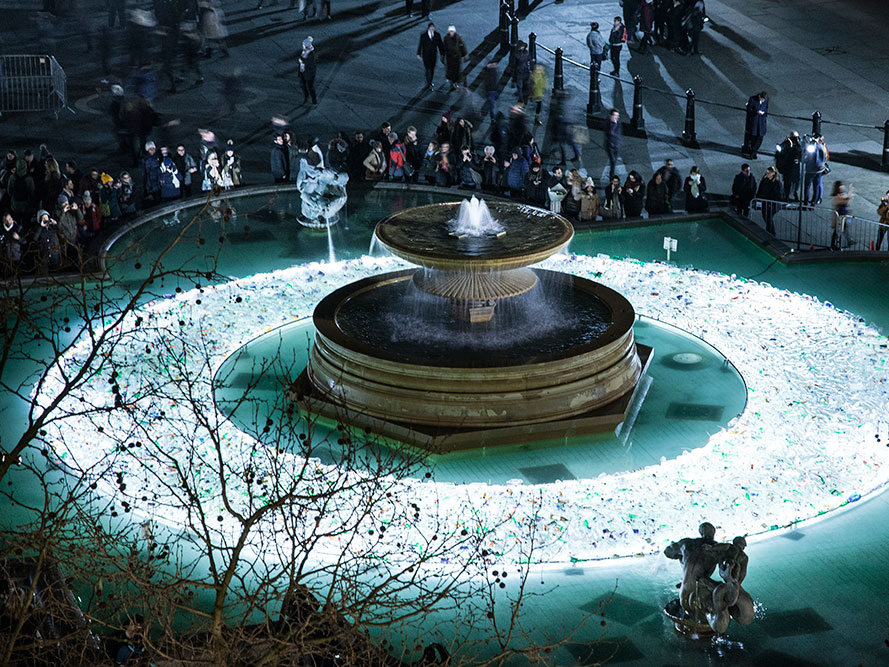 Lumiere London hosted some amazing light displays over the four-day festival; however one which caught our eye is the thought-provoking installation from Luzinterruptus.

The anonymous art collective were asked to create another version of its previous 'Plastic Island' project, this time at Trafalgar Square. A huge 13,000 (thoroughly cleaned) recycled plastic bottles from trash containers were used in one of the fountains and illuminated with light. The group created a doughnut-shaped self-illuminated tube that held the plastic bottles within. This way, the public could not access or interrupt the display.

The original plan was to fill the second fountain in the square with plastic bottles brought by the visitors; however did not have enough and it was left empty. Commenting on the change of plans, Luzinterruptus said, 'The structure was illuminated but empty. We didn't mind this too much and even found this emptiness appropriate.' The goal of the installation was to shed light on the suspected 'eighth continent', the group said: 'To replicate, at a smaller scale, the so-called "eighth continent" made of plastic and garbage which is alarmingly taking over great areas of the Pacific.' The light festival ran from 14-17 January alongside other remarkable displays including Hans Haacke's sculpture Gift Horse.

Church-gone-skate park gets a vibrant facelift