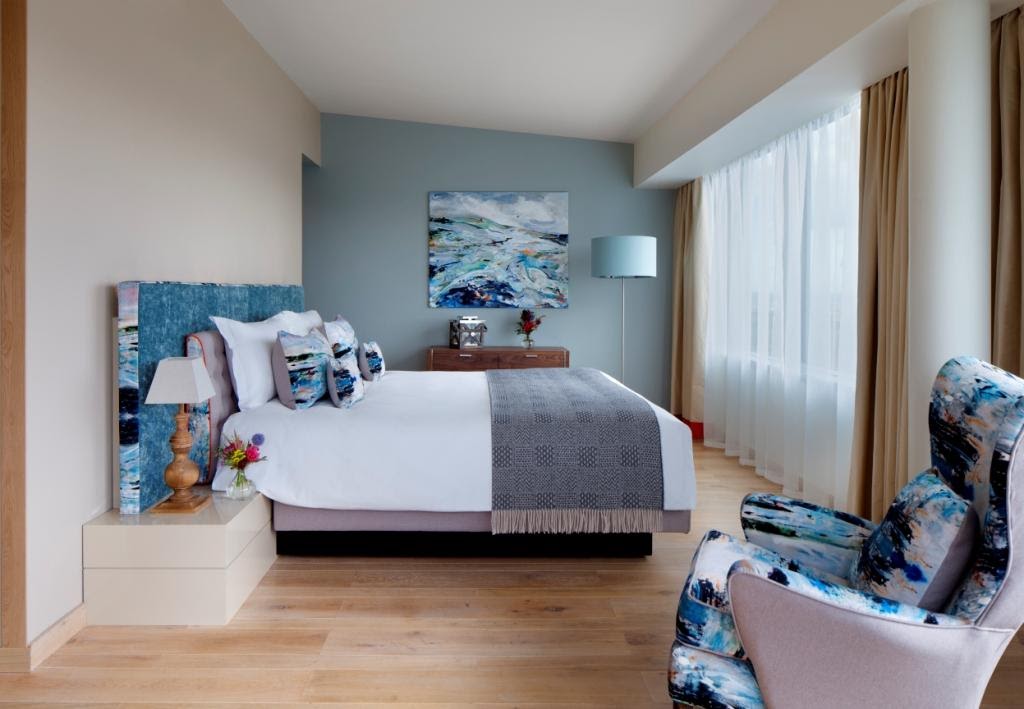 The Radisson Collection, Royal Mile Edinburgh is situated in the heart of Edinburgh’s Old Town, just steps away from the Royal Mile, the Museum of Scotland and the Scottish National Gallery. Previously the hotel existed as a Hotel Missoni, but has since joined Radisson as one of the hotel group’s new Radisson Collection hotels – a “new generation of iconic properties” where “individuality is [the] strongest common thread”.

For the Radisson Collection, Royal Mile Edinburgh, individuality certainly is key; the hotel has launched Doga classes (Yoga with dogs) and a Vegan Afternoon Tea. Most recently, it has unveiled a new Living Art concept that allows guests to  purchase the art, antiques and furniture within the suite that they are staying in. However, there is more to this Living Art concept than simply being able to buy furnishings.

A Scottish artist has curated each of the suites that are part of the concept, with each artist – or, in one case, a fashion designer – choosing a room and designing the space’s interiors. To find out more about each of the Radisson Collection Edinburgh’s Living Art suites, we spoke to the artists behind each room and discovered their thoughts on designing interiors.

Scottish painter and textile designer, Hatti Pattinson, designed two of the Radisson Collection Edinburgh’s suites – the Garden Paradise Suite and the Castle Suite. Primarily a painter, Pattinson started printing a few years ago, but says her textile designs “are always inspired from [her] original paintings.” When creating her art, Pattinson works mainly with abstracts and natural colour palettes; she explains that this also influenced her process of creating the interiors for the Garden Paradise suite. “It started from a painting I’d already done,” Pattinson begins. “The sitting room started from [my painting] In Bloom, and from that I painted a picture of a garden bed, and two other pieces. From those we designed a mural and I hand-painted a column that’s in the suite with drips of gold. It was quite an organic process.” The Garden Paradise suite is a “penthouse suite looking over the city, and I think that was why I wanted to make the first room a real party room,” she continues.

Within the sitting room of the Garden Paradise suite, Pattinson has recovered furniture that was in the space before the renovation of its interiors took place. “There were some beautiful, really high quality pieces already in there [which we] upholstered in my fabric,” she says. “For example, there were quite laid back arm-chairs that spin, and… I thought, ‘I’ve got to use these!’”

“You can print on all sorts of surfaces, [so] we could print onto pre-existing [pieces of furniture] and make statement pieces that are quite impactful. You might not do them in a home but in a hotel, it works because it’s a temporary, fleeting, fun space,” Pattinson continues. She mentions that the Garden Paradise’s bedroom, however, has a very different feel. “You can see the sea from there so it has been inspired much more by the sea – it’s a much calmer room, with soft blues and greys. It really reflects the colours from the window, [and] is more tranquil.”

Though Pattinson has previously worked with interior designers, she says she had “never had the scope to do a whole [room] [her]self”, which resulted in a few new challenges. “I had to consider the durability of it; [I thought] ‘people are going to come with their bags, knock them against walls, so it’s really got to be hard wearing’. It’s something that you’ve got to think about when designing anything – what that end product will be.”

Pattinson says that, despite the challenges, “I felt very lucky to have a job like that. I wanted to transport people somewhere else, where they can get lost in the details and colour of the room. It’s lucky that it has the most breath-taking views, it’s a wonderful space to be in, but I hope that they feel that they’re walking into a painting. In the room where they sleep, they are surrounded by waves and the sea; I want people to embrace it.”

Scottish fashion designer Judy R Clark was another artist that took part in creating a suite’s interiors. Interestingly, she had first worked with the hotel when she designed uniforms for it, while it was under a different hotel group. This meant that when the hotel was renovating its interiors, Clark was front and centre for the concept. “I suggested myself, my sister and Hatti, as good people to take forward down that route,” she explains.

“The three of us pitched our ideas to the hotel and they seemed to like them all – and it just went from there," Clark continues. "We had studios in the same building so the three of us were working quite closely together all the time… Everyone’s [room] is so separate and unique, but it was good to have that friendship and work balance where [we could] advise each other on what [was] best to go into the room. You can be a bit more truthful and honest.”

Having launched her own fashion label in 2009, Clark has built a reputation for herself with brands including Ford asking her to do conceptual work for them; but working with the Radisson Collection Edinburgh was her first experience designing interiors – so how far away was this from fashion design? “I think when you’re looking at textiles, you’re looking at colour weaves and patterns, and I suppose those are things that go hand in hand – fashion and interiors,” Clark muses. “I didn’t find it too difficult a jump, to be honest. I actually found it really good fun.”

“I took a lot of inspiration from my own fashion collections,” Clark says, discussing the inspiration for her suite. “A lot of the fabrics that were used in the hotel are things that I’ve used in my fashion collections. I was over in Morocco and the colour weaves they have there inspired me, so the room has a couple of Moroccan lamps, which contrast with the rich fabrics and the velvets. It was about finding things I would use in the studio and transforming that into an interior that would be relaxing, but also be a little bit different.”

As well as the aptly named Judy R Clark suite, Clark has designed interiors for two of the Radisson Collection Edinburgh’s premium rooms, which feature antiques and bespoke furnishings. “There are a lot of period features, like the hand-painted ceiling,” she says. “There was a lot going on in those rooms – that’s why I picked them though, because of the hand-painted ceiling and because they weren’t too big. They had enough space but gave that nice, cosy feeling of being in Edinburgh and looking out over the Royal Mile. There was something quite unusual about it.”

Clark mentions that the hotel gave each of the artists “complete design freedom to do what we wanted.” She used this to bring in suppliers that she had worked with previously; “I try and work with most suppliers that I’ve met,” Clark says, giving the example of “a Scottish lace company that produce stunning laces. They’re all luxury fabrics too so it’s good to have them close to home. I thought it was really important to use Scottish resources.” For Clark, when it comes to making project unique, whether it be a jacket or a suite's interiors, “it’s the details that count”.

While Timorous Beasties also designed a room and have prints in the Radisson Collection Edinburgh’s restaurant, Cucina, the final artist that DesignCurial spoke to about their interiors was Christine Clark. A painter who depicts imagined landscapes and narratives, Clark is also Judy R Clark’s twin sister; she was instantly drawn to the suite at the top of the Radisson Collection Edinburgh’s sixteenth century garret, and has designed her suite with vivid colours and bespoke furnishings.

“I was drawn to the rooftop suite because it had a spiral staircase leading up to it – it felt very romantic, tucked away from the rest of the hotel,” Clark begins. “I thought that would suit my work; I felt it could almost tell a story in itself because of the journey to get there… Most of my works have quite a strong narrative behind them and tell a story, and they are quite dreamscape and full of colour,” she continues, mentioning that that the interiors she has created are similar to this dream-like intensity.

The room, Clark says, is “named after one of my paintings called Rooftop Rest. I think it suited the space because it’s up in the attic. It’s the main painting above the bed, [and depicts] a couple embracing on the rooftops of Edinburgh. I had the painting before getting the room; it’s a sleepy, dreamy piece that’s about Edinburgh, and you can lose yourself in the work, so I thought it would be suitable for the room.”

Clark explains that, in contrast to Hatti’s idea of recovering furniture, she “changed all the furnishings in the room”. Instead, she sourced her pieces from “different vintage shops and old furniture shops in Edinburgh. I wanted a contemporary feel as well, a fusion of old and new.” Clark then reupholstered the pieces she found, which was made easier given the fact she was working in close proximity with other artists who understood textiles.

“I hadn’t done that before and I wouldn’t know how to go about it on my own, being a painter, [so] it was great to work with Hatti in that respect, because she does textiles,” Clark explains. “It was great to have her advice on how to print, or where to get it done. I think I printed thre paintings onto different pieces of furniture and other locations in the bedroom – it was really fun actually. It was quite exciting to see how they turned out.”

Clark has maintained a narrative throughout the Rooftop Rest suite, and guests that stay there will certainly find a few surprises. “There are little illustrations on the walls and behind the shutters,” Clark reveals. “It’s about finding little hidden secrets in the room as well… In the wardrobe door at the back, I’ve painted two little sausage dogs just for fun! I like the idea of weaving a narrative or story through the room that’s not visually right in front of you, you have to find it as you put your luggage away or explore the room.”

From bright, sea-inspired rooms to colourful dreamscapes and cosy hideaways, each of the artists involved in the hotel’s renovations have created beautiful, unique interiors for guests to enjoy and explore. Even more than this, if guests want to take a piece of their stay home with them, with the Radisson Collection, Royal Mile, Edinburgh’s Living Art concept, now they can.