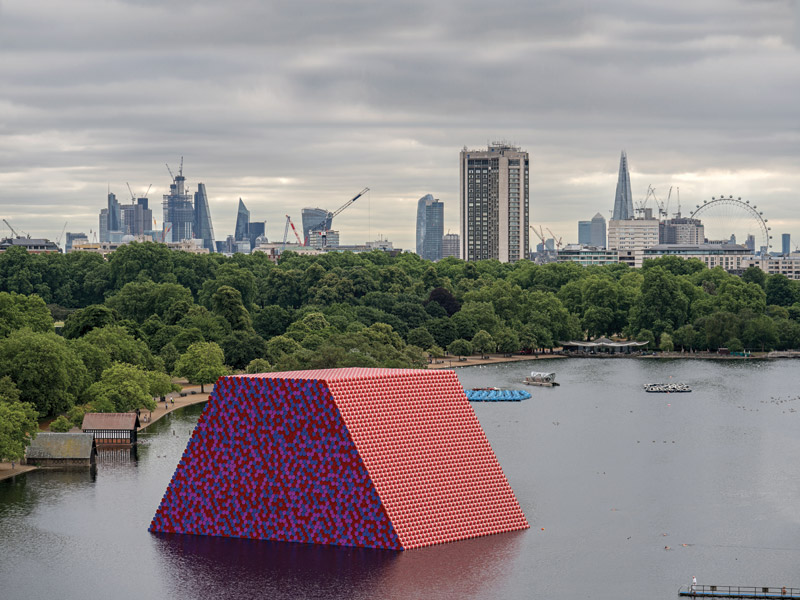 I left school at 16 with no qualifications but with a passion for technical drawing and art. I started working in an architect’s office with no experience but quickly developed a skill for architectural detailing. It was the architects in the office who encouraged me to go to night school to gain the qualifications needed to enrol at the Polytechnic of Central London’s architecture degree course.

It’s pretty difficult not to say that architecture right now is at a radical interchange. We have entered a period where almost anything is possible in the built environment. Look at what’s happening in Doha and the new slender high-rises in Manhattan. However I also think the industrial aviation processes adopted by Jean Prouvé in the Thirties were a pivotal moment – the start of highly stylised factory-built construction. I would have to say Malcolm McClaren and the punk movement have inspired me most.

The work in the Bill Viola exhibition at the Royal Academy was incredibly thought provoking and some of his writing is enlightening. I was in Berlin again in January and I am always blown away by the city’s response to the war and the Wall coming down in 1989. It is particularly affecting considering Brexit and the new divisions in Europe.

Our children are almost always more sophisticated than we care to acknowledge and Gen Z is the first cohort to have entirely adopted technology. This development has given mobility and immediacy to their consumption habits. Their living spaces will be intuitive and designed to redefine how they live, work and play. The emerging subscription economies will influence our environments to a greater extent than any other economic evolution.

Nanotechnology is one of the cornerstones of ‘wellness’ architecture and will provide more sustainable, living and responsive buildings with pristine air quality, a focus on acoustics, light, temperature and scent. Nanotechnologies will make buildings more cost effective, more energy efficient and in tune with the environment. Coatings that can remove and neutralise pollutants from the surrounding atmosphere, conduct power, heating and cooling and will also self-clean, and that will dramatically change the architectural envelope.

Tanizaki’s book In Praise of Shadows is something I go back to over and over.

I am still impressed by Foster’s Reichstag in Berlin, even after nearly 30 years, and I remember with great admiration Christo’s wrapping of the building in 1995. His Mastaba piece in London last year has a nice resonance, given the world we are now living in.

I think best with...

Pen and paper, an A5 notebook for notes, sketches doodles and even poems.

First thing in the morning when I am out running; it’s the closest I get to meditation. I think best when... I have a clear desk.

The thought that keeps me up at night is...

I always go over ideas for my own house or my dream house in my mind when I want to go to sleep. I find the ordering of ideal spaces calming and I rarely have trouble sleeping.

I am a naturally early riser and get excited by the start of the day: 86,400 seconds of possibility.

As I have got older, I find thinking with achieves better results; bringing compassion into a dispute or difference of opinion can be helpful.

I believe my way of thinking would have led me to get involved in building something somewhere. This may have been a bar on the beach near a good surf spot if I had not studied architecture, but my father was a part-time developer so it’s always been a part of my life.

No, but I can in five: Radical thinking stimulates beautiful communication.

WHAT IS RADICAL THINKING?
Harry Harris

To deal with ideas problems and solutions we need to think radically, writes Harry Harris. We need to understand how things are connected. How one thing affects another, how language is used. How we analyse what is being said, offered and executed on behalf of ourselves.

One of the first things you learn in dealing in radical ideas is people are very wary of the title radical. It conjures up for some the pejorative ‘trouble-making disgruntled lefties’, a form of vilification used in right-wing quarters for anyone who speaks against their policies or ideology. So really we are just meaning thinking using the facts available to us rather than what others would like us to think.

Business uses radical thinking, radical planning, radical changes constantly, mostly in order to cut costs and staff and increase profits. Only when ‘radical thinking’ is applied by the person in the street does the term become pejorative, trouble making and dangerous.

My idea of radical thinking is the same as the businessman’s. That is getting down to the root of the situation or problem. It is not useful to concentrate on the beauty of the blooming flower if its roots are infected by disease. You might appreciate the flower’s beauty in the short term. But if you wish to enjoy the flower next year, radical action needs to be taken to save the roots. The question to ask is how much do you see happening around you in society that relies on surface gloss but has no basis for sustainability?

The plant and root analogy can be applied to a great many things in our personal and community life. If industry feels the need for radical inspiration in order to exploit the goods and jobs market it would stand to reason that radical thinking would be needed to protect the individual from the same type of forces.

So you can find that terms such as ‘radical’ when applied to business are seen as progressive, but used in social inclusion, poverty, unions, or workers’ rights, the words are derogatory. So. What are the benefits of radical thinking and why should we use it when trying to affect change or improve our situation? We need to think radically because we want a lasting effect. We need good foundations to build on. We need to be sure of the premise (reason) for the arguments put forward as progressive change. Discussing the ideas, how they came about, who will benefit by them and if they are of any real use to ordinary people.

Think of words by what they mean, not by what they are used to represent. The term radical from the Latin ‘radicalis’ means ‘root’… It means getting to the root of the issue or problem. So if we want to understand more about what is going on around us sometimes we need to apply some radical thinking. If you want, think of it as common sense.

Peter ‘Harry’ Harris is the founder of SUSD and a champion of convergence in how we work, play and live our lives today. His projects include The Curtain – hotel, members club and co-working space – and the Devonshire Club in the City of London. He has also recently provided development management services to The Collective.