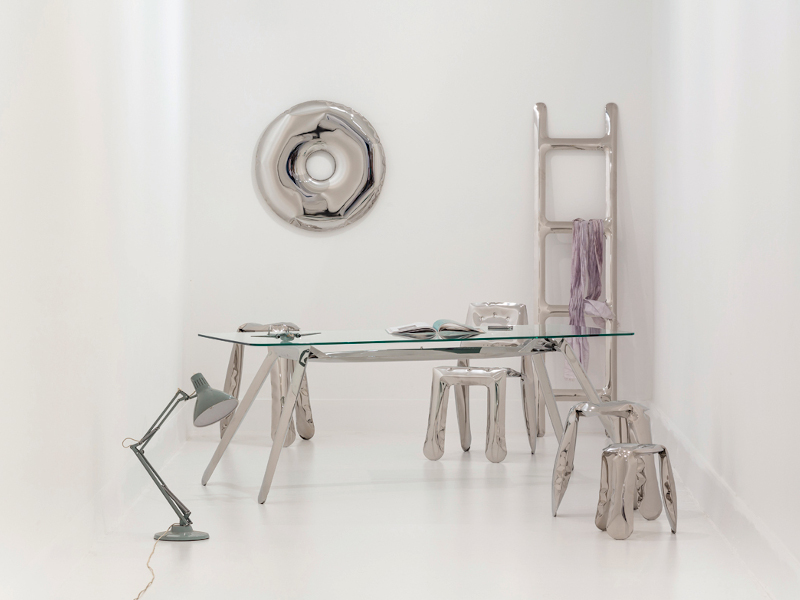 For me, it was ‘love at first sight’. As an engineering student, I discovered an ‘industrial design’ programme at an educational fair – from that moment it became my passion and obsession. I’m really confident about what design can do and how it can improve people’s lives.

Regarding the radical design of modern domestic landscapes, I would have to say the 1950s. A post-war decade, this era was very creatively fruitful. The three key furniture styles that were popular then – machine-look, handcrafted and bio-morphism – are still all influential today. I also think about the 1980s, when Memphis was born, which is one of the most experimental design movements. The first ones that spring to mind are Roland Barthes, Walter Benjamin, Kenya Hara, Ettore Sottsass. Barthes repositioned the reader at the centre, rather than the author, which created a different meaning; Walter Benjamin introduced his ‘aura’ concept within art; Kenya Hara’s clear analysis on aesthetics were very inspirational; and Ettore Sottsass’s forms and colours were bold yet playful.

Currently, Muhammad and Buddha – I guess I am becoming more spiritual!

Chefs – I have always thought that there is an amazing talent in bringing thoughts and ideas together and making them a reality. The S-shaped one-piece chair by Panton

We must learn to value true local cultures – this will only come with curiosity and a desire to investigate our roots.

Reading is more educational, instructional. I find it more inspirational to talk to people, so I would recommend speaking with others – it will enrich your knowledge and expand your vision.

The S-shaped one-piece chair by Panton was radical because it redefined the leg-to-seat relationship. In addition, the Zieta Chippensteel Chair has an aesthetic that was created by a completely radical process, rather than a fully controlled drawn method. For me, both designs questioned current typologies by choosing new materials and processes. Akan names Ettore Sottsass as one of his radical thinkers. Pictured here is the designer’s Carlton bookcase. Image credit: Sailko.

I think best with…

A pencil and A4 paper.

In the late afternoon.

How can I change myself, my career, my environment around me…

Having the chance to do so!

Unfortunately, nothing was radical.

Alongside his Design Director role at VitrA, Erdem Akan is an award-winning designer and founding partner of BOxER a leading strategic design consultancy. He has a vast academic background including a degree in mechanical engineering, industrial design and design management- yet he is a firm believer of the self-trained design spirit, describing himself as a visionary who blends diverse cultures and disciplines. Merging the modern and the traditional, his style also reflects the fusion of cultures in his hometown of Istanbul. Erdem’s designs have been featured in publications including Wallpaper*, New York Times Style Magazine, Interni, Elle Décor and I.D and in 2012 he was awarded Elle Décor Designer of the year Turkey.
vitra.co.uk

FX TALKS: Videos of the speakers from the 2019 event can be viewed now at fxtalks.co.uk