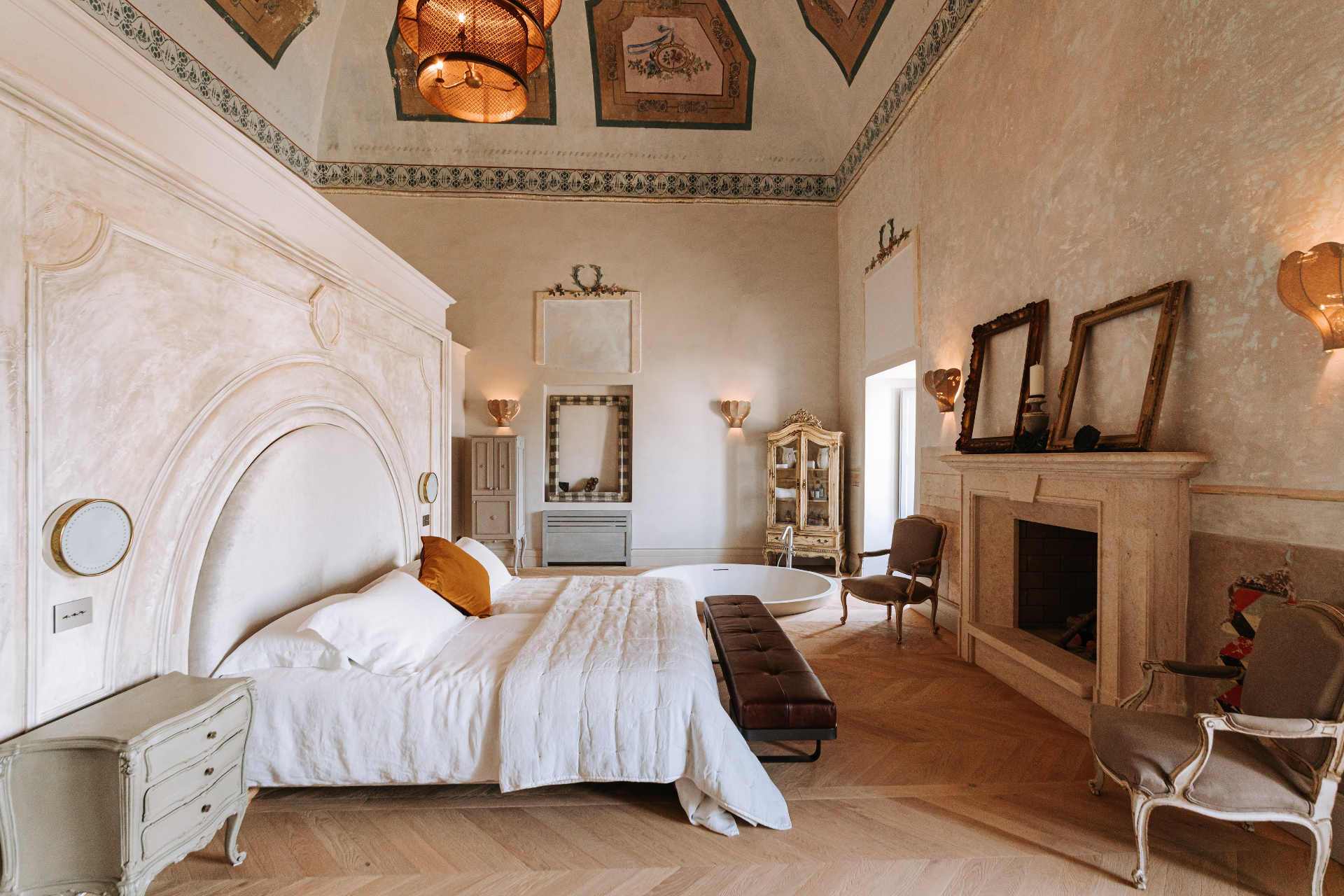 We share quirky design facts from a range of hotels, both big and small, that will delight and surprise everyone from frequent travellers to the simply curious.

Hotels across the world come in all sorts of shapes and sizes; some have been standing tall for decades, while others are up-and-coming, newly launched or still in development. Experiences in hotels will also differ, depending on guests needs; some become retreats for respite or relaxation, others act as homes-away-from-home, or a base for exploring a city or town’s culture and history.

But what many don’t know is that hotels often carry their own secrets and interesting facts – including accidental asymmetric designs, custom-made mini bars, histories that date back as far as 1000 A.D., clock towers that are purposefully fast, and locations that are full of culture and intrigue. With this in mind, we’ve chosen to look at a range of hotels – some grand, some boutique and some in between – to share the quirky design facts that make these hotels the unique, remarkable places they are today.

Founded by the altruistic Lady Glenorchy, The Glasshouse was originally a free church built for the less-wealthy people of Edinburgh, either to come to for worship, or to act as a shelter for those affected by homelessness. Constructed in 1846, over the years as the congregation that used The Glasshouse merged with the surrounding branches of the church – eventually settling at the much larger Greenside Church – and the chapel stopped being used for worship. Left in disuse, The Glasshouse underwent a variety of guises over the years; at one stage, it was even a carpet warehouse. In 1986, permission was granted to develop the site on the condition that The Glasshouse’s original façade was retained and protected. Building work finally started in 2000, with the luxurious, five-star Glasshouse Hotel opening its doors three years later. To this day, the striking gothic façade that guests step through upon entering the hotel serve as a reminder of the buildings’ rich history, and the chapel Lady Glenorchy gifted to Edinburgh’s community.

In Moscow’s historic heart, moments away from the Kremlin and the Red Square, the Four Seasons Moscow stands as a modern replica of the legendary 1930s-era Hotel Moskva. Taking inspiration from the famous asymmetric hotel, the Four Seasons Moscow stunning reimagines the Hotel Moskva to allow guests to experience the grandeur and architecture of the original hotel, with a contemporary spin. What many don’t know about the Hotel Moskva’s distinctive design is that it almost never happened. The architect behind the design, Alexei Shchusev, submitted two plans to Soviet leader, Joseph Stalin, for the 15-storey building, putting them both on the same sheet of paper. Stalin, however, put his signature in the middle of the document – making it unclear which design he preferred. Instead of questioning Stalin’s choice, Shchusev moved ahead with both designs, and the Moskva’s unique design of classical columns on a central portico, flanked by two asymmetrical wings, was born.

Celebrating its surroundings’ heritage, political, and art scene, the sophisticated Conrad London St James boasts a range of landmarks on its doorstep, including Buckingham Palace, the Houses of Parliament, Big Ben, and Westminster Abby. Designed with contemporary features, guests are sure to enjoy exploring Conrad London St James, and might realise that there’s something extra special about the hotel: it doubles as an art gallery, showcasing specially commissioned artworks that have been influenced by nearby Westminster and St James. Every wall within Conrad London St Hames tells a story; standout artworks include caricature sculptures of Britain’s most recognisable politicians, and the most modern interpretation (to date) of Her Majesty, the Queen. Conrad London St James has also paid homage to the 19th century suffragette and political activist Emmeline Pankhurst with its lounge, Emmeline’s Lounge, where afternoon tea is served. Guests looking for something stronger can enjoy a drink in the Blue Boar Bar’s refined interiors – a take on the traditional British pub – and listen out for the sound of the House of Commons Division Bell, which is rung eight minutes before every parliamentary vote.

Spanning a 170-year history and nestled in the middle of a five-hectare park in Sabran, the Château de Montcaud first opened as a hotel in 1992 – and more recently underwent an extensive renovation, reopening in July 2018. Throughout the years, the estate has frequently changed hands; it was first build in 1848 by prominent silk trader, Alexandre Eugène Collain, but became a cultural icon for the area thanks to his son, philanthropist Florentin Collain. Château De Montcaud's transformation into a hotel allowed guests and local residents of the area to fully appreciate this grand estate, with Collain’s love for culture and nature leaving lasting traces within the authentic French château. After the 2018 rejuvenation, which aimed to breathe new life into the property and “redefine” hospitality in the Sabran area, Château De Montcaud has become a relaxing retreat with the “luxury of simplicity” at its heart. Guests can explore the estate’s expansive park, discover Cèze Valley’s untrodden paths, enjoy swimming in the pool or games of tennis, and dine in the Château’s two restaurants.

Set in the historic village of Bray-on-Thames in Berkshire, Monkey Island Estate has a captivating history that dates back over 800 years. Even the island’s exotic name is shrouded in mystery, with some historians linking it to the Church’s early ownership – around 1197, it was christened ‘Monks Eyot’ – while others suggest it pays homage to the 17th-century Pavilion building’s Monkey Room, which features extensive frescos of monkeys punting, fishing and hunting, created by French specialist, Andie de Clermont. Across the centuries, the island and its Grade-I listed buildings have been the haunt of monarchs, artists, writers and aristocrats, including Edward VII, H.G Wells and Clara Butt, with Monkey Island even playing host to the 1965 Oxfam Ball. In the 1980s, however, the island fell into decline… until it came into the expert hands of YTL Hotels; after a huge investment and an extensive renovation, Monkey Island Estate has returned to its former glory, welcoming guests to experience the serene Thames setting and centuries-old architecture.

Set to open in the summer, Paragon 700 Boutique Hotel & Spa is an elegantly restored red palace in the heart of Ostuni, Puglia’s ‘White City’. Only a five-minute walk from Ostuni’s main square, the hotel’s red brick façade stands in stark contrast to the whitewashed buildings of the city, while its lush garden and swimming pool marks it out as an exclusive oasis. With only 11 rooms and suites, Paragon 700 is a boutique hotel offering guests the chance to explore Ostuni and everything Puglia has to offer. The Palazzo Rosso – the Red Palace – that now houses Paragon 700 has a fascinating history, and has always been at the centre of Ostuni’s social and cultural life. Once the home of the city’s first mayor, the building has also housed the Biennial exhibition of the Industrial Technical Institute; held four classes for the city’s Scientific High School in 1971; and acted as the barracks for the Italian Customs and Financial Police. To this day, the magnificent vaults, centuries-old stones and historical frescos have remained intact, and with the opening of Paragon 700, guests and locals alike will be able to enjoy this unique piece of the city’s history.