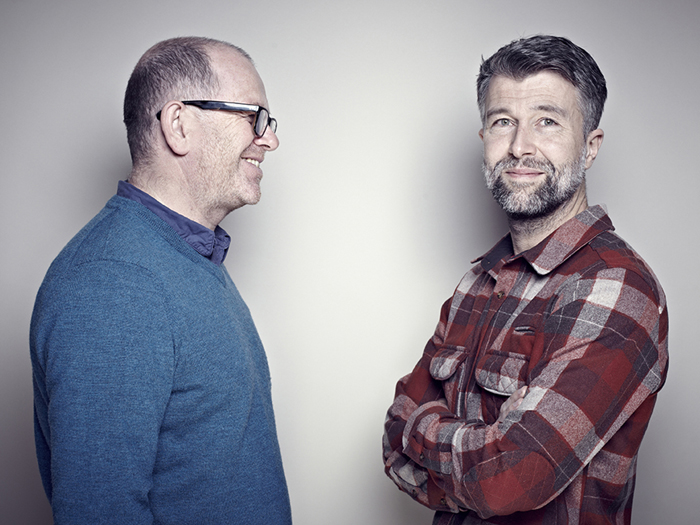 Ahead of an exhibition of their work at Great Western Studios in west London next month Luke Pearson and Tom Lloyd, founders of the product, design studio PearsonLloyd, talk us through the highlights, including a chair that took three years to design and a portable toilet that helps limit the spread of MRSA in hospitals. Photo: Mark Cocksedge

What do you think you'd have done if you hadn't become a designer?

LP: I'd probably have been a physicist. I've always wanted to know how things work and find the world of science and nature full of stunning imagery and complex scenarios.

TL: Possibly something creative to do with business, economics or politics, which has always fascinated me.

How has the design world changed since you founded PearsonLloyd 15 years ago?

LP: The tools we use have changed and so has the speed of developing designs. There are so many more designers now chasing work, and this changes how designers are attempting to make things. There is a great move towards setting up small-scale production and networking which is very useful as designers lose faith in working for established manufacturers. This has also been promoted by the wealth of new production methods which are literally at our fingertips. By this I mean we can zip a file to china via email and get sent back a prototype a few days later. At the same time high tech machinery can be found in small-scale workshops locally. Things are very different.

What advice would you give young designers starting out now?

TL: Be versatile and be prepared to work harder than you can imagine. But also enjoy yourself and take risks.

What advice would you give to your younger selves?

TL: Hindsight is rarely positive and I think we would do everything different a second time round.

Of all the work in the exhibition, what makes you most proud?

LP: The breadth. It's really hard to work in diverse fields and be a small studio. When we see the work together we can recognise that our earliest ambitions to a large degree have been realised, and that the pluralist route we have taken has kept our interests. Being proud is an odd emotion as with design you always see ways to improve something once it's complete. I think you have to accept compromise and the pleasure is in knowing what obstacles you overcame to achieve the result.

The Parcs range of office furniture, designed for Bene

What pieces in the show are most memorable and why?

LP: The work for Bene has been very interesting as the original brief was to look at a few pieces of breakout furniture but the result is a very large collection dealing with more strategic issues. Sometimes opportunity is what you make it. We saw a gap and realised there was a massive opportunity and it was one of those rare situations when you can take the client on the same journey. Mostly things drop off the back of the wagon but with Bene we have had incredible success and they have been a great team to work with.

Walter Knoll Lox chair is a product that is memorable in that a single chair with very few pieces took three years to develop. The single plastic shell was very difficult to engineer as Walter Knoll's demands were very exacting in terms of build, cost and assembly. Marrying all this with the very singular form took many hours and weeks of finessing. It's fantastic that over the 15 years we have worked with Walter Knoll, the company' willingness and trust in us has increased to the point where we are really pushing the envelope on production.

Lox is a very high-tech piece of modern industrial production married to very fine upholstery. Being a part of a company's development, working very closely with the owner and his team is both taxing and highly rewarding. Along the way there are however many harsh disappointments, inevitably as the standards are so high.

The commode for Design Bugs Out is one of those projects that everybody is slightly embarrassed to look at or talk about but is very worthwhile as a project. It will save lives ultimately by reducing the spread of MRSA and other super bugs. As you can imagine, factoring the way in which viruses are spread made it quite a tricky project to handle. We were able to bring all our knowledge to this project to produce an industry-changing solution.

What has been the hardest project you've ever worked on?

TL: I think the hardest project physically was the Upper Class Seat for Virgin Atlantic. We were young, relatively inexperienced working with a very young team at Virgin. The programme was dangerously fast and we were flying by the seat of our pants. However, when we achieved such a great result it was a huge confidence boost but also changed the type of work we could undertake thereafter.

What's the most important thing to think about when designing a product?

LP: The brief. If the brief is rubbish then there is no point in starting.

What are your hopes and ambitions for the future?

LP: To find the same interest that we have found over the last 15 years and hopefully take on projects that will make a difference. You need to be passionate to do good design for a long time, as it needs so much more than an eight hour day. Continuing to learn so that each new job represents some fresh challenges would be just fine. And last, but by no means least, having the opportunity to work with great people, clients and staff alike.

1:1 Inside Design with PearsonLloyd is on at Great Western Studios, west London from 13th until 22nd September. Admission is free.