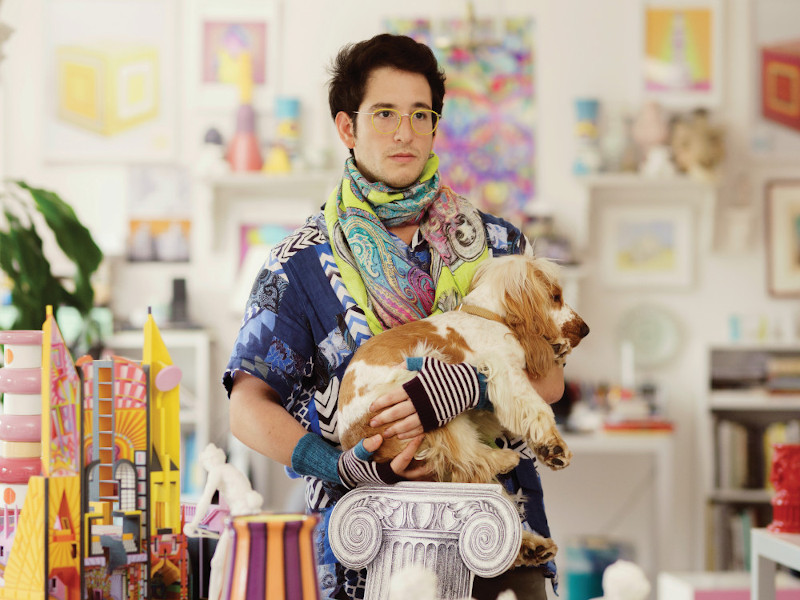 A lot goes into making a person who they are – and when that person is a designer, a lot of that goes into what they create. For Adam Nathaniel Furman, ‘mixiness’ is a key aspect of this artist/designer/architect’s identity and work.

The word Furman uses refers to an Israeli, Japanese and Argentinian heritage, although Furman hints at further diversity: ‘Every time I speak to my mother she still doesn’t manage to give me a clear description of what her fucking background is!’ Furman also identifies as queer, and is most definitely a Londoner. London is, after all, where the designer has spent all their life, and it fits a certain notion of ‘mixiness’ too, or as Furman puts it lovingly: ‘It’s just a mess.’

A recognisable style has been honed over the years – colourful, patterned, ornamental, cheeky, layered with historical and personal references. Furman describes the development of that style as having been ‘an introspective personal journey, rather than a theoretical one’, but notes that it was influenced by a strong interest in transnational aesthetics and ornament, and things that are ambiguous and in-between ‘in a queer way’. There is ‘cheekiness’ and overexuberance, although there are also more specific cultural references. Some of the touchpoints Furman mentions include toilet humour, a Japanese fairytale told by Furman’s grandmother, Bjork’s album covers, and Yo Sushi!’s aesthetics.

Furman describes the Jewish and queer histories – ‘aesthetically, culturally and politically in relation to Britain and the Western world’ – as two things that were grabbed onto and understood, but notes that ‘the other bits of my background don’t fit in … the mixiness is still an issue’. Speaking of the complexity of diasporic identity, Furman says the Argentine, Japanese and Jewish influences added up to ‘a lot of cultural and aesthetic input, different ideas, that were just flooding me’.

But the work these inputs produced stood out and caught press attention early on – even while working at an architectural practice Furman’s side projects appeared in Vogue, confounding their peers at the time. Since, Furman has gone on to receive many awards, including the British Academy’s 2014 Rome Prize in Architecture, and most recently the 2019 FX Award for Product Designer of the Year.

Furman believes it is important to be true to yourself in what you create, for both personal and political reasons, and has often written on the subject. In an essay titled Outrage: The Prejudice Against Queer Aesthetics for the Architectural Review in 2019, Furman writes: ‘Within architectural circles, it is, to a degree, acceptable to be queer in your life but it is not, and has never been, acceptable to express this through the architecture you produce. You will be tolerated, not accepted. The Royal Family is a collection of three furniture pieces made in collaboration with Abet Laminati. Image credit: Federico Floriani.

‘Our cities should be parliaments of social signification in which the depth and variety of our history is celebrated, and the plenitude and complexity of our present is represented. Where queerness can thrive, there is space for everyone.’

Furman is also a vocal participant in architectural discussion on social media, but here both the designer’s own work and the ideas that they have advocated – such as postmodernism, a subject on which Furman co-authored the book Revisiting Postmodernism with Terry Farrell – have invited some unfriendly and unexpectedly vicious comment.

Yet while an advocate for plurality of aesthetic expression in architectural work, Furman can be self-deprecating about their own style and abilities at times, self-describing as being ‘no good’ at certain ways of drawing and working and ‘very slow to absorb new knowledge’. It’s a negative spin: Furman is hardly lacking in talents, and is an eloquent, engaging, sensitive and receptive individual in conversation, with extensive knowledge of architectural history and an earnest interest in and relationship with their influences. That can only be a positive contrast to designers who may too easily sift through and skim from cultures without considering the meanings and complexities.

Unfortunately, the recent experiences on social media are not the first time that Furman has faced hostility from peers: although their family unit was strong, Furman attended the elite Highgate School in north London, which proved to be a culture of privilege but very little tolerance, was lacking in understanding or support for those with behavioural difficulties or different ways of learning, and was rife with closed-mindedness, homophobia, and anti-Semitism.

The designer was drawn to art from early on, and through that ‘made their own world’, one that they would like to live in. Art has long been considered a safe haven for creative misfits, yet Furman speaks plainly about the prejudice and elitism – often expressed via an attitude of ‘cool’ but harmful ironic distancing – that were and still are present in art schools, those supposed bastions of progressive thought. Similarly, on the matter of anti-Semitism, Furman has been shocked recently to witness things they ‘never want to see again’ from those that are admired in the industry today.

Fortunately, Furman found the architecture students and tutors, both while studying and later teaching, to be far more engaged and honest – qualities that are deeply important to Furman. It was the impassioned but supportive tutelage of Saskia Lewis, a lecturer in spatial design on Central Saint Martins foundation course, that enabled Furman to apply and attain a place at the Architectural Association, the place of choice for the ‘misfits’ and all Furman’s ‘heroes’, thanks to a then open admissions policy based entirely on the portfolio and interview rather than the formal qualifications of education. Furman is now well-known, with their latest projects receiving media and critical attention. Furman is keen, however, to also get a positive response from the wider public. Furman wants to channel the energy, position and experience they have into desirable and commercially viable products.

Some new projects are helping Furman along. At January’s Maison&Objet in Paris they presented a collaboration with Botteganove for the handmade ceramic tile range New Town, featuring pastel colours with circular elements and curves, that was ‘inspired by British town planning’ and Italian architect Carlo Scarpa’s paving. A door handles project for Swarf is on the way, as is a coffee table for De Rosso planned for the next Salone del Mobile. Before that, however, Furman had taken the plunge with speculative projects, working with emerging companies with whom a mutual appreciation was shared; Furman describes an Instagram dialogue of ‘You’re so amazing’/‘You’re so amazing’ as an unfiltered, unfussy and instant manner of communication that was shortly followed by collaboration. It has been less easy for Furman to connect with the more established companies; Furman describes ‘shamelessly’ approaching them, but conceding that, ‘a little bit like a lover, if you’re too easy to get they don’t want you’. The speculative projects include the Hitotsume-kozo furniture collection with Glasgow-based surfaces company Mirrl, while another is Furman’s own PHaB chairs. Having been recently shared by the media, Furman is hoping that these projects might lead to more collaborations and commissions.

Furman recently completed Radiance, an architectural artwork of waterjet-cut ceramic tiles for the maternity ward of Chelsea & Westminster Hospital, and is also working on the Fair Field Masterplan Croydon project, as part of a ‘really fun team [with] really wildly different people’ – from MICA, Charles Holland and Ooze – that managed to beat some ‘superstar’ teams to win the competition. This civic regeneration project in south London has at its heart the recently renovated Fairfield Halls – a relative of the better-known Royal Festival Hall – that is in a style Furman describes as ‘utterly, utterly gorgeous British cosy modernism’, that makes ‘you feel good’ when you walk past, unlike brutalism, which Furman suggests you have to be trained to like.

Furman’s contribution to Fair Field’s ambitious landscape – which has natural non-chlorinated water features and underground carparks playfully revealed by cut-out circles – is a series of giant monuments, with simple shapes in a ‘heroic modernist’ style, but done in very ‘queer colours’ and covered in ceramics that represent different buildings. Although large, they fit in with the vertical nature of Croydon, which since the Nestlé Tower in 1964 has been populated with skyscrapers. All this bodes well for the future, and while there’s a refusal to describe themselves in terms of being ‘successful’, Furman admits they are ‘overachieving’ and ‘overshooting’ on their current plan. In fact, having a plan at all is a new development, Furman says. Having graduated just as the financial crisis hit, Furman has finally moved on from ‘desperately trying to get opportunities I thought would be good, and then milking the hell out of them when I managed to get some of them’. Over time they have also learnt what works creatively – and crucially, financially – for them, thanks to some sage advice from the ever-generous fellow designer, and something of a mentor, Morag Myerscough (profiled in FX October 2019). Looking at Myerscough, Furman comments: ‘[She] has learnt what she really likes doing and has managed to narrow it down. I’m still at the stage where I’m doing quite a few different things…’

At this point Furman is in a good position career-wise – ‘Honestly, I’ve not been this happy in a long time’ – and with a whole host of projects on the go, the designer is making some excellent work that will bring colour and mixiness to a wider audience.