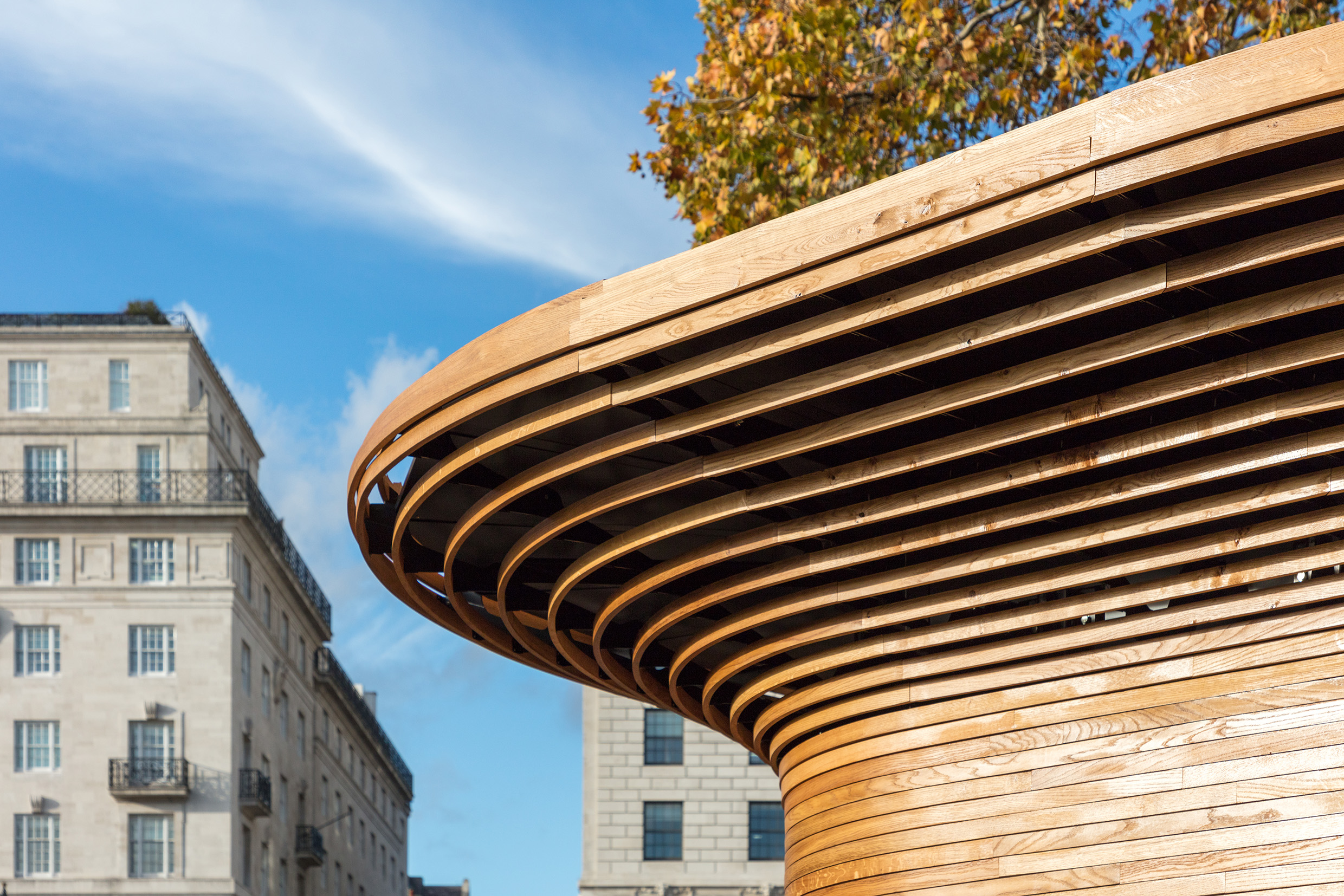 The founding director of Mizzi Studio discusses his multi-disciplinary studio, and how nature and sci fi come together in its work

There is a line that science fiction treads – between fiction and reality, between narratives of the not yet possible and the scientific and technological advancements towards making something possible. Although things may get toned down in the transition from fantasy to real life, for those willing to try there are ways to blur that line.

In his career, sci-fi fan Jonathan Mizzi has moved between fantasy and reality: he first went to study film, Mizzi says, because he was ‘interested in futurism and science fiction, and all the unrestrained lack of financial constraints when you are designing the built environment in a movie, and the lack of technological constraints’. From there he wanted to work on something more tangible – or he ‘grew up’, he suggests.

Design and architecture have long drawn from a conceptual element, whether in the drawings of Zaha Hadid or the books of Rem Koolhaas, and the conceptual is still a component of the educational establishment’s end-of-year shows, where unfiltered ideas from fresh graduates can still be something of wonder (although the industry is seemingly split on the relevance of these for professional training). Mizzi himself studied at The Bartlett, UCL, where his exploration into neo futuristic design won him a commendation for his work, and perhaps the confidence to continue in this vein. His earlier forays into the working world were in media architecture or conceptual roles, and the names on his CV include Jason Bruges Studio, Cinimod Studio, and Foster + Partners, where he worked in concept design. From here, he set up his own studio, and as Mizzi tells me, it was actually through these media architecture projects that he won his biggest commission to date – the Royal Parks kiosks and Serpentine Coffee House for the Colicci family, who also employed him to design their copper-roofed kiosk outside Westfield Stratford.

Mizzi Studio has been multidisciplinary since setting up seven years ago. Its small but dedicated team – made up of Matt, an industrial designer with a vehicle design background; Silvia from product design; Ashwini, an architect; and Mizzi’s own mixed history – mean it approaches a project from all angles. The range of jobs the studio takes on utilises these varied talents: as well as the kiosks and cafe in the Royal Parks the studio has also explored furniture design with the Awkward Table (inspired by a yoga pose), designs for new electric buses in Malta, interior elements such as sculptural staircases, or simply sculptures. One example of the latter is the Mondrian Hotel spa in London, for which Tom Dixon approached Mizzi Studio for a centrepiece. The resulting design is a suspended copper-leafed fibreglass sculpture depicting a water droplet. Mizzi names his role models as the polymath Thomas Heatherwick, Zaha Hadid with her impossible-seeming parametric forms, and Chinese practice MAD architects, which is currently working on what would have been Mizzi’s dream project: the Lucas Museum of Narrative Art in Los Angeles (founded by filmmaker George Lucas of Star Wars and Indiana Jones fame). These influences are visible in Mizzi’s oeuvre, but his own work differs because he is interested in retaining a human touch. This manifests itself in his projects, through a combination of complex modelling using computer-aided technologies but with hand finishes.

The Serpentine Coffee House provides a useful illustration of Mizzi’s approach. Due to its proximity to Zaha Hadid’s Serpentine Sackler extension he consciously made a visual connection between her design language and his own. The undulating canopy is made using state-of-the-art technology, while the eye-catching silhouette of its roof is meant to represent ‘the serpentine creature that’s leaped out of the lake and has evolved into a smiling stingray’. It is closer to nature than Hadid’s design, with hand-patination to complement the animalistic features of a ‘ridged back’ and ‘reptilian underside’, while the idea of a smiling stingray jumping out of a man-made lake seems ripe for a sci-fi story.

Mizzi’s love of nature was nurtured by a childhood immersed in natural environments: Malta in the school holidays, with term time spent at a boarding school in the Somerset countryside. He has also spent time in London, living with his family in Golders Green, and later Chelsea, where he appreciated west London’s scattering of green pockets of land. Now, currently settled with his own young family in west of the city, he has the pleasure of taking his young daughter for a walk in the Royal Parks, right past his studio’s creations.

This year has been particularly busy for Mizzi with the birth of his child, the opening of a studio in Malta, and a lot of travelling back and forth. He hopes the situation is on its way to a more positive and workable balance, perhaps with the time split between London and Malta following the same pattern of his childhood years, with the school holidays spent in the sun. London will remain the base for Mizzi Studio – the Maltese team of architects and designers will lead the projects in Malta, while the London team will add in the signature sculptural and innovative elements of the kind they have been honing for the past seven years. Mizzi’s proposal for a fleet of electric buses in Malta is in the conceptual phase. Image credit: Stargate Studios / Mizzi Studio.

Mizzi is socially minded, and, believing in the sustainability of his approach, hopes that the more work he can get, the more positive impact he can make. While impressive, much of studio’s work is currently on a smaller scale, and he would like to pursue larger civic projects – one ideal commission, albeit regretfully stalled at present, is the Chiswick House School in Malta. Using an innovative ‘pod and openclassroom approach’, the school, as Mizzi explains, will be 70% in nature, so children can thrive in their natural environment rather than being separated from it.

Mizzi is conscious about the reality of Malta’s current drive for a more developed future; he intimates that overdevelopment is rife and that building is occurring beyond permitted development zones. His interest and knowledge in this area is no doubt cultivated by his family, as his mother and maternal grandfather operated the biggest NGO in Malta concerned with the built environment. Arguments over the kitchen table ensued, and Mizzi says there is perhaps only one project on which he and his mum agreed. That project is a long-running pro bono effort to design new buses for the country. The old buses were unique and much-loved: colourful (colour-coded due to Malta’s high illiteracy rate in the aftermath of the Second World War), but also owned by the drivers and personalised to the max – he likens them to the customised cars of TV show Pimp my Ride. For Malta, joining the EU meant the environmentally damaging buses – also lacking disabled access and automatic braking systems, says Mizzi – were banned. As for a replacement, for a while the Maltese were saddled with Boris Johnson’s unpopular ‘bendy buses’ – even less practical on Malta’s winding roads than they had been in London when Johnson was mayor of the city.

Mizzi’s own proposal for a fleet of electric buses is a project the studio has been working on for seven years (on and off, in the time it could afford). The project is still conceptual, and the end point for now has been the exhibition of a whole fleet of the bus models in Malta’s capital Valletta earlier this year. Yet it has seized press and public imagination, and has been steadily gathering support. When a government minister asked Mizzi ‘how much would it cost?’ it dawned on him it might have more of a life than he dared to hope: proof, seemingly, you can really will a project into being. Mizzi mentions he is keen to work elsewhere around the world and is currently recruiting for a business development manager in Los Angeles. Already, he has had the chance to work in India on a project for fashion brand Saloni. For its first Indian project – creating a temporary structure that has now been made permanent, for the Holi festival – the studio used its approach of mixing craft and digital expertise, with the structure made employing local, traditional techniques and designed with computer-aided technology.

As for pursuing the fantastic science-fiction ideas that have long captured his imagination, Mizzi points out that it is already present in the work. The studio does produce idiosyncratic and fantastical architecture – for example, ‘the tree-like sculptures of the kiosks’, which Mizzi describes as ‘gestures, frozen in time’. To that category we might add the leaping, smiling stingray, and the Mondrian spa’s water droplet suspended mid-drop. These freeze-frames of Mizzi’s fantasies are each a tantalising glimpse into the future and leave you eagerly waiting to see what comes next.