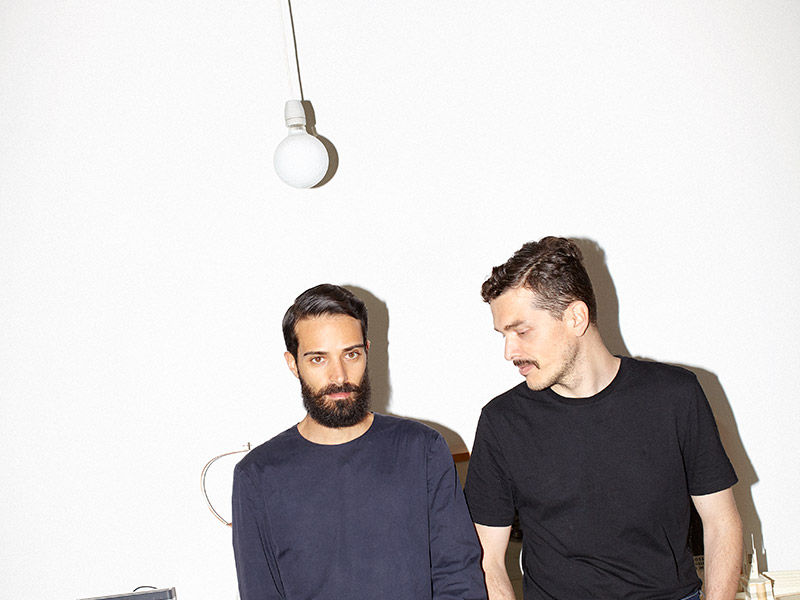 FX spoke with Andrea Trimarchi and Simone Farresin, the duo behind experimental design studio Formafantasma at the launch of their new exhibition Cambio

It can be hard to reconcile the divide between theoretical and research-led work and its practical applications in design. Yet successfully straddling this divide for a decade now is Formafantasma, a Netherlands-based Italian design duo made up of Andrea Trimarchi and Simone Farresin, whose work can be found as easily in a gallery as in the commercial showrooms of lighting designers Flos or tile company Dzek. The pair are designers, but take a critical stance in their own work and towards the profession as a whole. That stance involves asking questions such as: how do you properly understand the implications of the products you make and use, and how do you make that both tangible and interesting to your audience?

Their latest project to ask these questions takes the form of an exhibition for the Serpentine Gallery in London. This is the art institution’s third-ever design exhibition in its entire 50-year history (following Konstantin Grcic’s Design Real in 2009/2010 and Martino Gamper’s Design is a State of Mind in 2014), which suggests Formafantasma must be doing something special. Describing the studio as representing ‘one of the most important and innovative approaches to contemporary design working today’, the Serpentine’s artistic director Hans Ulrich Obrist explains that the gallery was interested in documenting the duo’s ‘way of thinking’, rather than wanting to display their finished products.

This exhibition is titled Cambio, which is a reference to the cell-producing cambium layer by which a tree grows – its membrane producing rings of wood on the inside and bark on the outside – but is also from ‘cambium’, the medieval-Latin word for change or exchange. These two references explain the scope of the project, which simultaneously looks at trees as living organisms and as raw materials for products. Labelled wood samples of the 19th Century Economic Botany Collection, a number of which are now extinct

The question of how one becomes the other requires careful consideration in an era where the catastrophic realities of, and reasons for, climate change are becoming (almost) undeniable. Formafantasma’s investigation digs deep to explore in all directions, building on a process the studio established for a previous project, Ore Streams, which looked at the global implications of electronic waste. The difference here, as Farresin explains, is that with timber ‘you are also working with a living species, and that for us was making a difference because that introduces other questions ... suggesting that we also need to think, as designers, not only of the needs of humans, but of the needs of other living species’.

The subject matter is certainly rich for exploration. Products made from wood have long been embedded in daily lives, as cherished luxury items, tools, or throwaway objects. Wood also remains relevant and interesting to Formafantasma’s design industry contemporaries, this age-old material still evolving in the hands of designers and manufacturers across the full gamut of the design industry – from Ikea to luxury furniture brands, whether designing a side table or a building constructed with crosslaminated timber.

But Formafantasma has not set itself an easy task in choosing this subject for its latest project. The global timber industry is what Farresin describes as a ‘hyperobject’ – a subject so large that it is hard to understand. To an extent, the aim of the exhibition is simply to try and map it out for the gallery audience, by zooming out to consider the subject as a whole, ‘looking at the tentacular structure of the timber industry’, as Farresin explains. One example of the duo’s innovative work are these water containers made from cows’ bladders. Image Credit: Renée De Groot

Formafantasma started by looking closely at the clues held within the wood itself. For this it collaborated with dendroclimatologist Marco Carrer (taking samples from trees to determine past climate conditions), wood evolutionist Pieter Bass, and forensic analysts from the Thünen Institute in Hamburg to trace the origin of finished goods imported into the European Union – exposing the high rates of illegal logging used for goods ranging from charcoal to musical instruments.

Perhaps the latter is most shocking to those within the design industry as it shows how hard the origin of your materials can be to trace. The exhibition highlights various causes, from a lack of documentation and regulation to how technology such as KeyShot has allowed designers to specify timber that should not be used, but the exhibition also shows that the cause can also be a (misinformed) snobbery at the design stage: in violin making, rare hardwoods are still used in place of more sustainable softwoods as a measure of ‘quality’ despite evidence to prove that the same sound can be achieved with both.

Formafantasma also looked back a few hundred years to investigate the roots of the current situation. A whole side of the exhibition is dedicated to Kew Gardens’ Economic Botany Collection. First exhibited for the Great Exhibitions of 1851 and 1862, this is an exhaustive catalogue of worldwide species of wood going back centuries, with at least one example already extinct by the time it was labelled for the collection in the 19th century.

As the name of the collection suggests, this catalogue was not educational, but commercial, listing different types of wood for the 'enterprising' Victorians to make into products to be sold. Highlighting the role of the designer in this, the exhibition shows that those products might turn out to be furniture, the best examples of which can be found in another nearby Victorian-era collection – that of the Victoria and Albert Museum. Making the parallel between the two clear, and indeed the role of both in historic deforestation, Formafantasma exhibits both the wood samples and a video of the V&A archives under the title The Archive of Lost Forests.

The exhibition shows how these impressive and useful Victorian-era archives were only built thanks to colonial power, and that building such encyclopaedic collections comes at a cost to the people and the ecosystems from which resources were taken. Other exhibits document how power within the timber industry still lies along the lines of empire, and the global south still suffering disproportionately, whether through the immediate destruction of their habitat through deforestation or the effects of the growing climate emergency.

While it is easier to condemn some of the practices that go into the design and manufacture of wood products, the exhibition also reveals the messiness of the subject matter as a whole. Formafantasma is open about the fact that even in making this exhibition the studio and its collaborators are also benefitting from those same resources, more than 150 years after they were made.

Of course, an exhibition does not give the time or space to be exhaustive on a subject as big as this one. Similar perhaps to another current exhibition on an even more sprawling topic – OMA/AMO’s Countryside: The Future – Formafantasma therefore chose to deal with the subject matter via specific access points, working with collaborators from different disciplines, global locations and viewpoints to target the subject as a whole – Farresin likens the process to that of acupuncture.

So what does it mean for Formafantasma as designers? They stress that the choice to work across disciplines rather than within their own is about ‘enlarging the conversation’.

Formafantasma also believes cross-disciplinary collaboration via informal interviews is able to elicit brand new connections – things that ‘you cannot find published’. says Farresin. ‘[Scientists] are often not free to make associations or speculations about their own discipline. When you converse with them, those limitations are not there anymore, so you gain things, you learn things that are not actually on paper.’ This, he explains, is a process that is becoming increasingly important to the duo.

They are now looking to education to transform the profession of design, and explain that this project and the processes behind it will inform their new Geo-Design Masters at the Design Academy Eindhoven. A trunk, cut in slices, shows the first step of the production process of timber

Returning to their alma mater to set-up the course, the pair explain that they hope to show the students that ‘this can be a way of working’, perhaps even saying ‘take this, this is yours’, regarding this very project, handing the baton over to their students. They hope those students will be a diverse group, who, as Trimarchi explains, will ‘not only interested in product … but looking into the infrastructure where design performs’. Farresin elaborates: ‘Our aim is that designers will be able to work on different scales, so we hope to have people who will address ecological issues on a product level, and I would say that could be a short-term solution; students will [also] be able to operate on a more systematic level [or] maybe on a visionary level.’

What exactly this will look like is hard to tell, and the duo believes the course will go through a vital process of maturation over its first few years. As for Formafantasma’s own studio, Trimarchi says: ‘For us in general, next year will be a way of restructuring.’ This might also deal with a criticism sometimes levelled at them. As Trimarchi puts it: ‘We are a commercial studio that does research. So what does that mean – how can we make that more clear? … How can we divide the studio in a way that it can become much more radical on one side, and then having those radical ideas infusing the part which is more commercial.’ The duo muse that perhaps they will change the studio’s name to differentiate the two part, or that perhaps nothing will really happen at all.

As this exhibition shows, like the subject matter at hand, what Formafantasma does is complicated, evolving and hard to pin down. Whatever the answer, interviewed just before the exhibition opened, Farresin and Trimarchi seem in a good place. They described how they had begun to see more positive futures through the process of building the exhibition and found the process – particularly the interviews with their collaborators – enlightening and ‘a joy’. They are excited to continue the project both through their teaching and own studio work, but in the short term, they were visibly happy to speak again to some of those collaborators at the exhibition launch later that evening.