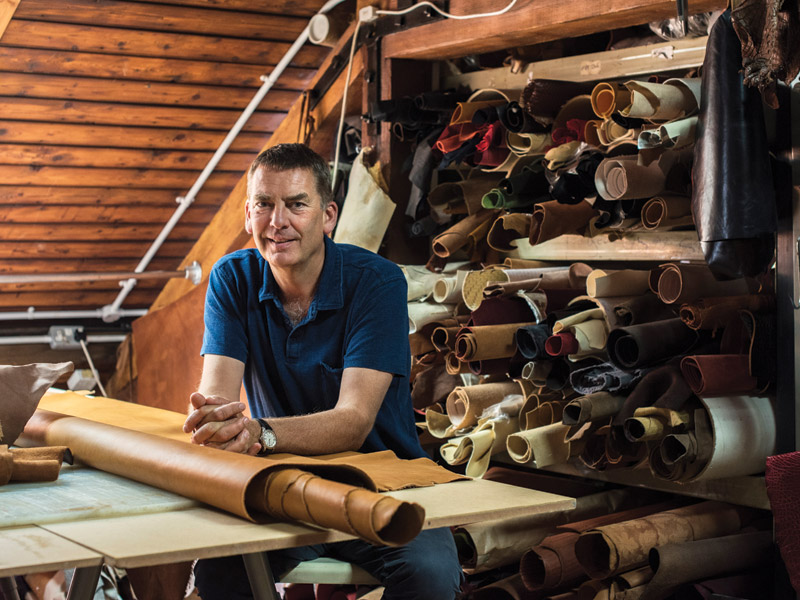 'You don’t fight it, you work with it.' We visit Bill Amberg Studio to see what 30 years in the industry has taught him about what leather can offer

Bill Amberg Studio is simply one of the most inspirational places to visit in London. It’s something I wouldn’t have imagined myself stating as, well, being a leather worker, there’s only so much you can do when working in leather, right? Wrong. In fact I couldn’t be any more wrong, especially where founder Bill Amberg and his talented team of designers and crafts people are concerned. I went to visit them at their workshop in northwest London during the run-up to London Design Festival, where the Bill Amberg Studio launched Print, an exciting designer collaboration showcasing digital printing technology on whole hides: destined for an interior design project near you. The use of animal hides in the production of leather dates back millennia, making it one of the longest-serving materials to mankind. Interestingly, its application hasn’t evolved much as we still use it for clothing, footwear, harnesses, ornamental features and parchment (perhaps not so commonly anymore) among other uses. ‘Well that’s what’s so fascinating about it; the earliest tanneries were recorded 30,000 years ago and it’s an extraordinary material,’ agrees Amberg. ‘And the more you work with it the more you realise what you can do with it, as well as the immense variety of leather that’s available.’ Amberg, who has spent more than 30 years in the leather industry, describes his long interest in leatherworking. It was while travelling in Australia he was taken on as an apprentice in Adelaide. Returning to London he set up his own studio. It started out making bags, which he said seemed to be a good commercial move, but gravitated to the interior design sector due to the influence of his parents – his mum an architect for Alvar Aalto and dad a lift and escalator specialist with his own business. He says: ‘We were among the very first few people to start looking at using leather in a different way, and people have now realised that it is very practical as well as aesthetic: it is extremely quiet and warm, it had a great variety in terms of surface texture and, historically, there’s a lot you can do with it terms of embossing, painting, gilding and embroidery. I became intrigued with what we could do.’ Today the business is built around leather for use in architecture and interior design and it seeks out craftspeople who can utilise various traditional techniques. But having moved well beyond the boundaries of a standard leather upholsterer the studio broadens the understanding of this material’s innovative application. The studio fitted a leather floor in Selfridges’ men’s shoe department, on the first floor, working with architecture practice Vincent Van Duysen Architects. It has been in situ for some 10 years and it still looks beautiful, more so owing to its natural patination. ‘It’s very warm and its thermal properties are excellent. It will heat up cold surfaces with no problem and it doesn’t generate any dust,’ says Amberg. Leather can be finished with various waxes, oils and varnishes to give an almost synthetic quality to it, which will create something incredibly durable (think of a leather car seat for example), but will take away a lot of the natural material’s characteristics. It’s something that Amberg is keen to avoid, and by doing so his work has a reach-out-and-touch quality to it. Woven banisters, beautifully stitched door handles, hand-knotted lights, hand-painted embroidered curtains and leathers with shimmering finishes are just some of the many pieces which I see when walking around his studio. Last year saw the studio complete projects at the Royal Academy, Westminster Abbey, and Harrods, but there’s an air of excitement surrounding a project, two and a half years in development, called Print. ‘It was born out of an intrigue of surface finish on leather,’ explains Amberg. ‘We have developed lots of finishes using traditional techniques, but this is moving into something which used a modern technology.’ The studio spent two years working with a tannery and printer in order to develop a print adhesion which is perfect across the whole colour spectrum, supplying good UV protection and durability. To showcase the new offering, the studio teamed up with five designers to launch it at LDF. Tom Dixon, Faye Toogood, Timorous Beasties, Alexandra Champalimaud and Natasha Baradaran each produced ranges for use in commercial, hospitality, residential and marine projects, revealing a completely unique new product introduced to the global interiors market. ‘As new technology develops it exposes what is available in terms of materiality to us,’ says Amberg. So we can start playing with format and looking at new ways of using it as a surface material. And that is, in part, down to the development of new tannage within the past eight years, which gives us new opportunities for surface treatments.’ Walls at Harrods, 2018, by Bill Amberg Studio, for Rundell Associates

While digital printing on leather has been around for a little while, it is a process that has seen a poor print adhesion and scratch resistance. ‘There’s also no real consideration given to the leather, so I was very interested to see whether we could develop a leather that was specifically made to take a digital print’, says Amberg. Walls at Harrods, 2018, by Bill Amberg Studio, for Rundell Associates

Using this new cutting-edge technology to digitally print on to a whole hide is done so without masking – or destroying – the characteristics of the material. So while this opens up new design possibilities, it also works beautifully alongside traditional leather-making craft skills.

‘Leather is a beautiful and sympathetic material to use and it really wants to do something with you as a craftsman: you don’t fight it, you work with it,’ says Amberg,‘And that’s really rewarding.’