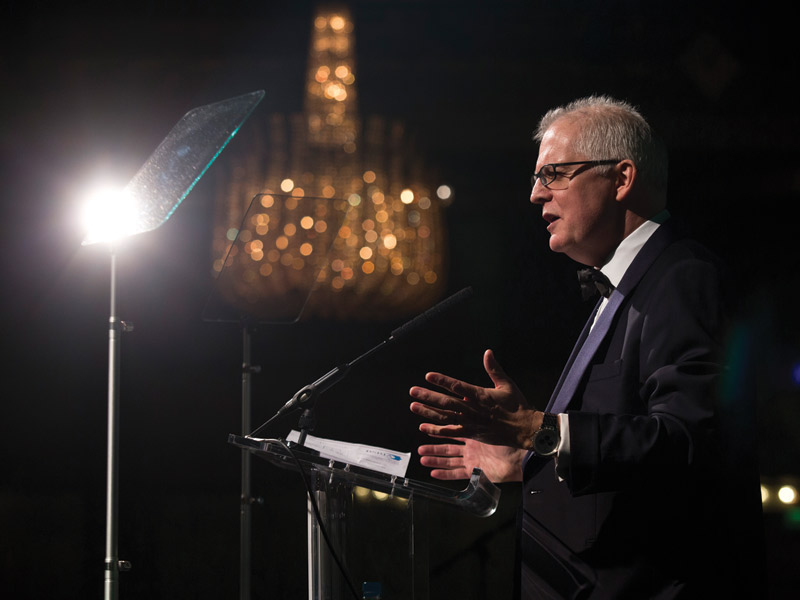 The career of Ken Shuttleworth, awarded for Outstanding Lifetime Contribution to Design in the FX Awards, has taken him across five decades, three continents and two major architecture practices – first Foster + Partners and then Make Architects, which he founded in 2004

Ken the Pen was the nickname Ken Shuttleworth earned at Leicester School of Architecture for his innate ability to draw far more quickly than anybody else. Going through Rotring nibs at an unprecedented rate, he says he owes his career to being able to draw, and draw quickly, from a young age. Catching up with Shuttleworth in Make’s London office, he flicks through his latest sketchbook, just a few days old and already brimming with sketches and ideas ready to be refined and shaped into new pieces of the city.

There was never any doubt that he was to be an architect. Growing up in Birmingham in the Fifties and Sixties, he saw the industrial heartland that had been torn apart by war completely rebuilt. ‘There was this major move to completely replan it. It was like this brave new world with big roundabouts and flyovers. It was really exciting,’ Shuttleworth says. ‘There’s this can-do attitude of Birmingham. We basically just get on with it. I think drawing and designing in Birmingham was probably one of the biggest influences on me.’

Shuttleworth had spent three decades shaping the London skyline with some of Fosters + Partners most notable buildings when he left to set up his own practice, Make. In 2004, already with a successful career established, he was fuelled by a desire for something new, and Shuttleworth decided to go it alone. He was not alone for very long, however: ‘It was just me in the morning and then there was two by lunchtime, and there was about four by the evening,’ he recalls.

Having already delivered Hong Kong Bank, City Hall, the Millennium Bridge and St Mary Axe (among many others), Shuttleworth would have been permitted to take with him a confidence that any company he started could take on the industry with ease. Yet it was only the added security of being offered 12 jobs on deciding to leave Foster + Partners that really cemented his confidence to set up on his own at all.

Shuttleworth said: ‘I thought, “Well, I might as well give it a go on my own because, if it goes pear-shaped, three of them might still offer me a job” and literally that is the way I decided to do it.’ In the 14 years since, Shuttleworth has built a design empire that spans sectors and continents to bring the industry 68 buildings, and counting.

Throughout this journey, he has retained this quiet modesty, choosing the name ‘Make’ rather than his own name, as he has no wish to take credit for the wealth of knowledge and hard work that takes place in the Make studios across the world. He sees it as ‘that movement away from the single architect with his name on the business, who’s like a sort of maestro artist and then everybody else is just working under them on a slave-labour basis almost.’ After establishing Make as a respected practice in the UK, Shuttleworth looked further afield and established a Hong Kong office. While he saw the opportunity for expansion and fame in the Asian market, it is the vibrancy of the area that he finds most exciting. With a much more relaxed planning system, operating on prescribed building envelopes in which the architect is free to design, Shuttleworth notes how this is used to drive innovation and originality: ‘Everybody in a way is outcompeting each other to produce a better building, so I think you get a better result.’

Through Make’s network of studios, Shuttleworth has endeavoured to form a culture of collaboration and education. The ‘makers’ frequently have the opportunity to visit or move studios, allowing the company as a whole to learn from the different markets they are part of.

With a much quicker pace in the Asian market, the Hong Kong studio facilitates plenty of opportunities to learn. ‘Everything happens faster in Asia so you have to be much quicker, more nimble. You are moving quickly from sketching to on-site so you have to get it right early on,’ says Shuttleworth.

This culture of sta. self-development and improvement has been present in Make since the beginning. ‘The only real asset we have as a practice is our people,’ explains Shuttleworth.

From the very start, Make was about all the staff and the contribution that everyone makes. Shuttleworth reflected this in Make’s business strategy, setting up as employee-owned and being the first architecture practice to do so.

This desire to do things differently led Shuttleworth to adopt the John Lewis model: all staff have a say, a profit share and ownership. Shuttleworth happily signed away his ownership, placing shares in trust and, in return, everyone works together and helps each other, and consequently everyone is rewarded.

For someone who came to the industry through a love of drawing, Shuttleworth has nevertheless embraced technology and all it can facilitate in practice. He looks forward to the onset of artificial intelligence and embraces what that means for the practice being able to draw in 3D. ‘A whole world will be created for us in the goggles,’ he says. Alongside this, through his presidency of the British Council for Offices, he has been pushing to digitalise its specification to provide a much more accessible platform that can be interrogated for information. One of Make’s most recent successes is the completion of Rathbone Square, where he has praised the work of the developers, which he believes are too often seen as the ‘bad guy’.

He says: ‘You’ve got to balance making a great place for people; half the site is given over to the public and that’s quite a big move from the developers’ point of view.’ Working with Great Portland Estates on the development, Make Architects was afforded a freedom to design a great public space that the developer understood the value of. ‘Some developers would not do that; they would just fill the whole thing up with development,’ he says. ‘But Great Portland Estates is very conscious of what it is doing, and it loves what it does and it wants to create great places. And also it believes great places will create better value for its buildings.’

Shuttleworth says the aim at Make is to try ‘and make the buildings touch the planet as lightly as possible’. With UBS’s new HQ at 5 Broadgate, its biggest project to date, Make has achieved one of the lowest-energy buildings in the country. This drive to be sustainable he mentions as one of the biggest challenges and successes in the industry right now. Having made huge advances in the industry in the impact it has on the planet, Shuttleworth notes that the next challenge is to reduce the amount of plastic used. ‘We’re looking at [sustainability] on all of our projects in terms of the materials that are actually on the project but also wrapping materials, and to be honest it’s quite difficult.’