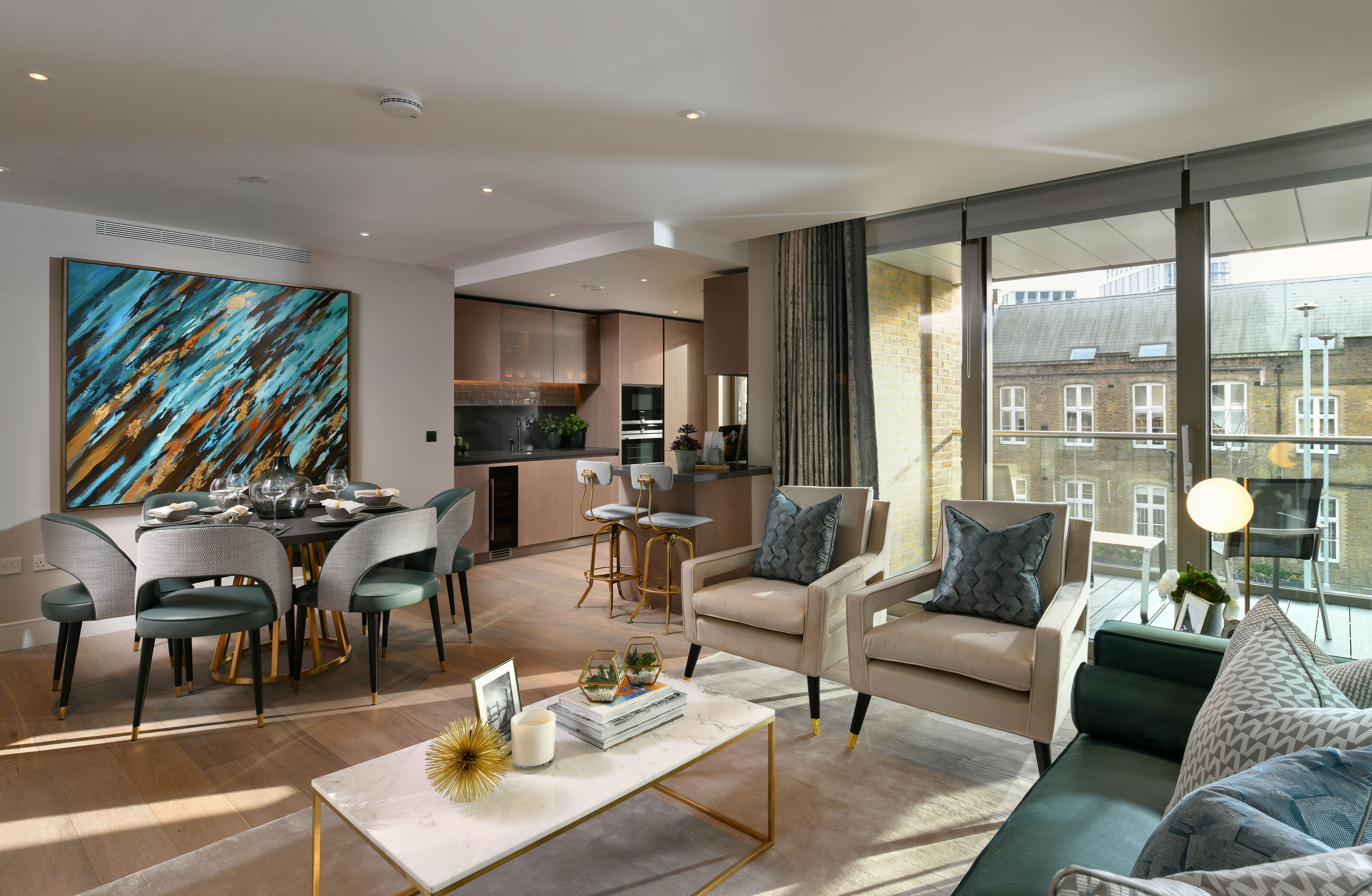 We visit Prince of Wales Drive, a new development in Battersea by St William, and find out more about its new phase: Bowden House.

St William – a new joint venture launched by the National Grid and the Berkeley Group – claims that all its sites ‘start with the landscape’; the first of its developments is a prime example of how the developer puts this aim into action. Set beside Battersea Park in south London, St William’s first development, called Prince of Wales Drive, is spread over five acres of land that previously belongs to the National Grid.

Within the residential development, 955 new homes have been created in a cluster of buildings designed by Squire and Partners. Half of the site, however, is taken up by the extensive gardens; these run through the centre of the site and will eventually link through to Chelsea Bridge and Battersea Park itself. Previously, the site was home to a collection of gas holders, and the land was privately owned. St William is opening the site to the public, with the hope of “stitching it back into the community”, says Sean Ellis, the chairman of St James and St William.

Across the site, the design takes reference from the gas holders, which have since been removed. All that remains of them is a small section of metal lattice work – refurbished and cleaned, this will be a memento to the site’s industrial past and act as an entrance feature to Prince of Wales Drive. As well as 955 homes, the new development also has a “comprehensive set of facilities for the residents including a pool, spa, concierge, and resident’s roof terrace.”

Ellis explains that there is “about 100,000 square foot of commercial space running around the base of the buildings… We're targeting food retailers [for it] because there is quite a lot of opportunity for people to sit outside.” Running through the middle of the development, the gardens have been designed by landscape architects, Gillespies. “We believe that the spaces between the buildings are equally as important as the buildings themselves,” says Ellis.

Gillespies has created a masterplan for a range of outdoor spaces, each with layers of foliage and different types of plants. “We wanted something that would look good all year round,” Ellis remarks. “Even if it's not in bloom, in the winter the gardens still look great because you have evergreens creating layers of colour.”

St William has recently launched the second phase of the Prince of Wales Drive project with the introduction of Bowden House. Comprised of 90 one, two and three bedroom apartments, the new phase offers buyers spacious open plan living; each property also comes with a covered, private terrace or balcony, and most look out over the gardens.

“We made the conscious decision to make the apartments larger than the minimum design requirements, across the board,” Ellis explains, discussing the development’s architecture. “We’re generally between 10 and 15 percent larger than the space standards that are required in the London plan… We had the opportunity to create the extra space, so thought that we should do that.”

Each apartment features floor to ceiling windows, allowing for plenty of natural light, and Ellis mentions that St William chose to put sprinklers in all the buildings so that the architects could create apartment designs that didn’t include an internal corridor. “There are no doors between the entrance and the rest of the rooms,” he says. “Residents can have an open plan hall.”

Interior design studio Muza Lab was responsible for the apartments’ interiors, with the team creating a collection of palettes specifically for Prince of Wales Drive. Buyers can choose one of these colour schemes for their apartment, with each palette taking reference from the surrounding landscape and the site’s industrial heritage.

“We had a bespoke carpet made, and the door handles have a nod back to the gas holder’s design,” Ellis explains. “There is a horizontal pattern on the doors, which is reminiscent of the horizontal sections of the gas holders.” In the bathrooms, Muza Lab have created a “nod back to the industrial feel with reeded glazing”, and throughout the apartments the ironmongery is finished with bronze or nickel.

St William also commissioned Hunter Design to dress Prince of Wales Drive’s marketing suite and show apartment, with the team using Muza Lab’s bespoke colour palettes as a base for their interior dressing. Ellis says that Hunter Design was asked to use one of the pre-chosen palettes because, “increasingly, with the way that the market is, we are finding that [potential buyers] want to see product before they are prepared to commit.”

For its design of the show apartment, Hunter Design chose to use the development’s ongoing industrial theme as inspiration, as well as adding natural, biophilic touchpoints. ““It's all quite tonal and feels very calm,” Frances Hanson, head of interior design at Hunter explains. “We’ve got statement headboards in the bedrooms… beautiful marble lamps with brass elements… [it’s] industrial but quite soft and organic.”

Throughout the apartment, there are subtle uses of light and dark grey, turquoise, gold and brass, as well as different textures and finishes. “We [brought] in the greens from the park, and the textures link back to the lattice [from the gas holders],” says Hanson. “Everything was designed together.” Many of the furnishings in the show apartment are bespoke, as was the large artwork that takes up one wall in the living space.

Interestingly, Ellis notes that “the palette that goes into the show room is the one that most buyers pick, because they can visualise it.” With Hunter’s interior dressing, it’s no surprise that buyers appreciate the soft, nature-inspired colour scheme – and with a new tube station next door (due for completion in 2020), a multitude of green spaces on the door step, and a range of amenities for residents, Prince of Wales Drive may find itself becoming one of the most sought after developments in Battersea.