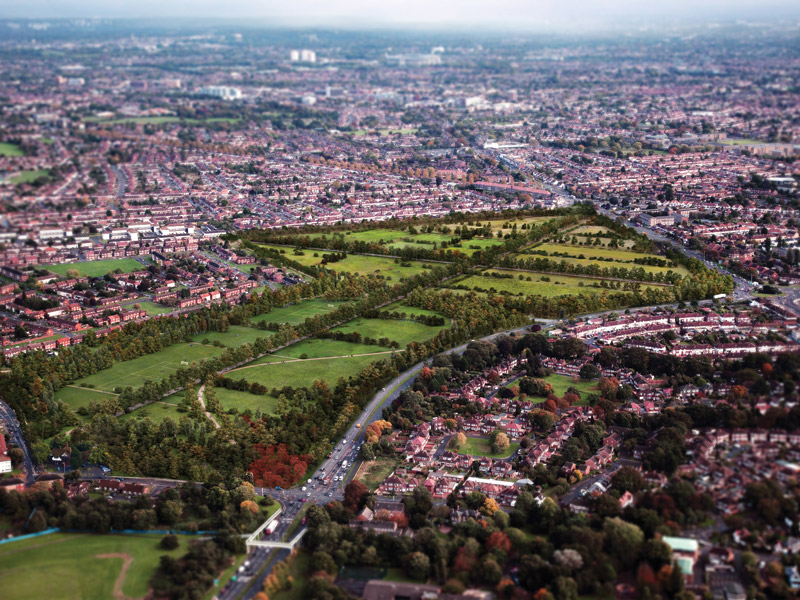 Carmody Groarke is currently working on its first tall building, first public park and first master plan — the latter two forming the Rectory Farm project. For an architecture firm whose bread and butter is smaller-scale cultural work, why the seemingly sudden diversification? ‘That diversity has always been there with us,’ replies Kevin Carmody, co-founder of the practice alongside Andy Groarke. ‘We’re not typologically driven.’

What’s more, Rectory Farm - a vision for a unique park in the London suburb of Hounslow — is not exactly a new project. The practice was commissioned in 2008, only two years after launching. It has been a long, winding road to where they are now, with the project recommended for approval by Hounslow’s planning committee.

The site is roughly 44 ha of disused, undeveloped, inaccessible agricultural land in private ownership. While some agricultural activities still take place it is hardly a thriving farm, seeming to cultivate fly-tipping more than anything else. It’s Green Belt land, though skirted by a major road, adjacent to a school and residential communities. One of its most significant neighbours, only 2km away, is Heathrow Airport. But it’s what lies beneath the ground that’s of more importance.

This unassuming plot of scrubland is, in fact, a gold mine for the construction industry: it is home to three million tonnes of gravel, the primary ingredient of concrete. The mayor’s London Plan has set out where the city’s most accessible mineral reserves are, and just how much extraction is needed; this site has been earmarked to help deliver the concrete London requires to keep building.

But an open-cast mining approach hits obvious problems in city suburbs: noise, dust and danger to name a few. What’s more, the resulting hole in the ground couldn’t be turned into a lake, as might usually happen, because of the risk of attracting birds so close to the runways. Due to issues like these, there was a series of failed proposals for how the project could work.

Carmody Groarke’s solution, however, is to contain the extraction work underground, while using a phased top-down construction process to excavate the gravel, enabling the ground level to be turned into a park, with berms with glazed sides letting light into subterranean areas. The completed extraction will leave the biggest underground space in the UK: 180,000 sq m. Uses for this are already under discussion: warehouses and distribution centres are the likely first step a ‘crucial resource for how cities work’, adds Carmody — but a variety of cultural and community functions are also being proposed. ‘The only other option for the site was leaving it as a landfill,’ Carmody says of the practice’s initial proposal, ‘and those aren’t good for anyone. The brief was to extract gravel: we just decided to add a park and warehouses.’ The sale of the extracted gravel, followed by revenue from the underground uses, will provide permanent funding to maintain the public park, which will deliver open recreational space in an area of public-space deficiency and deprivation in Hounslow. It will bring sports facilities, improve air quality, connect surrounding communities and improve access to the local school. There may be a zone of community gardens and a hobby farm too. And the whole project is slated to provide 2,500 jobs.

So could this be a model for how cities expand, especially in Green Belt contexts? The idea of building large, non-residential developments underground, freeing up space for parks on the ground level, almost seems a no-brainer. ‘But what financially balances this is that there’s a minable resource,’ Carmody says. ‘Without that, it wouldn’t be viable. Here’s a park paid for by economic strategy, rather than the public purse.’

Alongside project partners Arup, DP9 and Vogt, Carmody Groarke consulted with Hounslow council for some five years, and spoke to 10,000 local people. They also spoke with Sport England and the FA about the need for local sports facilities and how this project could fill some gaps (it also just so happens that recreational activities are considered a special case for Green Belt development policy). Strangely enough, no conversations have been had with Heathrow Airport, which might well be in need of concrete soon. Although the project has had to comply with the BAA safety zone so close to the existing runways, Heathrow has thus far not responded to attempts to initiate conversation.

The project must go through the GLA (which has already written a letter of support). If the master plan, outline design, and reserved matters application are approved, work could start on site at the end of 2018. The top-down construction method means the community would get their park within a year, with the whole process being realised over the next decade.

Carmody believes not enough architects are engaging fully with urbanism; it’s clear his practice wants to break the mould. With Rectory Farm the driving question for the practice was: ‘How can this space work harder for the city?’ he says. It is this quality that makes the project unique: it delivers multiple functions for different requirements at various times. Though we can’t keep finding minable mineral reserves just to make great parks, we can hope that architects continue to ask themselves this question, and that urban developments can go that little bit further towards answering the diverse and myriad needs of a modern metropolis.