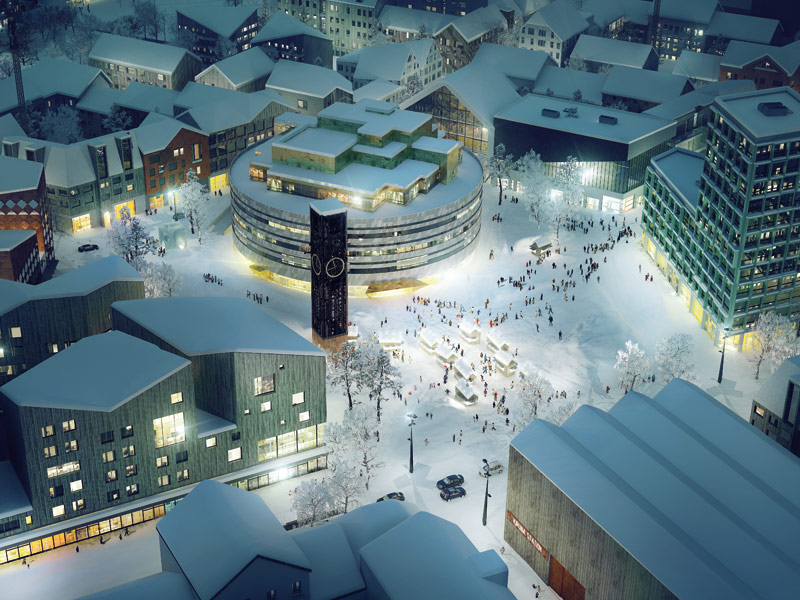 Veronica Simpson looks at co-design projects that through cooperation and collaboration, pay dividends for all concerned.

'Cooperation oils the machinery of getting things done,' says philosopher and sociologist Richard Sennett in the preface to his excellent book, Together. 'Cooperation is embedded in our genes, but cannot remain stuck in routine behaviour; it needs to be developed and deepened. This is particularly true when we are dealing with people unlike ourselves; with them, cooperation becomes a demanding effort.'

In few transactions is that effort more demanding than when highly educated architects are working on behalf of people whose expertise lies in very different areas than in the complexities of how to design or reorganise a building - be they school head teacher, hospital director or would-be house builder. This lack of shared experience and knowledge is probably the single biggest contributor to the acrimonious relationships that can develop by the time a project has completed. But stakeholder engagement is now becoming an accepted part of a building design process - with more than lip service paid to the concept.

There are, as Sherry Arnstein (author of the oft-used 'ladder of participation' hierarchy) pointed out, many shades of engagement in the creation of places, from mere consultation - a willingness to inform the public what they're going to get - to genuine collaboration with all parties allowed to contribute to the eventual design. When the latter happens - when clients and architects have reached a level of mutual understanding and shared objectives - it supports a move away from a 'risk averse', formulaic approach to design and facilitates the creation of innovative buildings and projects.

This is certainly true of schemes such as Kingfisher Court, a mental health unit in the Hertfordshire countryside. When project manager Dr Barry Trindall sat down with P+HS Architects Trindall made it clear that he wanted to create a building that promoted the 'recovery model' of care: to have the physical setting work actively towards restoring patient wellbeing. As such, says Trindall, 'one of the objectives [was] inclusion and discussion at all levels and involving the community in building, design and usage decisions'. This was most unusual, says Wendy da Silva, a director of P+HS and with 20 years of experience in healthcare design. 'But I can now see the benefit of it.' Some 2,000 hours were spent in consultation with various groups in the first three months alone. Over the project's course the stakeholder groups were consulted on all major decisions involving facilities, bedroom design, furniture choices, artworks, leisure and recreational facilities, even colour palettes. The huge amount of feedback and consultation required a rigorous communication programme so that all groups felt their points had been heard and dealt with.

Trindall insisted on a 'closed feedback loop. Whatever request was made, there had to be a response and, if possible, action.' What was also required was extra time for the architects to adjust the scheme, when issues were raised.

The resulting facility is an exemplar for thoughtful and non-institutional design. A low-lying series of buildings are set into the hillside, with bedrooms and communal rooms arranged around landscaped courtyards, providing greenery and views of nature from all angles.

There is no overt security; no dominating high fences or barriers. The programming of spaces is crucial in setting a more normal atmosphere and providing choice. Says da Silva: 'One thing was very important: places for chance meetings and contemplation. As you come out of a bedroom there are window seats. As you get better you might be able to go into the day spaces. There are therapeutic courtyards. As you get still better there are "streets" where you might gather, and places where you might meet your partner and children. Also [places]for staff and therapists and interaction between everyone here.' One of the most effective elements, however, in lifting this scheme well above the institutional norm, are the wooden doors and windowframes. Says Trindall: 'I don't like painted doors. You save almost nothing in terms of capital costs. Then you have got to maintain them and they don't provide the same degree of quality.'

Original art was also prioritised. Says Trindall: 'I think art is important in life. It should reflect in the buildings.' He appointed the Contemporary Art Society as adviser, which wrote a Trust Art Policy and proposed a shortlist of artists. From this the stakeholder groups chose artists Nicky Hirst and James Ireland. Their work on this site specifically addresses the needs and sensibilities of the patients, bringing an engagement with nature and texture, light and colour (as with Ireland's Sunset to Sunrise light-box installation), as well as with home (especially Hirst's delightful series of photographs depicting real people's mantelpieces and keepsakes), arranged along the walls, near seating spaces.

Partially occupied in summer 2014, by that November there were already remarkable results. Not only had aggressive incidents diminished, but Trindall reported a 65 per cent reduction in tribunal appeals: around 70 per cent of the patients at this facility have been sectioned (against their will), which often results in ime and cost-intensive appeals; not here.

One of the key factors in pushing through the more innovative aspects - especially to do with 'normalising' elements of the patient bedrooms (mirrors, opening windows, loo seats) - was a scaled mock-up of the room that was tested exhaustively. Says Trindall: 'When they [health and safety officials] came back to me to query any of the design innovations, I was able to say no, we have tested this.' But da Silva thinks that equally important was having one project manager - Trindall - throughout the programme: 'If we hadn't, it would never have retained that initial vision.'

In achieving true collaboration, Richard Sennett argues for a mix of empathy and clarity of vision - lashings of sympathy is not what's needed, he says, or decision-making can be severely compromised. But clarity of communication is also essential. It's this that helped inform the process through which Duggan Morris Architects achieved a landmark - and now multiple-award-winning - new building for the Maudsley, one of the UK's leading mental-health hospitals and teaching institutions. The Ortus building also emerged out of intensive workshops with the client and stakeholders, but in this case they didn't even know at the start what sort of building was needed. They wanted both social and educational facilities, in order to enhance connections between departments across the Maudsley campus and beyond. Duggan Morris was brought in right at the beginning of the process, spending a year in consultations with staff, patients and locals. There were some innovative ways of helping the client team along the route to the right building: on top of the more standard consultation mechanisms (in-depth interviews with 35 key staff, and site visits to centres of learning excellence and innovation around the world, including Cambridge University colleges, the Rolex Learning Centre in Lausanne by SANAA, the Young Vic, London's Maggie's Centre).

Duggan Morris prepared a series of books at key stages during the consultation to provoke discussion and establish consensus. It even produced a cartoon version of how the proposed building would look, feel and work for the people using it, in order to gauge reactions - and in the process, really immersing itself in the client world. But Genevieve Glover, managing director of Maudsley Learning (the education and outreach arm of the charity) remembers the crucial elements of consultation being 'whitesof- the-eyes stuff - meeting people face to face; gathering people together in a variety of locations across Camberwell and the campus'.

Gibson feels that this clarity of vision attained by the end of the consultation helped immeasurably, as did the simplicity and directness of the client- architect relationship, facilitated by the procurement process. As a non-NHS entity, the Maudsley Charity was able to procure the building through a PPC2000 contract in which the client and architect team retain control of budgets and subcontractors, rather than the usual NHS contract that delegates all power to an external contractor, whose primary objectives are financial.

The building is innovative in many ways, she says: 'The vision was about no barriers to entry: no reception desk, no glass window, no signing in, no security pass. We wanted it to be welcoming to all and giving everyone a consistently good experience.

'If I look round the space now, we have mums with their children from the school next door in the cafe, we have academics, administrators, people from the hospital. Earlier today we had some local residents. Someone from the hospital said it was a very democratic building. Everyone is welcome, and they feel welcome and make themselves at home.'

Culturally, the building has had an impact, says Gibson: 'Across the campus I think you will find that people who have clinical roles, or executive leadership, administrative roles, are probably coming across their academic peers more. I think the silos within each organisation are broken here. That has been not only facilitated by the building but also the work we're doing through Maudsley Learning - we're working with departments across the campus to convert to accessible learning, webinars et cetera. I think the environment here encourages people to think more freely.

Everybody notices it but whether it's to do with the openness or the light or the hum of activity it's not clear. Either way, It's a very good space for collaboration and creativity.'

Meanwhile, up in Derby, an immersive, hands-on co-design project has turned a museum into a space for collaboration and creativity, in conjunction with the local community. Derby Silk Mill Museum worked closely with co-design specialist Studio Tilt to create an innovative new model of a museum, where local skills and making are displayed and utilised alongside artefacts (see case study), sparking a whole new conversation between exhibits old and new, and generating a new community of makers, some of whose output is now being sold in the shop. Says Studio Tilt director Oliver Marlow: 'Co-design is about challenging hierarchies anyway - knowledge hierarchies too. You have all those people who walk into a provincial museum in Derby and they're not even that happy with the [usual] kind of museum atmosphere and expectation of how to act. You try and challenge those hierarchies and people get excited. They don't think for a second they are in a museum.'

Studio Tilt is well placed to observe the growing interest in this collaborative design process, with a growing client list embracing a range of sectors, from office to healthcare to education. Says Marlow: 'That free flow of inviting people to contribute...is the way everything is moving in the public domain.

From our point of view it's...about a structured and open way of engaging people around space and giving them the agency to have their ideas and needs expressed. That's not what usually happens in the way architecture is practiced - because it's so time and money dependent.'

It may be harder work, it may be more time consuming and it certainly requires a knowledge and experience of the tools for gathering and harnessing feedback, but the ultimate benefit of good, collaborative design is much greater buy-in from the community involved. As Sennett observes: 'Cooperation becomes an earned experience rather than just thoughtless sharing.' He concludes: 'As in any other realm of life, we prize what we have struggled to achieve.'