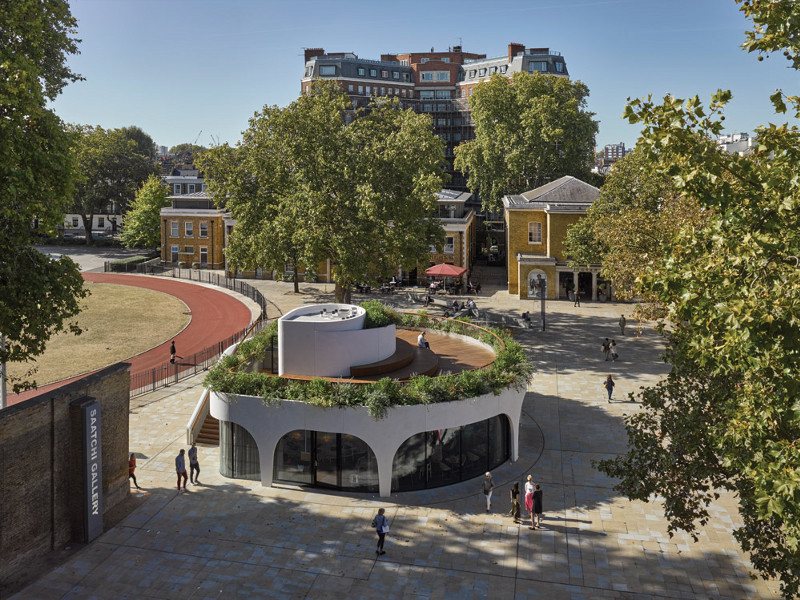 So, how did Nex do it? It held pre-application consultations to hopefully persuade the locals of the design without compromising the original vision, although, as Dempsey notes, there were some ‘worrying’ suggestions about the inclusion of Doric columns. There were also a few obvious points of contention: first, there was the issue of preserving ever-precious public space in the built-up city. If Nex was going to build, it was keen to compensate for any square-footage of public space lost, so took that space and raised it up, creating a terrace over the restaurant. This not only retained it, but offered the added bonuses of seating, a herb garden, and a unique elevated view. The site’s heritage was the other major consideration. Built in 1801, the Grade II listed Duke of York headquarters was originally an asylum for military orphans. Directly adjacent to the site of the new restaurant there remained a curved fragment of one of its walls, which used to enclose a grassy oval. Nex decided to work with, rather than against, this awkward fragment of wall, continuing its curve with a spiralling structure of its own. This spiralling wall forms the skeleton of the structure – if we follow it from the outside inwards, the outer edge starts with the stairs up to the roof terrace, continues curving inwards to form the restaurant perimeter, and continues, finally to encircle the concrete service core. The exterior wall is opened up with a colonnade of wide arches, which serve the dual purpose of filling the restaurant with light and opening it up to the public realm. This openness, however, meant that even the interior palette was under the watchful eye of planners, and is one of the reasons for the consistency of materials inside and out. The wall is a central feature of the design, and in white precast concrete with dolomite marble and quartz aggregate it forms a core element of the minimal, tactile material palette too. Continuing in this vein, the flooring is black terrazzo, while there is ash timber for the ceiling, which is also mirrored in the roof terrace’s timber flooring above. Restaurateurs and coffee roasters Caravan came along late in the process, and have opened the restaurant Vardo on the site. Its interiors, designed by Caravan, are in keeping with the neutral colours and natural forms, and include a linked series of curved seating booths that echo the building’s elegant colonnade.

The concrete walls, meanwhile, are weightbearing at only 15cm wide. For the work, Nex enlisted contractor AKT II (previously named Adams Kara Taylor), whom Dempsey had worked with on his first independent project back in 2008 – the DRL10 Pavilion in front of the Architectural Association in London – which used even thinner concrete components.

Another challenge was designing fully retractable plate glass windows that sink into the ground, so that in the summer the tables and chairs can spill out onto the pavement, while level access is provided for wheelchair users. Although such systems exist, this was the first in the world to use curved glass. Nex decided to go with the simplest solution they found, with supplier HIRT Metallbau creating a system similar to that of a weighted sash window.

Acoustics were a challenge too for a structure that Dempsey describes as being essentially like a drum – but having recently worked on the Royal Airforce Museum, with the rather extreme acoustic environment of an aircraft hangar, the team had learned a lot about what could be achieved. Overall, Dempsey is glad of the faith client Cadogan Estates had in his team. On winning the competition Nex had not built a great deal, yet was proposing an ambitious design containing elements nobody had built before. Dempsey’s own confidence was due to detailed forward planning, as well as his experience working for contractors – something he undertook between parts of his architectural training in order to have a holistic understanding of his profession.

Nex has created an attractive and enlivening addition to the Duke of York Square. Cadogan was keen for the site to have ‘something dynamic, a roof, that unfolded’, but Dempsey explains that ‘we just felt that that wasn’t really the right thing to do here’. Instead, the windows activate the space, blurring the divide between inside and out, while the roof garden above is planted with herbs that change throughout the seasons, scenting the air for those about to dine in the restaurant, or those just looking for somewhere to sit and relax in the heart of Chelsea.