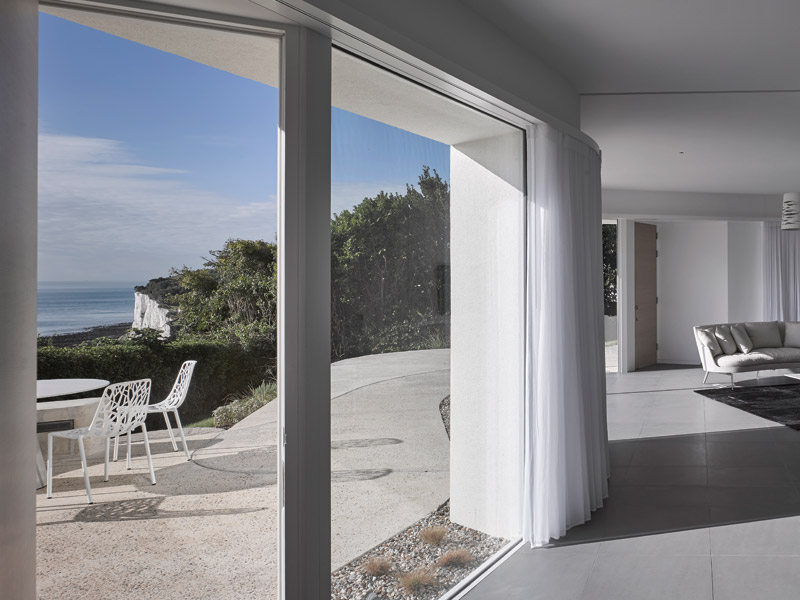 The sleek lines and curves of this new home for interior designer, Logan McWatt, by architect Tonkin Liu are inspired by its local history and stunning cliff-top location overlooking the White Cliffs of Dover, as well as philosopy from the Far East.

Looking out from sea towards the unmistakable folds of the White Cliffs of Dover the spectator might, with a sharp eye, spot a mini-White Cliffs perched atop the rise.

Ness Point is a new building which replicates the curves and undulations of the eponymous landmark at St. Margaret’s Bay. Six years in realisation, it’s the vision of architects Tonkin Liu for a client who wanted to celebrate the area where he grew up with a new house on the site of an original family home and also offer a nod to his Celtic heritage.

‘For Celtic, we took castle as a theme,’ explains Mike Tonkin, who spent much time with his partner exploring nearby Dover Castle, taking inspiration from its spiral staircase and super-thick walls punctuated by deep niches. The curved building is inspired by the undulating form of the cliffs and castle architecture, with deep-set, chunky windows. Photo Credit: Nick Gutteridge

Both features found their way into Ness Point, where the staircase is a simple semi-spiral, but the walls are incredibly thick, ‘650mm — like a castle,’ says Tonkin, to provide protection against the gale-force winds which can slam into the Channel-facing side of the house whenever storms whip up. The white house with its angled roof is just visible above the ragged clifftops. It perches just 50 metres from the edge. Photo Credit: Robby Whitfield The niched front wall, protected from the elements, is a mere 450mm thick; overall the insulation, combined with solar panels and an advanced heat recovery system, is intended to make bills for the underfloor heating negligible. The contemporary form is concealed from above by a rooftop wildflower garden. Photo Credit: Greg Storrar

Tonkin thinks of it as an uncomplicated design, ‘almost brutal, a simple, strong form’ — mainly straight-edged apart from the two-storey curved wall in the living-room and master bedroom above and a wall around which the staircase curves. But for the contractor there was also the challenge of a roof which twists as well as rises and is loaded with enough earth to seed a wildflower garden. The recessed windows and shallow balconies provide panoramic views of the sea, and occasionally the French coast in the distance. Photo Credit: Nick Guttridge

Despite the shock of the new in a street of Edwardian houses, there were no planning issues, Tonkin says: ‘The planners liked that the house was about Dover and the cliffs, and as we had just designed the Dover Esplanade, we already knew them.’ Yet it was not their experience of this coastal landscape which won Tonkin Liu the contract, rather the fact that Mike Tonkin, whose practice has a Hong Kong arm, had known his client, interior designer Logan McWatt, since they met in the Far East 20 years ago. The curved living room, like the rest of the house, is decorated in a pared-back, all white colour scheme. Floor-to-ceiling curved glass brings the outside in. Photo Credit: Nick Guttridge

Entering via a front door which slopes down from the road, the layout could not be simpler. A hall divides the staircase and a sunken den-cum-wine store — the only part of the site which was excavated — to the left from the kitchen, dining room and living room sitting parallel on the right. Above sit four bedrooms opening on to a gallery into which north-facing light floods via a skylight. Three of the bedrooms, all of whose sliding doors can be retracted on the ocean side, offering an outstanding panoramic view of the French coast in the distance, have integrated bathing areas. Shallow balconies, accessed by doors angled into the wall and lined with shingle planted with sea vegetation, are designed for absorbing a more immediate sense of maritime life than floor-to-ceiling windows allow: ‘Ferries go by all the time, and on a clear day we can see people on the beach in France!’ says McWatt. Those beady-eyed bathers would see on the Dover side what is hidden below the site — numerous wartime bunkers, although a gun emplacement moved from the garden to a prime spot on the undulating wraparound terrace pays homage to the area’s defensive history. The dining space sits adjacent to the living room and also looks out to sea. Photo Credit: Nick Guttridge

The master bedroom at the higher end of the house enjoys four-metre-high ceilings, while its en-suite bathroom curving behind has the wow factor of a twisting skylight which projects ever-changing sculptural shapes on to the walls as the sun moves around: ‘But the glass mosaic wall tiles, lit from above, were a challenge to get absolutely right,’ says Tonkin. McWatt got his wish of a tub from which he can enjoy not only views of the ocean but the run of cliffs for which the house is named. The bathroom features a curved bath, which echoes the sculptural, twisting skylight above it

British manufacturing innovation kept down the cost of the floor-to-ceiling curved glass, and with such vast expanses of glazing across the back of the house, extra-long runs of curtaining — black-out for the bedroom level, sheers for the ground floor — had to be made in lengths up to 25m. The narrow, angular stairwell contrasts with the large, open spaces of the rooms

The fact the house perches just 50 metres from the cliff edge did not cause undue concern, even though building was halted by a landslide further up the cliff two years into the project. ‘We stopped and did a lot of surveys and reckoned we were good for 400 years,’ says Tonkin. Nevertheless, McWatt, who commissioned Bristol-based street artist Xenz to create large wall paintings with a Chinese sensibility, also made sure the gods were pacified by employing a geomancer, as is routine in Hong Kong, to make sure sound feng-shui principles were followed. As a result of their advice, he installed two sculptural rocks in strategic places in the garden: ‘Luckily, we didn’t have to source those ourselves!’ says Tonkin.