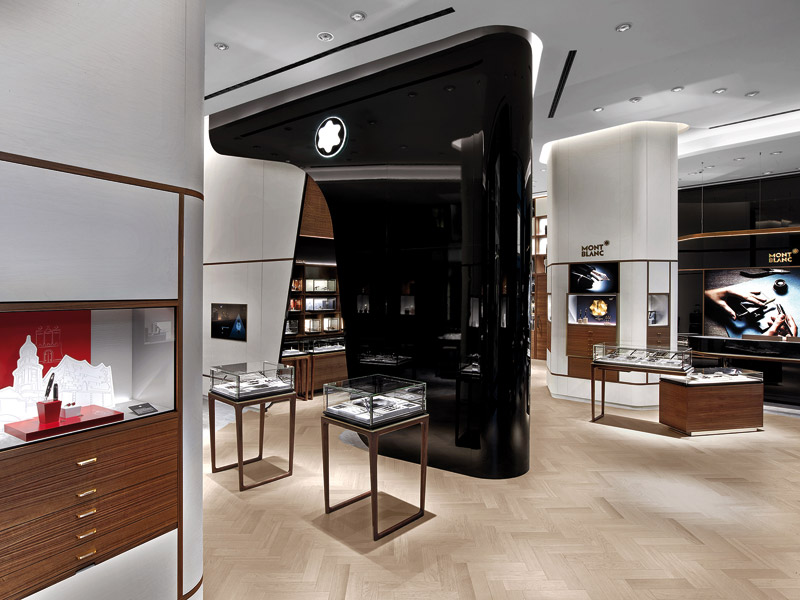 Luxury pen maker Montblanc has just opened its latest store, its European flagship, in Hamburg, the company’s hometown. Designer Noé Duchaufour-Lawrance had the task of translating the brand’s detailing and narrative into its latest retail environment, ready for a roll-out through its other stores. Johnny Tucker reports

There are 35 steps involved in just the making of the 14ct gold nib of a Montblanc pen - so how do you go about translating that kind of detail and narrative into a retail environment?

To begin with, designer Noé Duchaufour-Lawrance has opened with some broad brush strokes, or to be more precise some broad pen strokes. Sweeping black, high-gloss, lacquered panels - 'the gesture' - are a key delineating element of the brand's new, just-opened European flagship store in Hamburg.

A few may question why the flagship has opened in Hamburg, or even why Germany at all. Despite its French-sounding heritage, and Mont Blanc itself being in the Alps between France and Italy (Monte Bianco), the brand is actually German. What's more, Hamburg is the hometown, with the factory just outside this second-largest city in Germany.

Set up in 1906 as the Simplo Filler Pen company, the founders wanted to make the best pens they could. The Montblanc name came along three years later and the snow-cap logo was trademarked in 1913. The name was chosen to identify with Europe's highest peak. Since then Montblanc has grown into a worldwide brand, now owned by Richemont (which also owns Cartier) and has some 520 stores and franchises around the world.

Duchaufour-Lawrance, whose work ranges from retail to restaurant interiors, through furniture for brands such as Bernhardt and Tacchini, to one-offs such as a paper kimono for Procédés Chénel, has been working with Montblanc for three years. He has recently completed a number of high-profile Asian stores, refining the design for this European flagship launch that will become the global blueprint going forward. In all, he's created 10 stores including this flagship. The Hamburg store will be the blueprint for future retail. Courtesy: Montblanc

Since its inception, Montblanc has moved outwards from pens and now has nine distinct, but related, luxury product categories, which also have to come together in the retail environment, while maintaining their individuality. Continuing the broader pen strokes' analogy, the lacquer panels play off against white 'paper' walls.

Duchaufour-Lawrance has also introduced a smoky American walnut to soften the black and white palette and play on the luxury theme. With the bespoke furniture he has created, which has an assured lightness of touch, oozing quality, he has contrasted the wood with satin brass detailing for edging and drawer handles, while the surfaces are a charcoal-grey linoleum. 'I used the wood to help create a connection with home to promote the customer's personal relationship with the brand,' explains Duchaufour-Lawrance. 'The wood is also about the craftsmanship. It's a luxury wood without being too much. The brass is also a luxury reference without being too overt.'

So, essentially the retail concept is about the large, if subtle, brand statements, then the fine detail, plus the organisation of the product into very specific areas. The project has also been about distilling this environment, in order to turn it into that kit of parts that can be rolled out across a portfolio of retail environments that vary from the big-city stores, down to very tight footprints.

Retail merchandising rules have been developed, such as you must enter through watches, and leather goods must always be visible from the entrance or through a window. It's all made for an extremely complicated product grid (on retail footprints that generally aren't very large), that also of course has to take in such factors as how you go about segregating types of customer - a comfortable distance between those coming in for a £10 pen refill and others looking to browse at watches, which start at around a grand and shoot up to some eye-wateringly expensive models. There's also the psychology of elements, such as stool versus seat. A long, expensive purchase requires a relaxing comfortable seat, yet apparently people who haven't committed feel more comfortable on a stool -- less pressurised. In the next couple of months, Duchaufour-Lawrance will be handing over the design guidelines and his legacy for the roll-out, that will be applied at a rate of around 60 stores a year. He explains the essence of what he has done: 'I wanted to talk about the ink and the handwriting and the snowcap - which is such a strong symbol. That's why I wanted to create "the gesture" in the environment. The essentials are that we always need "the gesture" and a balance between the white and black, because I don't want to have black stores. The balance is due to the categories normally: for instance in watches we have the black resin, with leather goods it's white and wood. We usually try to open the stores with the black gesture on the left with that finishing just behind the counter.

The ink appears on a screen at the entrance, which is the first time Montblanc has done something like this without it having an advertisement on it.'

In conclusion, the new concept is described by Montblanc thus: 'The luxury Maison expresses its core values in a new immersive retail experience emphasising fine European craftsmanship, a heritage of sophistication and the pursuit of innovation.' All good so far; it's just what it's being called that's a little bit worrying: The Maison Of Fine Lifetime Companions. Is it just me, or does that not sound a lot like an upmarket dating agency?