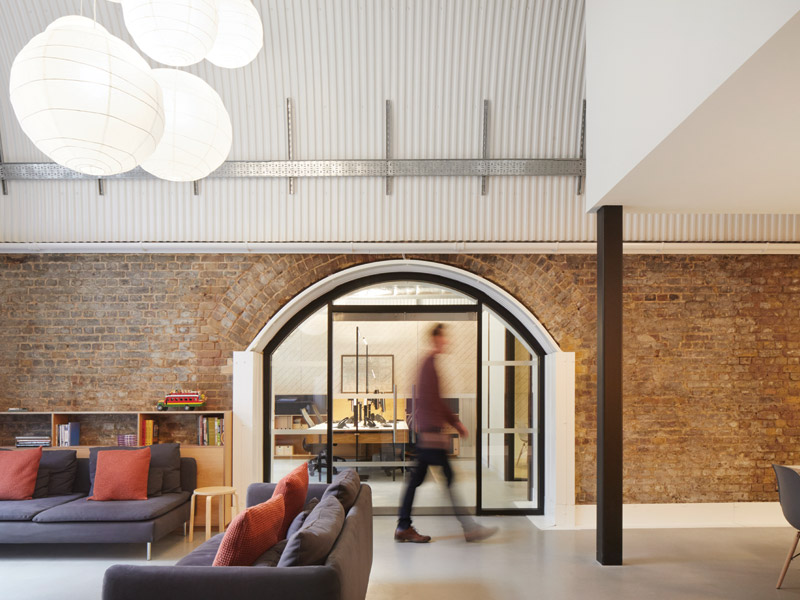 Designed by ID:SR Sheppard Robson, the artisanal coffee makers’ new company offices are located in a series of railway arches

Monmouth Coffee, founded by Anita le Roy in 1978, was one of the first of the artisanal coffee makers to bring sustainable and high quality coffee to London. Forty years later, there is still a near-constant queue at its London locations, and even with 63 employees they work ‘like a family’, says ID:SR Monmouth project manager Flynn Hall. The faith in their craft shapes how they run the business. While the top-spec machines roast to exact temperatures, they still prefer to trust their experience: their roasters' knowledge and skill, and their tasters’ impeccable judgment. The bespoke desks were made by Uncommon Projects

Likewise, being used to designing all its own shops and spaces, Monmouth was certain of what it wanted for this new office space. While Monmouth did design and fit-out the technical areas – roasting, packing and tasting spaces – the office was a little out of its comfort zone and so it turned to ID:SR, the interior design group for architects Sheppard Robson. Le Roy and her team remained closely involved, and over a long period, client and designer held regular meetings – often over homemade cakes. The experience was equally unfamiliar for both parties: compared to Monmouth’s hands-on approach, ID:SR more frequently design offices for the likes of KPMG, where the client leaves them to design everything down to the last detail. ID:SR and Monmouth collaborated on the offfice and meeting room spaces

The space spans seven railway arches of Spa Terminus in Bermondsey, the original terminus of London’s first railway. The nature of businesses that use the historically cheap railway arches has changed, and will no doubt continue to do so following the sale of Network Rail’s arches in 2018. In many such locations, out have gone the car repairers and metalworkers; in this case it was a tannery that used to occupy the arches. While some more ‘premium’ locations now house offices for larger companies, at Spa Terminus, Monmouth is part of a community of likeminded small businesses. The company is used to working in railway arches, and despite the challenges of these spaces such as noise or damp, it was keen to maintain a sense of where it was, preserving the standard, white plastic Network Rail cladding, the narrow tunnel layout and the high arches. The workflow the space demands has become quite entrenched: ‘We get a lot from the space, and we appreciate that, and work with that’, says Monmouth’s Hall. The larger double-width arches provide the entrance and roasting areas, and are more industrial in scale than the smaller arches used for the offices. But even the smaller spaces have a height of 5.8m, which prompted ID:SR to design a 2.8m-high frame to introduce an office-friendly scale. The minimal frame also efficiently provided structure for the office layout while maintaining an open plan, demarcating how the workforce is split into three sections – wholesale, buying of raw green coffee, and accounts – without creating divides. The space spans a total of seven railway arches in Bermondsey

In the long, narrow tunnels, maximising the amount of natural light was a challenge. With the only openings to outside being at each end, it was important to maintain lines of light and vision from one side to the other; however, to create more substantial enclosed spaces, such as a large meeting room, this would naturally take the majority of the tunnel’s width, leaving only a narrow corridor down the side. The designers successfully prevented these walls obstructing the flow through the tunnel with a small glass return. Elsewhere, artificial lighting is worked discreetly into the space with the majority of ambient light coming from uplighters on top of the frame, making the most of the light reflecting off the white-clad high arches. In the main office space each desk has its own adjustable light. Heating is provided underfloor, installed below new polished concrete that hides the solid, yet patched, concrete flooring previously laid by Network Rail. The final colour palette came about through extensive conversations between Monmouth and ID:SR, and was eventually inspired by the new Bakerloo Line trains that caught le Roy’s eye at the time. Instead of the salvaged office furniture Monmouth was considering, bespoke cabinets and desks by Uncommon Projects were used. In its signature birch plywood, the clean joinery with fine details adds refinement to the space while providing considered and work-friendly furniture. In breakout spaces the designers left the options more open to the client, suggesting low-cost Ikea furniture that would work well within the scheme. The kitchen and lounge seating was chosen from Ikea, whereas other items – the meeting room chairs, for example – were le Roy’s own.

In its ‘concept and intent’ role, ID:SR did not prescribe all aspects of the design, but was responsible for a number of invaluable interventions and decisions. Both parties – client and designer – respected the experience of the other, taking time to pause, reflect and work out the best route forward. Meeting the client again almost two years after completion, project architect Danielle Marshall was happy to see and hear how Monmouth has been working with the space.