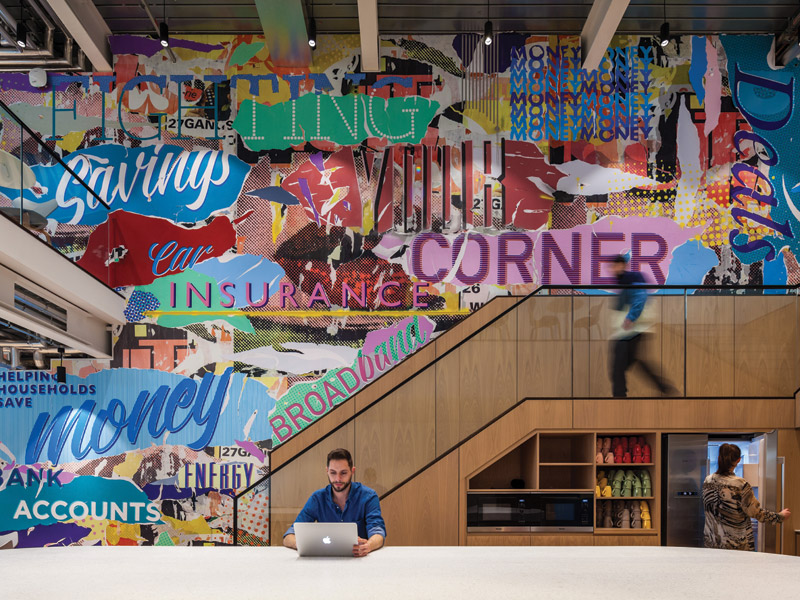 Realising that its old offices did not reflect the ambitions and ethos of a modern tech firm, MoneySuperMarket Group decided to move, taking three identical floors at 1 Dean Street, London, a new building by Great Portland Estates. It was a move just ‘two minutes down the road’ from its previous office, but it is, as Adam Childs, senior associate and creative director of architects BDG, put it: ‘small distance, big difference’.

The Cat A space was light and bright – a blank canvas without pre-existing features around which to shape the design. Onto this, BDG was tasked with creating a design language that represented the brands of the MoneySuperMarket Group: MoneySavingExpert, MoneySuperMarket.com and TravelSuperMarket. There’s a uniform appearance across the floors. Credit: Jefferson Smith

The three floors could easily separate and be individualised for each of the different brands, but in trying to move away from a siloed work culture the priority was instead to blend brands and services, to encourage internal collaboration with a shared sense of purpose.

BDG decided to move away from surface-level branding – such as colouring the space in the brand colours as the client had done previously – and looked to evaluate their shared ‘DNA’ instead. BDG boiled this down to four keywords: ‘honest, simple, down-to-earth and upbeat’. This is generally reflected in the materials, choosing wood for both the kitchen fit-out and staircase, although a hero piece of the project is a large commissioned artwork by Acrylicize that spreads across the central space of the three floors. The brightly coloured design – a composite collage of roughly layered slogans drawn from each of the brands – resembles a billboard’s history of layered ads, ripped and exposed. Though perhaps surprisingly lo-fi for a tech company, as Childs points out, this is a nice metaphor for a central element of the business: persuading customers to decide how best to spend their money when faced with everything the market has to offer. The eye-catching wall art follows the staircase that cuts through the centre of the floorplates to join the three floors. It does a lot of the work to connect people and spaces, and from this central area the openings into designated office space offer a view to the outside windows.

To integrate the different brands 40% of space was designated as entirely communal.

The tea points are large and are situated centrally rather than being scattered across the office, forming the ‘heart’ around the staircase, towards which employees might be tempted from their usual desks. You might find people from all brands and all floors mixing here, on a daily basis over the free breakfast spread or at one of the frequent internal parties, as having space to celebrate together was one of the client’s key demands. The communal space also consists of plenty of flexible working areas: to complement the 250 permanent desks there are as many as 174 alternative workspaces – ‘high, low, mobile, lounge, in between’, says Childs. There are also meeting rooms on each floor, where it was important to have the same-quality facilities, such as two-way conference calling, available for all employees. The interiors are kept neutral in regards to the different brands and the rooms, named after famous tech entrepreneurs such as Steve Jobs, are defined only by that name. One further touch installed latterly by the client is a ‘wellness room’, providing private space for anyone who might need it.

Sometimes what clients ask designers for turns out not to be what they need, but over a year after moving in all evidence points to the space being well-used. Childs says the question always is: ‘When they get it, do they use it the way they were going to?’ He adds that ‘these guys absolutely do’. For this project, the client was constructively involved from the start. BDG held workshops with a cross section of employees; made a shortlist, then a final selection; and finally installed a mock-up of the new set-up within the existing office so staff could try out the chosen furniture. BDG is keen to do this whenever there is the sufficient time and opportunity, as a way of increasing client involvement and satisfaction. …while there are 250 permanent desks. Credit: Nikhilesh Haval

While the furniture chosen includes a large number of different styles – perhaps as a result of the open design process – one thing that is striking about the project is that there are few hyped features or gimmicks. Childs says there was a real sense of the client applying the skills for which it is known to the project: every decision was carefully weighed up to see if it would add real value. This allowed MoneySuperMarket Group to take on some of the higher-cost aspects, such as the staircase, which was deemed a particularly valuable intervention. Relative values were considered, and the space needed to be inspirational enough to retain talent, as it was competing with other modern and dynamic tech companies.

Why Childs thought the project was interesting in the first place is reflected in both the process and the results BDG has been able to achieve. As he says: ‘This is a very dynamic modern tech firm, [with] a very human workforce.’