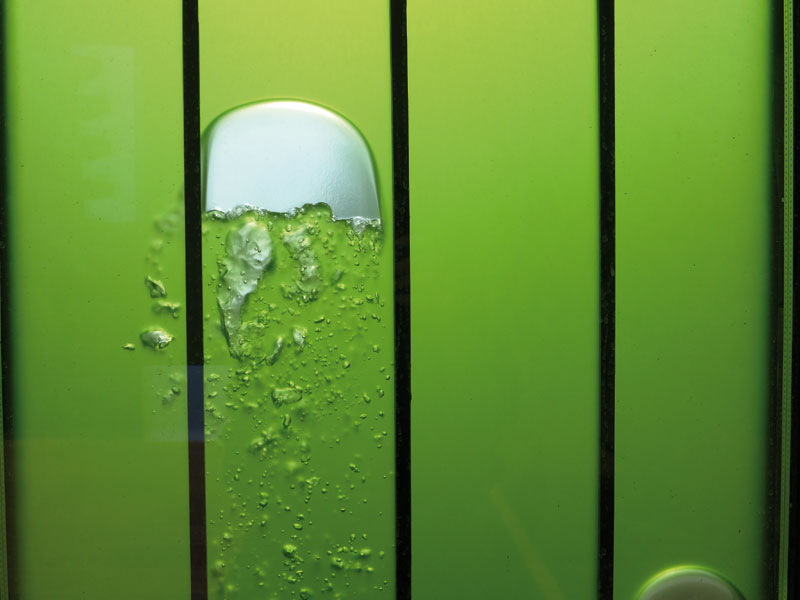 Pond slime may get bad press from gardeners and aquarium owners, but in recent years it has become something of a miracle cure, with researchers studying its potential for everything from biofuels and carbon scrubbers to superfood. What it is very good at is producing literally green energy through the simple principle of photosynthesis.

Microalgae are tiny single-cell proto-plants, most no larger than bacteria. Despite accounting for less than one per cent of the Earth's total biomass, they drive the biological pump that maintains our atmosphere and its balance of carboniferous matter. Until relatively recently, the energy-dense and nutrient-rich material left behind by these micro-organisms has been an almost entirely untapped renewable resource.

As anyone who was paying attention in their biology lessons will know, photosynthesis is the process used by plants and other organisms to convert light energy, normally from the sun, into chemical energy. This can be stored in carbohydrate molecules, such as sugars, synthesised from carbon dioxide and water, and later released to fuel the activities of the organisms. In most cases oxygen is released as a waste product.

In effect microalgae operate like miniature power plants. They absorb large amounts of the greenhouse gas CO2 and transform it into oxygen. Some species can even produce hydrogen. One of the advantages of using microalgae in particular is that their simple, unicellular structure enables the rapid production of biomass. Sketches for Solarleaf (in action right), an installation for the International Building Exhibition, 2013

In larger plants not all cells contribute to photosynthesis, but because microalgae have a single-cell structure they put all their effort into the process of converting light into chemical energy. This means they grow around 10 times faster than larger plants.

In a lighting context, researchers are looking at several applications. French biochemist Pierre Calleja, for example, who set up the industrial biotechnology company Fermentalg in 2009, has been investigating the possibilities for street lighting that also acts as a carbon scrubber. The prototype microalgae lamp that he devised some six years ago provides both its own electricity and purifies the air of CO2 (an estimated tonne per lamp per year). Tubes of water with pale green microalgae absorb light through the day, and then emit it after dark. The process again involves photosynthesis with the microalgae acting as solar cells to charge the lamp's battery, while simultaneously absorbing CO2.

The problem is producing meaningful amounts of electricity. The tiny amounts generated by the prototype process means that you would need a trillion cells photosynthesising for one hour just to equal the amount of energy stored in an AA battery.

Elsewhere Arup has collaborated on a bioreactor facade for an experimental building in Germany, winning the Applied Innovations category of the Zumtobel Group Award 2014, organised by the architectural lighting multinational and presented in January this year. Here the microalgae are used to generate energy for the building, including its lighting, as well as acting as a sunlight control. From the Living Things installation, in Pittsburgh until next March

Opportunities to see microalgae in action are rare but if you just happen to be in Pittsburgh, a science-meets-art installation called Living Things offers a glimpse into a possible near future.

Solarleaf
Early this year the SolarLeaf bioreactor facade system, won a Zumtobel Group Award. 'In the future we need to develop buildings that don't just offer shelter and minimise energy consumption but also try to deliver answers to how we provide the urban environment with energy, water and better air quality,' said the judges. 'The SolarLeaf facade is an outstanding example...in that it generates energy without taking up additional space. This project is especially valuable because for the first time we have an application that actually works in an existing building.' From the Living Things installation, in Pittsburgh until next March

Microalgae are cultivated in the glass elements that make up the building's bio skin - clusters of three to five transparent glass containers, each 2.5m tall and 0.7m wide, known as flat-panel photobioreactors (PBRs). These contain water and nutrients, and are used to produce heat and light, as well as control light, provide shade and absorb CO2 emissions. The sides of the building that face the sun have a second outer shell set into the facade itself, in which the microalgae are produced. With the aid of sunlight, the algae can photosynthesise and grow.

Living Things
Living Things is an installation at the Mattress Factory at the Museum of Contemporary Art, in Pittsburgh, Pennsylvania. Conceived by Ethan Frier and Jacob Douenias, it shows the integration of microalgae into a potential future domestic environment.

It comprises three vignettes - a living room, a dining room and a kitchen/control centre - each with a different character, and where the living vessels have a different function according to the space. Hand-blown glass vessels function both as lighting and heating elements for the human occupants, while high-functioning photobioreactors provide light, heat, agitation, air supply, and nutrient and waste control to the living algae inside. This life-support system is connected through 1km or so of wiring and plumbing to a hybrid between a scientific workstation and a media cabinet.

Here each of the nine vessels' life-support systems can be adjusted individually. The 3D-printed nylon knobs embedded in the surface of this workstation control 18 valves that allow for the harvesting of the microalgae, spirulina, when the culture becomes dense enough, as well as the supply of fresh liquid media to each vessel. The cabinet also houses the pumps, tubing, manifolds, LED drivers, air pumps, heater connections and filters that comprise the heart of the life-support system.

Spirulina was chosen for the installation because of its ability to thrive in very alkaline water, where most bacteria cannot live.

As the algae grow very quickly, the character of each vessel changes continuously. The liquid becomes a deeper rich green, and absorbs more and more light from the internally lit vessels. Individual spirulina filaments, barely visible to the naked eye (a third of a millimetre long), can be seen mixing inside the glass vessels. Once filtered, the algae can be used as a foodstuff.

It is dried from a viscous paste into a fine, green powder, which is more than 60 per cent protein by weight. Apparently it's mostly flavourless with a hint of grassiness.