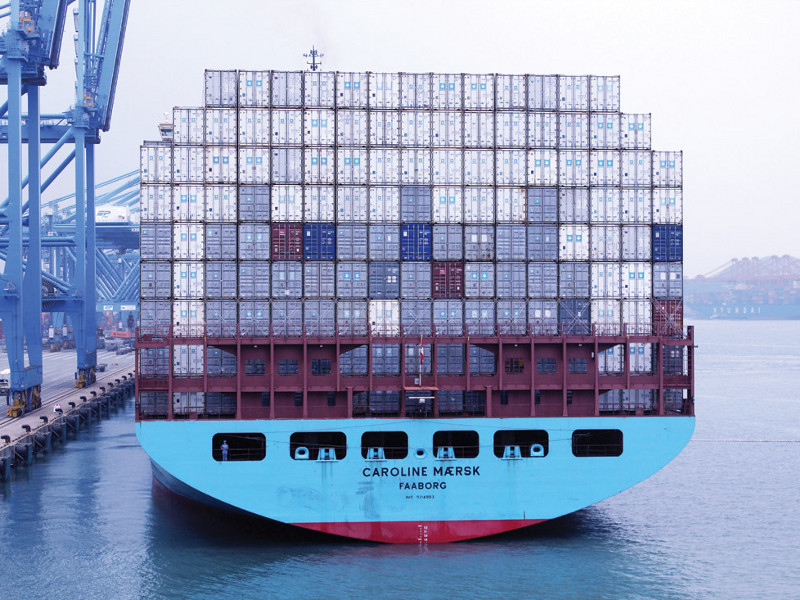 Matthew Ponsford sits down with Unknown Fields, whose research-led work interrogates the global networks and impacts of consumption

Some of the most remarkable stories you’ll hear from Kate Davies and Liam Young, the duo who lead the globe-trotting ‘nomadic’ design studio Unknown Fields, unravel in the in-between places that remain hidden to most of us. Like the one about the ageing sea captain and aurora emanating from the ship’s toilet.

Aboard a Maersk cargo ship from Korea to China, while filming for their 2014 research project China: A World Adrift — which involved travelling the South China Sea to explore the cargo routes and supply chains that feed our cities — the captain informed Davies and Young it would be his final journey before retirement. ‘He told the story of when he first started out, the ocean used to be full of life and you would see whales and dolphins following the boat along,’ says Young, the Australian designer and filmmaker. ‘Back then, the sea was so thick with phosphorescent algae that the ships would leave these glowing trails behind them, when they moved through warm waters.’

Most surprising was the effect this left in the ship’s bathrooms: ‘When you would go at night to the loo, you wouldn’t need to turn the lights on,’ he explains. ‘You would just flush the toilet and the agitation of the water would make the phosphorescent algae glow green and the entire bathroom would be illuminated.’ Unknown Fields aims to reveal the physical landscapes — in all their wonder and ruin — that lie behind the complex networks and everyday products we rely on each day. Through films, writing and speculative design, the studio reconnects the cities that the majority of the world calls home with the planetary-scale infrastructure of production and consumption that essentially serves as ‘a grand highway to deliver our goods to us’, says Young, and ‘is engineered purely in terms of production efficiency, profit and exploitation.’

The studio’s 2015 film The Breast Milk of the Volcano, currently on display as part of the Royal Academy’s Eco-Visionaries exhibition (until 23 February), takes audiences to the origin of the lithium resource that fuels our laptops and smartphones, in Bolivia’s Salar de Uyuni, the world’s largest salt flat. In the ‘green revolution’ to come, lithium will usurp oil as the lifeblood of global transport infrastructure, as electric cars and buses become the norm. Yet, few of us can call to mind the physical substance that will make this possible, says Davies, an artist and architect who teaches at The Bartlett as well as the Architectural Association (AA), where she and Young met in 2007 before starting Unknown Fields in 2008.

In The Breast Milk of the Volcano, vivid images of desert sky and the azure holding pools of lithium brine is soundtracked by droning notes, somewhere between pan pipes, analogue synthesisers and throat singing — as a voice-over traces the chemical, geological, cultural, and mythological connotations of this volatile element. Its title refers to the myth of the indigenous Aymara people, that these vast salt flats were produced from tear ducts and breasts of a jilted mountain goddess.

At the Royal Academy, a rudimentary, volcano-shaped lithium battery, sits beside the film, charging a mobile phone. This is one of a number of physical interventions they have made into the supply chains they document. Perhaps best known of these provocative objects is a collection called Rare Earthenware, which resulted from China: A World Adrift and went on display at the V&A Museum in 2015. It was composed of a set of three vases sculpted from the radioactive ‘tailings’ that are the by-products of the manufacture of a smartphone, a featherweight laptop and the cell of a smart car battery.

Spotlighting the ‘geological shadows’ of our consumer desires — as Young labels the vases — is a step towards the pair’s ultimate goal: an industry where product design and the landscape-shaping by-effects of the product’s creation are seen as one and the same. ‘What would it mean to make a decision about the iPhone 13, which isn’t based on how it fits in our hand, but how it actually sets in motion and creates a landscape across the other side of the world?’ asks Young. In addition to a new four-screen display of their project Unravelled, a film following the supply chain of a $3 T-shirt from cotton field to store, Davies and Young tease a new project, Glass Earth. The gold mines of Australia’s interior are currently being laser-scanned for hidden signs of mineral wealth, explains Davies. Backed by a grant from National Geographic, Unknown Fields will produce a film and a VR experience, making use of these new scanning technologies. As a counterpoint to the purely financialised landscape seen by mining firms, a series of paintings have also been commissioned from Aboriginal artists.

After expeditions to the Galapagos Islands, Chernobyl and the gemfields of Madagascar, Unknown Fields has taken ‘bus-loads’ of AA students to remote nodes of the global architecture of production. And while its teaching studio ended after almost a decade, the pair continue to advocate for other designers and architects to take a less static approach. ‘Cities no longer exist as single points on a map,’ justifies Young. ‘You can’t understand London without thinking about all the complex webs and networks that it is a part of. So any designer that’s truly wanting to engage with London as a condition needs to get on a cargo ship, or jump on a plane or somehow unravel and follow all of the networks.’