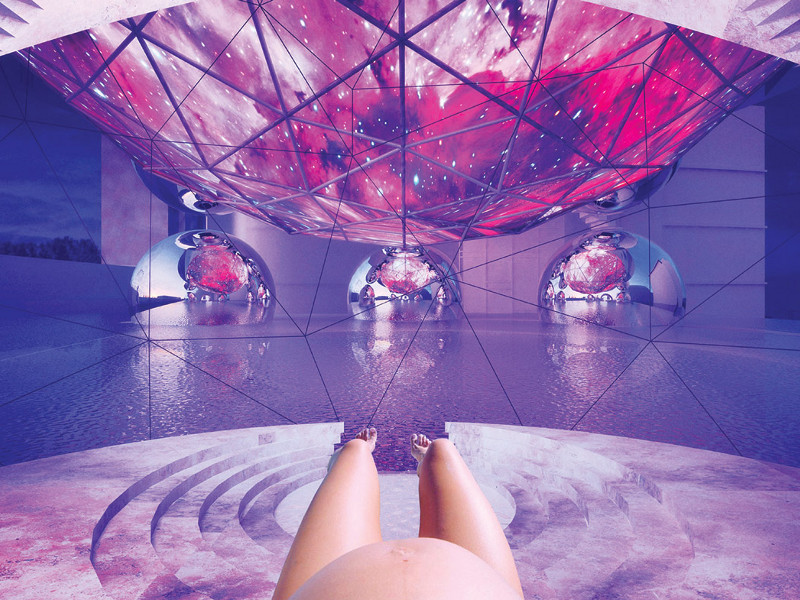 We sit down with this year’s cohort of the Design Museum’s Designers in Residence, responding to the theme ‘cosmic’

Each year, the Design Museum in London hosts a residency for four emerging designers to explore and evolve their practice, centred around a specific theme. Now in its 12th year and with its own dedicated studio space in the museum, the Designers in Residence programme has welcomed a cohort of diverse designers to interpret the theme ‘cosmic’. WIth links to the museum’s blockbuster show, Moving to Mars, the theme has invited an array of interpretations. We meet the four designers in residence and find out what cosmic means to them. The inspiration behind Minkovska’s project was the birth of her daughter (which, incidentally, she recorded with a GoPro strapped to her head). ‘Birthing environments are very dated,’ she explains. ‘The design elements haven’t changed since the 1950s, and they are largely male-designed. They need reimagining and redesigning.’ Minkovska’s experience led to her desire to design a more therapeutic, wellbeing-centred birthing environment. ‘As it stands, the woman is treated like a factory. She is not in control of her body or her wellbeing. She is told what to do in a high-tech, clinical environment — for one of the most intimate and profound moments of her life.’

The birth of her daughter, Minkovska explains, was ‘a very cosmic experience. I had to escape from the pain, the medical environment, the surveillance; space was the best thing for imagining this escape.’ This translated into Minkovska’s idea to create a ‘cosmic environment for mothers’, seeing birth and the universe as inherently connected. The project began during her Masters in Architecture at the Royal College of Art, in which she proposed a non-medical, planetarium-like birthing centre, inspired by Maggie’s Centres.

Developing the idea during the Design Museum residency, however, has seen her focus more on the design of specific furniture elements for the experience of childbirth. This includes the Labour Chair, for contractions, the Parturition Stool, for companions and partners to support the mother through the experience, and the Recovery Chaise, for a mother to connect with her baby after birth, or recover from a traumatic experience. Minkovska’s priority is to make the environment as inclusive as possible, creating a ‘cosmic, sanctuary, therapeutic, womb-like’ space through lighting and materiality. She is also working with sound designer Laura Selby on a ‘cosmic birth’ soundscape.

For the project she is consulting a midwife at the Chelsea and Westminster Hospital, alongside its charity CW+, and hopes to speak to mother and baby groups. In terms of production she is working with material supplier 3form, lighting manufacturer LED Flex and flooring company Tarkett. Giralt and her work in progress. Image credit: Felix Speller for the Design Museum

‘There’s a mysticism around nanotechnology because it’s invisible,’ says Giralt. ‘There are a lot of negative stories and fears about its potential. I wanted to understand what it means for designers and how they can use it.’ Giralt, who completed a Material Futures MA at Central Saint Martins, hopes to use this residency as an opportunity to connect the scientific community with designers and the public.

Her project focuses on graphene, a nanomaterial that was discovered in the UK and is considered the thinnest, strongest and most conductive material in the world, leading to its use in the fields of electricity, conductivity, energy generation, and nanotechnology. Despite its great promise, Giralt believes there is one key problem with graphene. ‘It’s a non-democratic material,’ she says. ‘It is hard for people and designers to access without the expertise of a scientific lab. Collaborations between scientists and designers are only just starting now.’ She is running a workshop to connect scientists to members of the public to explore the material, and the aspirations and concerns around it. Giralt is also interested in graphene’s potential in advancing material sustainability; she is conducting research with mycelium, feeding it with graphene to grow new composites. Giralt and her work in progress. Image credit: Felix Speller for the Design Museum

So why cosmic? ‘The universe is a structured system,’ she says. ‘I’m interested in how nanotechnology alters systems on a minuscule scale, looking at this invisible world of atoms and molecules in a cosmic way. The forces at play are similar to how the planets work. By altering the structured system of these hidden universes, we are also changing the world that surrounds us in unpredictable ways.’ What’s more, one of the key industries nanotechnology will impact, is space travel. Johnson in the studio with samples of fats he has collected. Image credit: Felix Speller for the Design Museum

Johnson is fat-obsessed. That is to say, his work is exhaustively exploring the role, potential and processing of fat as a material. ‘I’m looking at how we could redesign the system of fat and fat waste,’ says Johnson, whose masters degree at the Design Academy Eindhoven was in Social Design. He is interested in how materials and material processing systems can create new microcultures and economies, including whole new sources of employment.

The focus on fat, he explains, is because it is ‘an innate survival mechanism’. Both biologically and culturally, fat has been harnessed throughout history as a survival tool. ‘Its properties lend it to being a material for protection,’ Johnson says. ‘The rhetoric surrounding fat is negative, but it is a material of progression and survival. How can we reinvigorate that meaning?’ If humans are considering, as the museum’s major exhibition outlines, moving to Mars, then survival will be at the forefront. Johnson is intrigued as to how fat waste processing can be rethought for collective physical and financial survival. Johnson’s project comprises three lines of exploration. The first is designing new devices for the collection of waste oils in restaurants. Most such establishments have a grease trap; Johnson is investigating new ways of designing this for easy, user-friendly collection. The second strand is looking at what can be made of fat waste in terms of new materials, such as insulation for bricklayers. The third is interrogating the potential of this system to create new labours and economies.

Working with five restaurants across London, all of which produce different cuisines and thus different fat waste, Johnson is collecting samples of fat to work with. He wants to showcase these samples to demonstrate what the material can do, but also what the system can offer. He is also working on a fat map and a film, and collaborating with London-based natural materials development company Materiom. ‘Through the material representation of fat waste,’ he asks, ‘can we reshape the cultural identity of fat?’ With a background in both architecture and information experience design, Forés’ work primarily explores surface design and its experiential impact. For her residency, she is inspired by one particular surface, almost extraterrestrial in aesthetic: that of the Atacama Desert in her native Chile. ‘It’s a very extreme spatial landscape experience,’ she says. One of the driest environments in the world, the desert has inspired Forés as the ideal place to explore issues of global environmental and humanitarian relevance, through one specific mineral: salt.

The Atacama Desert has faced myriad problems as a result of mineral extraction, specifically lithium and nitrate mining, creating discarded salts; it is also one of the best places in the world for studying geological history, as well as the cosmos. ‘Looking at minerals is looking at the history of the universe,’ says Forés. ‘Minerals have been shaping our world since the Big Bang. Mineral studies are also vital for exploring life on other planets.’ For Forés, the Atacama is a localised case study that tells much broader, global narratives: ‘The history of this territory represents problems that we’re all facing,’ she says. ‘It is important to bring these local narratives and show how they’re linked to global ones.’ Salt, equally, is one specific example representing a world of material and mineral issues: ‘I’m working with salt because it’s a material that everyone can relate to, but it is also geologically rich in importance; it is a narrative thread to connect global, local and material contexts.’ Forés travelled to the desert to conduct research, including interviews with local people and collaboration with geologists. Her project is also about material experimentation: exploring the ways in which we can rethink these salts. She is mixing salts with various minerals to show how they can grow and mutate. ‘Salt is an easy medium to show how these minerals can transform themselves — and us,’ she says. She hopes to cast tiles that present new ways of understanding materials, their source and cultural value — and is consulting with Dzek, a London-based architectural materials studio. Forés hopes to translate her experiments and research into an immersive installation for the residency’s exhibition opening in early 2020, in which materials and surfaces ‘are turned into a performative device’.

This article was originally published in Blueprint issue 367. You can buy a copy online here, or subscribe to Blueprint