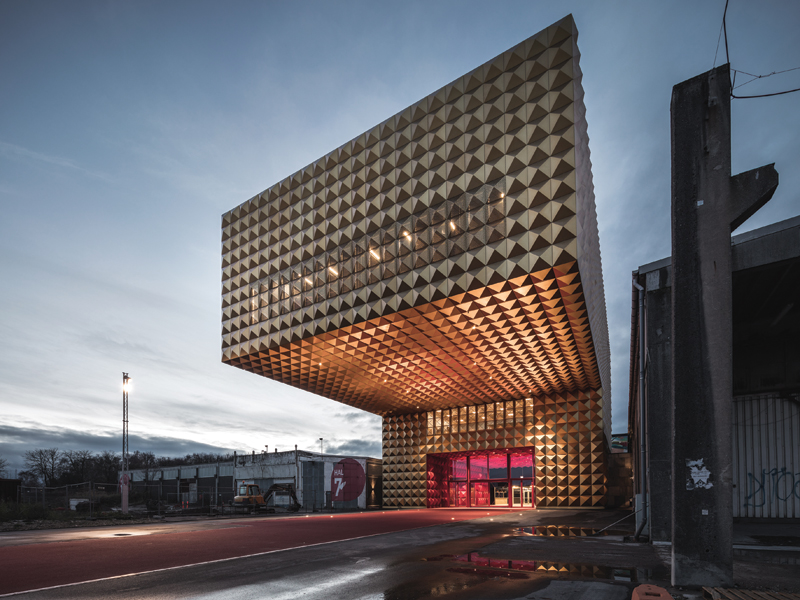 Danish practice COBE Architects is busy reimagining the petrol station of the future as a social, healthy hub for people and electric vehicles

Who: COBE Architects
What: Architecture practice
Where: Copenhagen, Denmark

For a young practice that started a little more than a decade ago, things have gathered pace quickly for Copenhagen-based COBE Architects. Numbering over 100 employees, it has picked up a whole range of contextual urban projects from kindergartens, housing and museums to large infrastructural schemes, EV charging stations and vast transportation hubs.

Founder Dan Stubbergaard puts success down to a cocktail of luck, coincidence and good timing. Having previously worked with Bjarke Ingels and Julian De Smedt at architecture firm PLOT, in 2005 he took a break and began to enter competitions with two close friends, penning the name COBE to unite their two home cities, Copenhagen and Berlin. ‘It was not about starting an office, but that name has been following me ever since,’ says Stubbergaard. ‘It was the right time and the right place, the economy in Denmark was booming and there were projects available to young offices, which gave us some great opportunities in Copenhagen.’ COBE is reimagining the petrol station of the future as a greener, calmer, friendlier alternative for electric vheicles. Image Credit: COBE

The three went their separate ways in the end but since then, COBE Architects has been using the Danish capital as a test ground to develop its sensitive, site-specific approach to urban spaces — ‘a 1:1 laboratory for doing architecture in public spaces, urban planning and building in a way to improve the livability in the city of Copenhagen,’ explains Stubbergaard — that puts its users and their wellbeing at the heart. More recently the practice has been taking those lessons learned further afield, with projects emerging in Germany, France, USA and Canada.

The first project to put COBE Architects on the map, though, came in 2008 with a competition for Copenhagen’s Nørreport Station (completed 2015), the busiest station in Denmark with 250,000 people passing through it every day. By mapping and analysing the flow of pedestrians and cyclists, COBE was able to create a welcoming, new public space defined by a series of sculptural, floating roofs sitting atop a group of glass pavilions. ‘In general, planning our cities has been very much ruled by infrastructure; people perceive it as something noisy, bad, polluting. Our vision is to always say that you can combine infrastructure with other possibilities; that’s something we’ve been working on in the office, how to actually create quality and a human scale,’ says Stubbergaard. ‘With Nørreport Station, we drew our project with the movement of people and that guided the design.’

Later came Israel Plads (2014), a Copenhagen plaza conceived as an ‘urban carpet’ that conceals a subterranean space for cars; Ragnarock (2016), a museum for pop, rock and youth culture in Roskilde, created with MVRDV and clad in golden studs; and The Silo (2017), a 17-storey apartment block in Copenhagen with faceted, galvanised steel balconies. Now COBE Architects is developing projects on a much larger scale, starting by reimagining the petrol station of the future as a greener, calmer, friendlier alternative for electric vehicles (EVs). Created in collaboration with Danish automotive tech company CLEVER and being rolled out across Scandinavia over the next two years, with the first to complete in Denmark by mid-2018, Ultra-fast Charging Stations are designed as a series of modular, wooden, tree-like structures that can be reconfigured and grouped together in multiple settings to form protective canopies for drivers needing to charge their EVs. There will be planting, contemplative places to sit and even exercise equipment too. ‘We wanted to reformulate the fuel station completely so it’s not only about recharging your car, but recharging yourself,’ says Stubbergaard. ‘We had a very meditative approach to it.’

Elsewhere, the practice is designing a transportation centre in the Finnish city of Tampere that will attempt to unite two disconnected neighbourhoods by building a new urban space and public plaza over the railway tracks. A new mobility hub to the south of Copenhagen, Køge North Station (due mid-2019), similarly connects a new train station with a park-and-ride facility and a busy motorway by building a 225m-long raised pedestrian bridge over the top, wrapped inside with warm, wooden lamellae. ‘The bridge forms the backbone of the whole station; it’s a bench where people can wait for trains or even a small urban living room where you can exchange experiences of different ways of commuting. That’s again about finding the soft spot… creating a human touch or gesture for something that’s a piece of very hard-core infrastructure,’ says Stubbergaard. COBE also has two ambitious masterplan projects for two of Copenhagen’s urban islands. Kronløb Island will be an entirely new island in the Nordhavn district, comprising an underwater car park, three new bridges and a monolithic housing volume inspired by Denmark’s geological landscape. Paper Island, otherwise known as Christiansholm, is a 45,000 sq m artificial site in the heart of the city that will become home to a series of new pitched-roof halls with lofty spaces for events, art galleries and a swimming pool.

The practice is in the process of moving out of its studio space on the island, where it has seen former warehouses taken over with meanwhile uses, street food markets and pop-ups. ‘This user involvement, testing things for a time to see what works and what doesn’t work, has helped us to really formulate what is the right thing to do when we start building a new project in the city,’ muses Stubbergaard. ‘We’re moving into our own neighbourhood that we masterplanned in Nordhavn. We’re going to try taking our own medicine, so to speak — we will be next to our own public spaces and buildings, and that’s very exciting.’