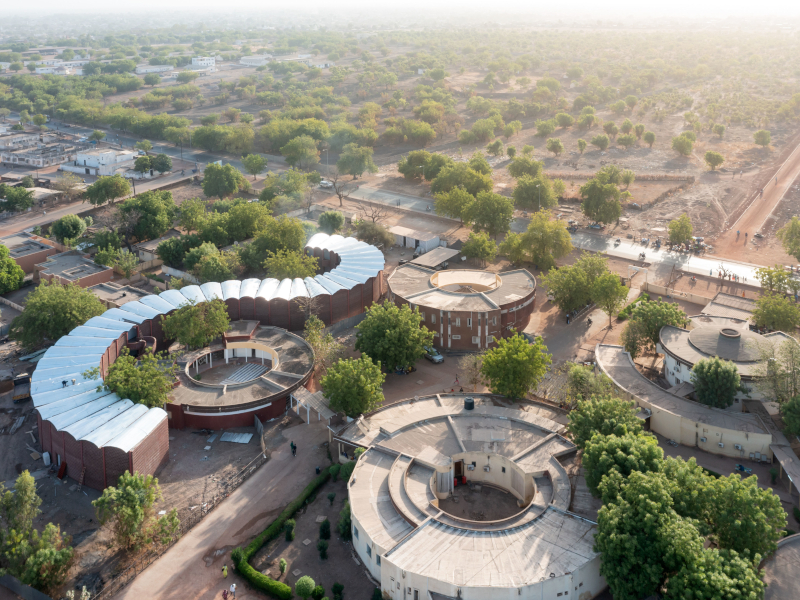 The Tambacounda Hospital is the only major hospital in rural eastern Senegal, treating around 20,000 patients a year from the area and across the border in Mali, Gambia and Guinea. Thanks to a project from the Josef and Anni Albers Foundation and Le Korsa, the hospital now has a new maternity and paediatric department building, designed pro bono by German-born architect Manuel Herz.

Herz was recruited following a competition run by the Albers Foundation and Le Korsa, organisations which have been working in Senegal for 15 years. The foundation was set up by the artists Josef and Anni Albers in 1971 to further ‘the revelation and evocation of vision through art’; to the present day, under the leadership of Nicholas Fox Weber since 1979, it has worked to promote the Albers’ legacy, as well as the aesthetic and philosophical principles by which they lived. Fox Weber is also the founder and president of Le Korsa, founded in 2005 to focus on working with rural Senegalese communities, providing support across culture, education and healthcare.

Previous projects between the two organisations include Thread, a cultural centre located in the rural village of Sinthian, and an elementary school in the village of Fass, both designed by Toshiko Mori. These projects, while carrying the ethos of the foundation, also make subtle references to Josef and Anni Albers’ practices: with woven roofs, geometric patterns on walls and doors – at Tambacounda, the doors within the hospital are inspired by a weaving study of Anni’s.

The existing provisions for the maternity and paediatric department were inadequate, as Fox Weber explains, ‘We at Le Korsa felt that it was unconscionable, and unnecessary, for three premature babies to be put on a small surface less than a metre square with a light bulb hanging over them, instead of in a proper incubator. Dilapidated structures, inadequate plumbing and a grim atmosphere: surely it was possible to do better.’

Herz has designed a two-storey, S-shaped building that brings the two clinics under one roof, providing approximately 150 hospital beds. The ground floor contains the main parts of the maternity ward and operations unit, while the upper floor provides more patient rooms as well as the paediatric clinic. Located adjacent to the existing building – now to be converted to office and consultation space for both clinics – the old and new structures are connected by a covered walkway.

Its long corridor aids smooth circulation for staff and patients, and acts as the ‘social spine’ of the hospital. Along the 125m-long corridor are meeting places, while the building’s form creates courtyards within its bends, providing communal spaces for patients and their visitors.

Herz explains that passive climate design allows for the building to efficiently work with the challenges of the climate, Tambacounda being one of the hottest metropolises in the world. The narrow width of 7m enables the building to forgo air conditioning, being aired and cooled naturally by cross ventilation instead. Mashrabiya-inspired lattice brickwork across both floors provides solar shade and facilitates air circulation, as well as providing a striking visual motif for the hospital. A double roof system, with an inner vault of brick below a sheet metal vault, creates a chimney effect to draw heat upwards and out of the rooms below, and to repel direct sunlight. 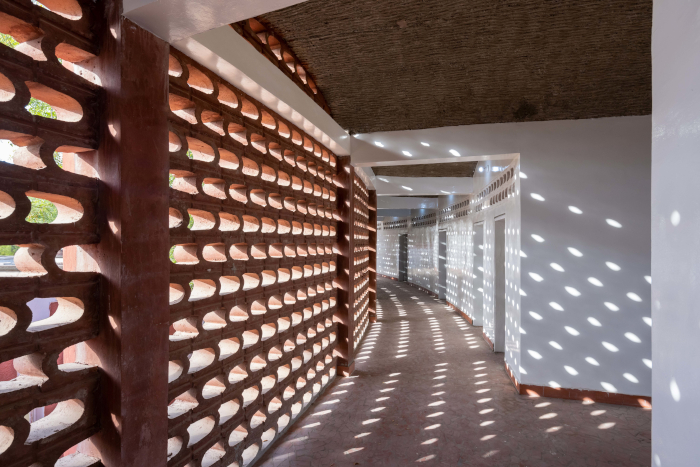 Gaps in the 125m-long corridor’s walls allow the building to breathe, adapting interior environments to the site’s climatic conditions

But beyond providing a much-needed medical facility, the project also considers the wider impact it can have on the local area. Skilled craftsmen and engineers from Tambacounda and the surrounding villages were employed for the project, with local leader Dr Magueye Ba working as general contractor throughout. Herz describes how this was fundamental to the project’s success, and significantly shaped its development. ‘This collaborative process has led to designs that were surprising, that are much more interesting, better adapted to the local conditions and more beautiful than any single-authored project could have delivered.’

Further factors were: using passive building principles to minimise impact on the landscape, positioning the building so its S-curve worked around existing trees, and repurposing materials where possible, such as using a test facade in the construction of a small school for local children.

The project has been an important one for Herz. ‘Designing and building the paediatric and maternity clinic at the Tambacounda Hospital has been maybe the most rewarding experience in my architectural career so far,’ he says. ‘From the very start, it has been a process based on collaboration with the wonderful doctors and staff at the hospital, with the amazing team of the Albers Foundation and Le Korsa, and with a fabulous group of builders and craftsmen around Dr Ba as a general contractor. Building in Tambacounda has taught me so much for my future architectural work, not only on the African continent, but anywhere in the world.’

This is not the end of Herz’s involvement in the area: he and his wife designed the city’s first playground to accompany the hospital, and Herz is due to build additional staff quarters to help attract more doctors to the city.

Coinciding with the hospital’s opening, Herz is presenting the project at the Venice Architecture Biennale – which runs from May–November – through an installation called The Many Lives of Tambacounda. It explores the narratives and lives of those involved in the project, as well as sharing with a wider audience the foundation’s approach, which follows a principle of the Albers’ of ‘minimal means for maximum effect’.