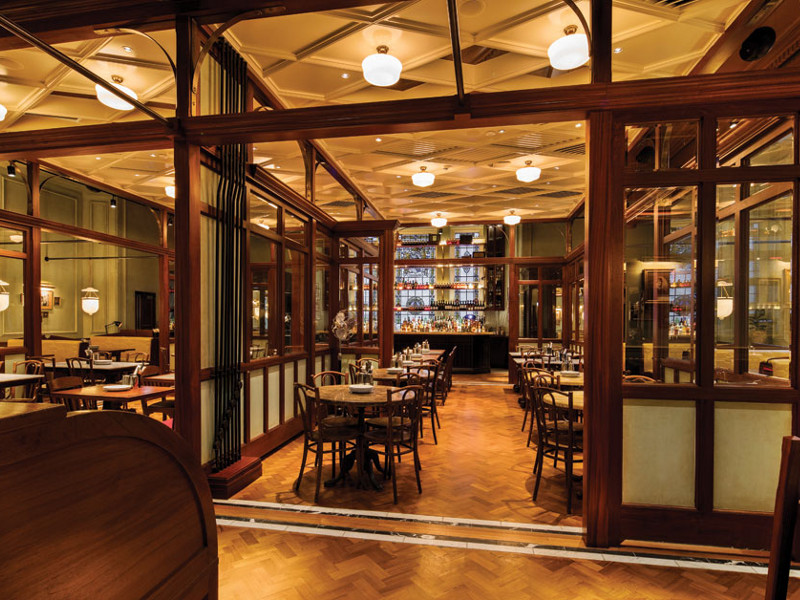 The latest Manchester site for Dishoom continues to evoke the atmosphere of Bombay’s Irani cafes, but with a twist based on its location in a former Freemason's Lodge

Dishoom’s homage to the Irani cafes of Bombay (now, Mumbai) has proved a popular enterprise. The cafes, originally run by Zoroastrian immigrants to the city, appealed to the brand because their ‘welcoming and inclusive atmosphere had a positive effect on the city’, with their ‘faded elegance that welcomed all’. While this specific type of cafe has a much-diminished presence in Mumbai than in its 1960s heyday, the Dishoom chain is growing in the UK. Beyond the food, the interiors, the furniture, surfaces and the qualities of the lighting do much of the work to transport the diner to Bombay. The ongoing design partnership between interior designers Macaulay Sinclair and Dishoom has allowed the concept to develop with each new restaurant. Shamil Thakrar, co-founder of Dishoom, says: ‘Macaulay Sinclair has been instrumental in helping us to really understand how Dishoom should express itself in a physical environment. They design spaces in completely different design languages and time periods, which could only be Dishoom restaurants. They’ve been completely key in our evolution as a business.’ By visiting Mumbai the Nottingham-based Macaulay Sinclair is able to source original period pieces, such as ‘furniture, artwork and lighting from bazaars, antique dealers and marketplaces’

Each restaurant varies in concept depending on its location and the particular references chosen. The one in Manchester, which opened in November 2018, is the seventh Dishoom, and the first located outside of either London or Edinburgh. The provenance of the spectacular historic building in which it is located – a Grade II listed masonic lodge – has informed the design. As a link was found with the Bombay freemasons hall dating from 1899 and that city’s Theosophical Society, Macaulay Sinclair visited both sites, carrying out research and sourcing of materials, to the end that ‘the symbolism and paraphernalia of freemasonry have been woven into the details [of the design]’. The interior designers make regular trips to Mumbai – two or three times a year, in order to soak up the colours, materials and atmosphere that can inform each new venue. In addition to the freemasonry link, the project’s colour scheme was also inspired by the well-known cafe Britannia & Co, located in the city’s Ballard Estate area. The trips to the Indian city also allow Macaulay Sinclair to find original period pieces, ‘including furniture, artwork and lighting from bazaars, antique dealers and marketplaces’, which are restored before being shipped to the UK. A standout piece in the Manchester restaurant is an original teak ‘in/out board’ from a Bombay hospital, which takes pride of place in the lobby. Macaulay Sinclair also collaborated with Light Corporation to rework a number of the light fittings. The company created false relics too: artist Graham Kershaw was commissioned to paint nine portraits of notable Bombay freemasons, which are hung around the restaurant’s main dining hall. Kershaw is also a scenic artist and these skills were put to use elsewhere to visually ‘age’ the walls of the restaurant. The design is partly shaped by the features original to the Manchester site, including the yellow-tinted stained glass windows that let a lovely quality of light into the room, while bespoke leather from Yarwood adorns the yellow banquettes. The building’s former Derby Hall, now renamed The Bro. Cursetjee Dining Hall, features a striking parabolic dome. While Macaulay Sinclair was keen to keep this unique feature, its ‘too perfect’ acoustics weren’t right for a restaurant, as you could hear a whisper from across the room. The solution was to build a hardwood and glass, freestanding pavilion-like structure under it, with a roof partially slatted with openings, allowing the visitor to appreciate the impressive dome above. It creates a room within a room – providing a more intimately scaled space and restaurant-friendly acoustics. Marble tables fill this inner area, and combined with the original parquet and marble floors of the masonic lodge bring suitable grandeur, a hint of ‘academic classicism’, as Macaulay Sinclair describes it. The 8,416 sq ft site has a consistent design language across different spaces. Beyond the dining hall are warmly lit bar areas, such as the wood-heavy Permit Room Bar, as well as a lightfilled family space. Throughout are the finishing touches of waiter stations, screens, and planters, all from Mumbai, while idiosyncratic features such as the ‘bentwood chairs and gingham tabletops subtly remind guests they could only be in a Dishoom restaurant’, says Macaulay Sinclair. With its unexpected theme of Bombay freemasonry, this particular site shows that Macaulay Sinclair and Dishoom are able to shift their game, growing the story of these cafes without diluting the theme developed across the previous restaurants.