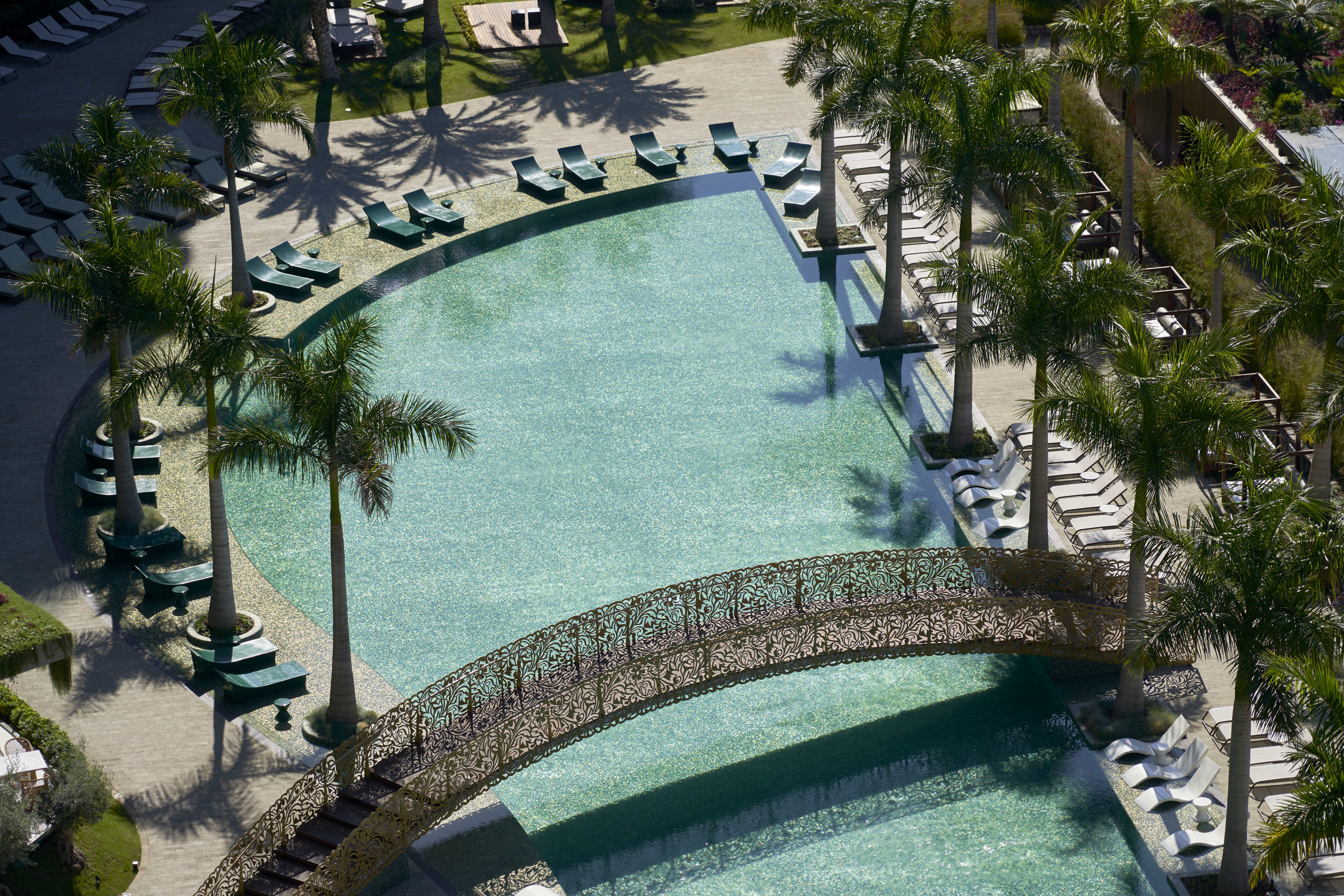 In recent years, the Portuguese island of Madeira has become increasingly popular as a holiday destination; in 2018 it was voted the Best European Island by the World Travel Awards, and has a growing wellness and adventure tourism market. It’s only recently, however, that Madeira has become home to a member of the Leading Hotels of the World group, thanks to the opening of the newly rebuilt Savoy Palace.

Set to be a ‘game changer’ for the island, in terms of Madeira’s luxury hotel offerings, the 16 story Savoy Palace was designed by Nini Andrade Silva with RH+ Architects, and was inspired by Madeira’s rich landscape. One of Portugal’s most renowned designers, Silva is a resident of Madeira, and the island and the Savoy Palace are things that lie close to her heart. “The [Savoy Palace] is an icon in Madeira,” says Silva. “It was completely demolished and then our client bought the land – everyone was very happy to have a Savoy again.”

Only a short walk from the Old Town in Madeira’s capital, Funchal, the Savoy Palace features 352 rooms as well as a number of restaurants, bars, swimming pools, and an 11-room destination spa. “It’s a little bit a story of the old Savoy Palace, and also a completely new one,” Silva mentions. Set beside the wide Atlantic Ocean, the hotel makes use of the views with both its guest rooms and its public spaces; many of the walls feature floor-to-ceiling windows, and there are several rooftop spaces, including lounging areas and infinity pools.

Award-winning architects RH+ worked with Silva to design all the spaces within the new Savoy Palace, taking inspiration both from the unique Madeiran landscape and the Belle Epoch period. The ocean and dramatic mountainous landscape of the island remained on the designers’ minds throughout the process, and can be seen throughout the building – including in the undulating, curving structure of the hotel itself.

This structure mirrors the waves of the ocean and gives the impression that the Savoy Palace is a boutique destination, hiding its grand scale to stop it becoming overwhelming for guests who like privacy. “We wanted it to have the same feeling as a boutique hotel,” Silva explains. “It is a big hotel, but you don’t feel like you’re in a big place.”

This idea was formed to complement the architecture of the building; the architects behind the new Savoy Palace, Saraiva + Associados, designed the hotel with the aim of minimising the number of floors the Savoy Palace appears to have. From the street, passers-by get the impression that it doesn’t have 16 floors, reducing the impact Savoy Palace has on the local surroundings, and stopping people from feeling like it’s a large hotel.

Inside, Silva has blended Madeira’s cultural and natural heritage into her design for the hotel’s public spaces; guests enter into a triple-height lobby that is reminiscent of the old Savoy Palace, but has that been modernised and refreshed. “The lobby has been designed based on the old Savoy, with black, white, and pink,” she says. Colours and textures are incredibly important to the international designer; throughout the hotel guests will notice how the colour palettes change, including from blush pinks to deep green, or into crisp white and gold in the bedrooms.

Behind the lobby, an impressive, curving staircase takes guests down to the pool level. This has been directly inspired by Madeira’s history of embroidery, with the banisters of the staircase designed completely bespoke to look like spools of embroidered material cascading down the spiralling structure. As Silva mentions, “embroidery, wicker and wine are all very important in Madeira”, which is why she has designed “different rooms based on different inspirations”.

For example, she says that two of the “restaurants are inspired by flowers – the orchid and the hibiscus. The Orchid restaurant has been designed [so that the space has] everything to do with the flower. It’s huge, and white; there are wooden elements and pillars which merge into the ceiling in a very organic way. The restaurant based on the Hibiscus has a huge chandelier of the flower. It’s six metres tall, done in gold leaf, and is the centrepiece of the restaurant.”

Upstairs, Silva has designed the guest room interiors to be striking and contemporary; all fabrics are custom made for the hotel, and furniture has been made by Silva to make the rooms truly unique. ““We designed everything, down to the tiles and furniture,” she says. “We like to design, and we don’t want our clients to have the same things – we want everything to be bespoke.” Ranging from 40 to 260 square metres, all the guest rooms feature balconies, and are dressed with elegant furnishings and refined gold detailing, including on the headboards, which again are reminiscent of Madeira’s master embroiderers.

Beneath the Savoy Palace lies the hotel’s hidden gem – a 3000 square-metre wellness spa, housing 11 treatment rooms, a sauna, Jacuzzi, Turkish bath, heated indoor pool and a range of other luxurious amenities. The spa takes its inspiration from Madeira’s natural environment, including the amazing Laurissilva Forest, the largest surviving laurel forest in the world (and a UNESCO World Heritage site).

“We designed the spa as if the guests were in a cave under a waterfall,” says Silva, discussing her designs for the spa. “We have printed onto the swimming pool’s tiles, so when you’re swimming it should feel like you’re in a lake. [Entering the spa] feels like you’ve walked into a cave in the mountains. The rocky man-made tunnels [prevalent on the island] were an inspiration, it’s very natural and earthy. There is a waterfall [at the end of the pool], and lots of cosy, small spaces.”

Due to the intricate nature of Silva’s design for the Savoy Palace, guests can stay within the hotel for days and always discover something new. “You don’t get bored to be inside the hotel because it has so many different spaces and stories, just like the island,” Silva says with excitement. “Every day you can see a different thing, there’s a different feeling – it’s like a microcosm, that’s what we’ve tried to design.”

For example, while two of the restaurants focus on fauna, a third has been designed to encompass nothing less than the entire galaxy. Set on the top floor of the Savoy Palace, the restaurant, named Galaxia, is truly out of this world. “[There are] lights on the ceiling, blinking and simulating the constellations, like the stars in the night sky,” explains Silva. “It’s like being on top of Madeira’s mountains while still being in the hotel. We want it to be a whole experience.”

Creating the impressive hotel interiors took a team of 15 architects and designers three years to complete, but for Silva, the length of time it took didn’t matter – for her, the Savoy Palace was a passion project. “It’s like my baby,” she says. “I also know all the people who have been working on this project have been putting their emotion into it. We all say it’s ‘our’ hotel, like it belongs to us. It’s not just work – the Savoy Palace is a special place, and everyone is passionate about it.”

Rates start at the Savoy Palace from €195 per night, with direct flights on British Airways leaving from Gatwick Airport
savoysignature.com/savoypalacehotel