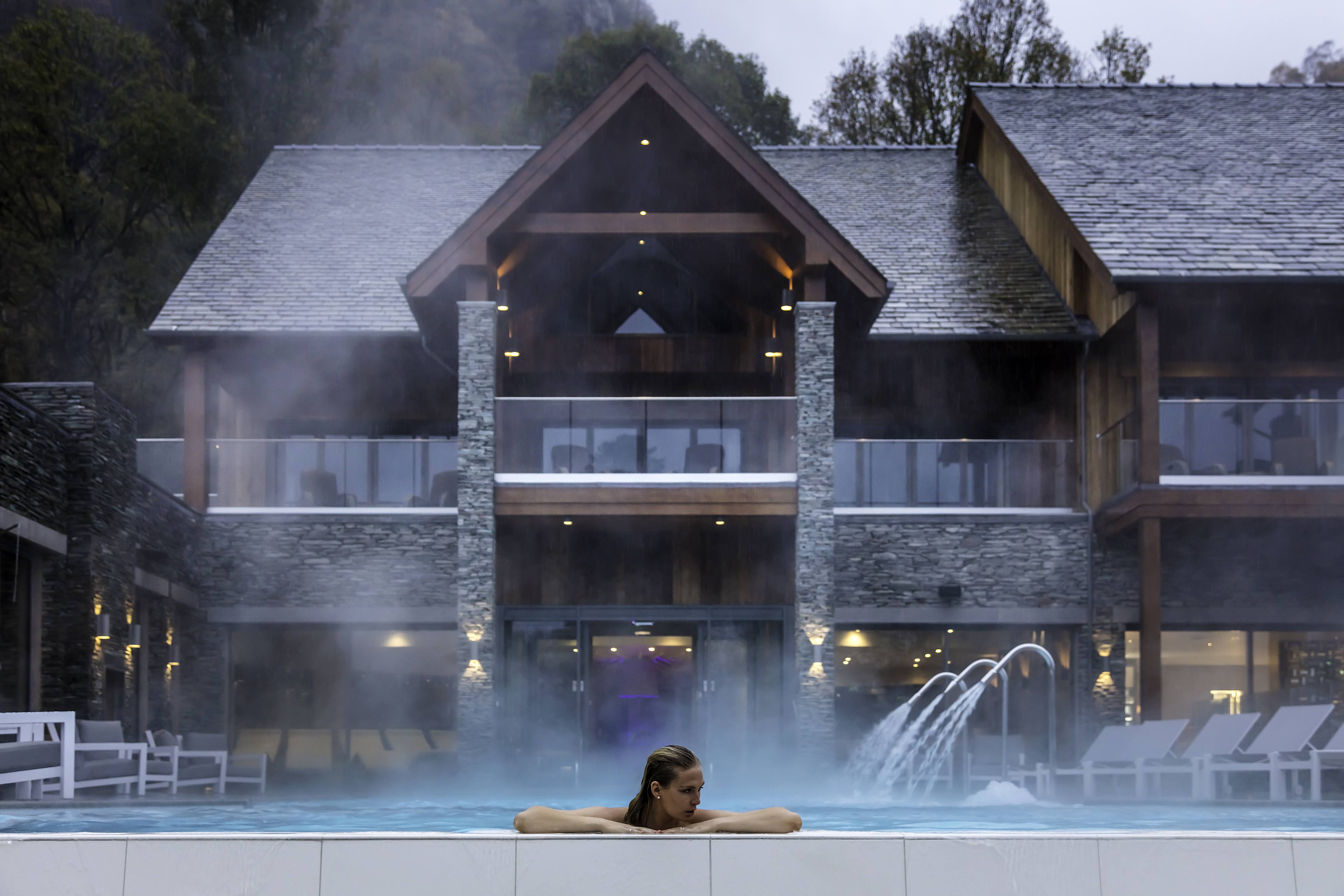 With stunning lake views, award-winning dining and dog-friendly spaces, Lodore Falls Hotel and Spa is one of the Lake District’s most luxurious retreats. Tucked into the beautiful Borrowdale valley for the past 200 years, the team behind the hotel recently decided it was time to rejuvenate the historic building.

As part of the multi-million pound redevelopment, the family run 87-bedroom hotel underwent a full ground-floor renovation, as well as the introduction of a Pan Asian restaurant and the creation of a new state-of-the-art spa and 18 Spa Suites. We spoke to Daniella Hope, director of Lake District Hotels Ltd, to find out more about Lodore Falls’ amazing transformation.

What initiated the redevelopment of Lodore Falls?

From 1947 to 1987 the building was under the ownership of the England family. They had the foresight to build an outdoor swimming pool - and shortly after, an indoor swimming pool, a gym and a sauna - so the hotel was well prepared to welcome the emerging healthy living lifestyle in the 1970s and 80s.

However, from 1988 to 2004, the hotel was under international corporate ownership and no investment was made to update the leisure club (as it was then described) and outdoor pool. When our family-owned company, Lake District Hotels Ltd., took over in 2004, the leisure club was starting to look dated and an immediate update was necessary to bring it in line with the "new look" Lodore, with the addition of an outdoor hot tub and several beauty rooms. In 2015 and with many other hotels in the UK and around the world now offering spa as a given, it was time to pull down the old leisure club and outdoor swimming pool and plan for a new spa. What started out as an idea of a small spa on the existing footprint, bit by bit became a multimillion pound project, which would include the first Pan Asian restaurant in the northern Lake District – as well as 18 new spa suites and one of the most luxurious spas in the North West. The family's Danish heritage dominates the design throughout, ensuring that the new spa and spa suites will stay relevant for years to come.

What was the brief for the project?

The first phase of the redevelopment required a complete ground floor refurbishment of the existing hotel which included the entrance, reception, bar, lounges and restaurant. We wanted a fresh look in this part of the hotel that reflected the colours of the Cumbrian landscape; it was important to retain existing features of the hotel such as panelling and original artwork.

The function room also required a modern refurbishment that would appeal to brides looking for their wedding venue. This included a layout redesign and the addition of a conservatory, designed by Unwin Jones Partners in Carlisle. This part of the project was completed while the hotel was closed for six weeks in January and February 2017.

Phase two was to design the new pan-Asian restaurant Mizu, but at the time of concept we didn’t actually know it would become a pan-Asian style offering! So it was important that the interior could work for whichever dining concept we chose, but at the same time have a unique style. Four brand-new suites were built above the restaurant, overlooking the waterfall and the river flowing through the garden down to the lake. The rooms are spacious (at a minimum of 55m2) and the style is luxury-Scandi X Cumbrian, which reflects our family’s heritage and the countryside around us.

Phase three moved across the river, where we knocked down an old squash court and the outdoor pool, replacing it with a beautiful cedar and slate-clad building. Inside, the 14 spa suites follow a similar style to the first four completed rooms, but each with special features such as walk-in wardrobes, two double beds, wrap-around balconies or showers with a view. The minimum bedroom size is 45m2 up to 82m2. All building work was designed by Unwin Jones Partners of Carlisle.

The most exciting part of phase three was ultimately the spa: we continued the theme of luxe Scandi X Cumbrian style with colours and textures reflecting our roots and surroundings. We wanted understated elegance – no glittery mosaics allowed on site! We didn’t want glamorous, but we wanted to make sure our guests felt like they were having a wonderful, unforgettable experience. The view is our biggest selling point; it can be seen from almost all parts of the thermal suite through floor to ceiling windows, so we wanted tonal colours which wouldn’t detract from this. It was bloody hard work and felt like it would never end! Completion was 10 months overdue.

Why did you want to work with Greyline Design?

We had seen Greyline Design’s previous work in other hotels including Gleneagles, Cameron House and closer to home at Brimstone, and thought they had done a great job of capturing the essence of each business. Their designs have always looked fresh, and they seem to add a unique style that is in keeping with the building and business.

What was the inspiration for the project and its design?

Ultimately it’s a matter of taking the business forward, adding revenue to the business whilst also providing our guests with the luxuries they are asking for. Our heritage is a mixture of Denmark and Cumbria, so it seems apt to use that in our style.

How much were you involved in the project?

The project has been in development since about 2013 when we first decided to renovate the existing leisure club, but as a family we just knew that a renovation wasn’t going to cut it. We put the project down for a year before deciding to up our game and go all out with a full redevelopment.

I personally have been involved in all of it, although admittedly left some of the engineering talk to my Dad who seems quite suited to those details. He left me and Mum to work on the design, the operations and the preparations of running and marketing the business. I wish I had kept a note of the number of meetings and hours spent on planning the project from start to finish. It would be an interesting set of figures to look at! Favourite space after the redevelopment?

Unsurprisingly, the outdoor infinity edge vitality pool – it’s probably one of the biggest hot tubs in England! Throughout the building phase I was adamant I would be the first one in that pool but that never happened, because we had customers in from the moment the pool was warm enough – our hotel guests just could not wait to try it out!

Sitting in the pool and watching the sunset over Catbells and Derwent Water is just the best place to enjoy the beauty of the Lake District. Bedroom 144 is one of the new spa suites above Mizu, and when you’re lying in bed you can look out of the floor-to-ceiling windows right up to the Lodore waterfall. A moment when you can be thankful for rain is when you see how beautiful that waterfall can look at full flow!

Did you / the design team face any major challenges within the design?

There were plenty of challenges with the engineering of the new building, such as cutting out tonnes of rock from the landscape to fit the building into. With the interiors, there was nothing exceptionally challenging apart from the usual issue of having picked a fabric or wallpaper earlier in the year which becomes discontinued at the time of ordering, or trying to be clever about the functionality of a bedroom and making the best use of space.

Sometimes it’s tricky for the designers to understand how functional a hotel needs to be, and no doubt it is disappointing for the designers when we ask them to change a beautiful silk fabric to something that will last a bit longer. At the end of the day, we do run a busy hotel with many people touching and feeling our furniture all day long!

What do you think of the new spaces?

We couldn’t be happier. The finished look of the whole project fitted our initial ideas and apart for a few minor things, such as a chosen tile being too rough (it’s very slip resistant!), there is nothing I would want to change. Even though it was a three phase project, it all ties together so well. I think this shows the amount of time and effort we have all put into the design and detail of everything.

How have guests reacted to the updates / redevelopment?

We are overwhelmed by the lovely feedback we’ve been getting from guests and locals. We have noticed a younger demographic of customers coming to the hotel who want to spa in the Lakes, so it seems that a larger range of people are finding the hotel appealing.

The setting and location; the high quality design and attention to detail throughout the hotel and spa; the feeling of relaxation when you’re in the hotel; the lovely staff who are proud to be a part of this ever growing business.

Anything else to add?

We’re just finishing off the spa garden, overflow carpark, forest seating area and Japanese garden at the back of Mizu, which will complete the gardens. We also still have many more ideas to pursue in future, such as encouraging our guests to use the Derwent river as a wild swimming area.