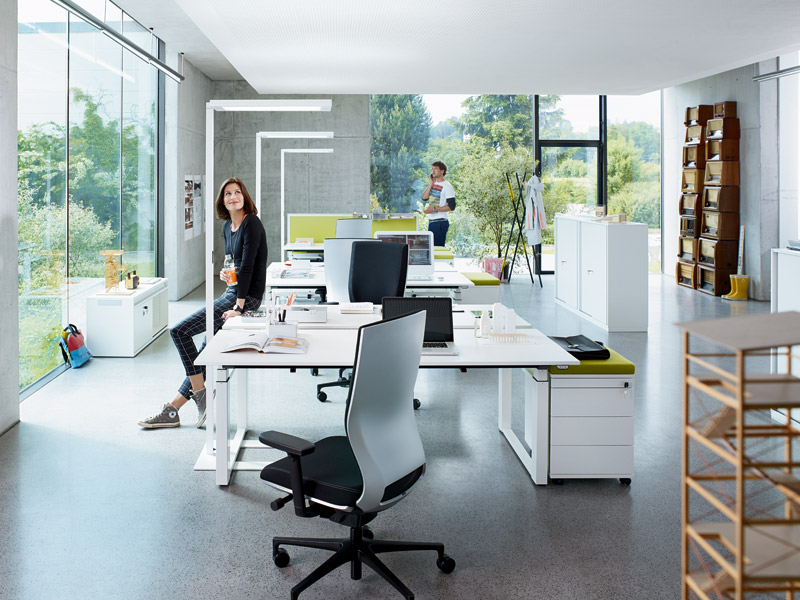 The Building Research Establishment has set up a two-year study project called The Biophilic Office – what role does lighting play in it?

Fads and buzz phrases crop up all the time. They make ideas seem newly minted. ‘Organic’, in relation to gardening and farming, is one of them. Organic is actually how things were done for thousands of years before agribusiness screwed things up with pesticides. In other words, the normal way of doing things rather than some trendy alternative pursued by fey metropolitans. The term ‘biophilia’, though less generalised, is another, gaining traction in design circles in recent years. It’s the radical notion that people are happy being surrounded by plants and daylight.

The word biophilia, meaning love of life or living systems, was first used by psychologist and philosopher Erich Fromm in 1964 to describe a psychological attraction to all that is alive and vital. It was popularised by American biologist, theorist, naturalist and author Edward O Wilson in his 1984 book, Biophilia, where he proposed that the deep affiliations humans have with other life forms and nature as a whole are rooted in our biology. LS Matte artificial skylight by CoeLux, one of the project partners, with creator and CEO Prof Paolo Di Trapani. The device mimics sunlight and the Rayleigh scattering process that creates the blue colour of the sky

In recent years the principles of biophilic design have been applied to the workspace. Apparently being walled up in a uniformly downlit space with serried ranks of samey desks and only a brief glimpse of daylight turns out to be not very conducive to human happiness. Who would have thought?

Biophilic design is not about token gesturism. The odd pot plant dotted around isn’t going to cut it, nor even is a more dramatic intervention such as a living wall, if in isolation. A ‘distinguishing feature of biophilic design is its emphasis on the overall setting or habitat and not a single or isolated occurrence of nature,’ wrote Stephen R Kellert, Yale professor of social ecology, who helped pioneer the theory of biophilia. ‘...Thus, simply inserting an object of nature into a human-built environment, if unrelated or at variance with other more dominant characteristics of the setting, exerts little positive impact on the health and performance of the people who occupy these spaces.’ That said, natural lighting and – if that is simply not possible, well-considered, nuanced artificial lighting, that may or may not mimic daylight patterns – is of central importance. While the whole concept might be rooted in common sense, such changes in design philosophy need to be quantified and proven in some way if companies are to invest in changing their approach to the workspace. The Building Research Establishment (BRE) has therefore set up a 30-month study, The Biophilic Office project – possibly the first of its kind in the world – to ascertain its benefits. An entire floor of a working office building – and the 40 people employed there – are the subject of the research. Both the workplace and its occupants will be tested and monitored for a year before, and then a year after, the office space is extensively refurbished following the principles of biophilic design.

‘The design of buildings can often put too little emphasis on the fact that buildings are for people, with more focus on factors such as energy use,’ says Flavia Lowres, associate director of the Research and Strategic Advisory Group at the BRE. ‘Important though that is, energy accounts for just one per cent of typical office business running costs, while staff costs amount to 90 per cent, according to the World Green Building Council’s Wellbeing and Productivity in Offices report.’

There are innovative new office buildings being designed around the needs of their occupants, maximising natural light, clean air and so on, but they tend to be prestigious corporate flag-waving affairs rather than a typical environment experienced by the great majority of office workers. ‘They work in existing buildings, the owners and managers of which have limited budgets and a need to ensure a return on investment,’ says Lowres. ‘Hard evidence for the benefits of biophilic design is needed if they are to be convinced that investing in refurbishments that prioritise the wellbeing of building users will enhance their business.’

The study is being carried out in conjunction with Oliver Heath Design and a range of industry partners, including Ahrend, AkzoNobel, Ambius, Biotecture, Ecophon, Interface and Plantronics. CoeLux, which produces extraordinarily realistic artificial skylights, and office lighting specialist Waldmann Lighting, represent the electric lighting contingent.

‘Integral to biophilic design is the provision and quality of natural and artificial lighting, including the impact that lighting has on circadian rhythms,’ says Lowres.

The pineal gland in the brain that governs our sleep/ wake cycles, and thus our health and wellbeing, responds to both level and colour temperature of light. Exposure to light, particularly blue light, has been shown to maintain or potentially alter the body’s circadian clock. ‘This has prompted the development and testing of circadian lighting, with the aim of maintaining the correct timing of people’s natural biorhythms in a working environment,’ says Lowres. ‘Most commonly the idea is to improve alertness during daylight and working hours – so delivering better performance – then change to lower brightness, warmer-coloured lighting when it is time to relax.’

Located just off the M25 on BRE’s Watford campus, the building at the centre of The Biophilic Office project was built in the Eighties. It has a predominantly cellular layout with some open-plan space, typical of office buildings everywhere. Throughout last year existing office conditions were extensively monitored and the occupants’ wellbeing investigated. This year the space will be refurbished using biophilic design principles and monitoring continued to give comparable before-and-after data.

This monitoring uses quarterly questionnaires, asking how the occupants felt about their offices and issues such as lighting, glare, noise and other comfort factors. Other aspects of staff wellbeing studied include their fitness, ability to concentrate and stress levels. They have been given wearable technology to monitor their heart rate, activity levels and sleep patterns. The project is gathering other data such as the number of days’ sick leave. Stress levels are monitored by testing saliva samples.

Occupants have already rated the look and feel of their office as ‘poor’, and 67 per cent reported that they would not want to show clients or colleagues around. ‘BRE researchers have found that it is actually quite uncommon for organisations to ask their staff about the buildings they work in,’ says Lowres, ‘although doing so can generate valuable information on improving staff comfort and wellbeing.’

The new layout will have three zones, presenting three different biophilic design refurbishment strategies. Design partner Oliver Heath Design has also consulted with occupants on their current working conditions, comfort needs and business requirements. Based on this, and findings reported in the lighting and other reports on the building’s working conditions, the company is designing areas with different biophilic design approaches to broaden the scope of the research.

The current lighting is antiquated and, one would have thought, not difficult to improve on – entirely T8 fluorescent, ceiling-mounted fittings with prismatic diffusers in most spaces, and ceiling-recessed reflector fittings in the open-plan area.

As part of the monitoring prior to the refurbishment, illuminance and spectral power distribution from the existing lighting, as well as surface reflectances, have been measured. This has included illuminance at horizontal desk level, and vertical illuminance at eye level, which particularly affects circadian rhythms. Researchers have also recorded surface visible light reflectance on walls, ceilings, floors, doors, window frames and desks. Ceiling-mounted light sensors in representative office locations monitor internal light levels, while external light levels are measured using roof-mounted daylight sensors.

The BRE lighting team is using this data to computer model the original electric lighting and daylight distribution in the offices. ‘By modelling annual profiles of daylight illuminance at eye level, and of total eye-level illuminance, they are estimating the levels of circadian stimulation for each person working in the offices,’ says Lowres.

Some suspended and recessed fittings will be installed as part of the refurbishment, but the predominant lighting will be from floorstanding luminaires supplied by Waldmann, positioned close to each desk, providing upward and downward light distribution. Control of the downward component that provides light to the desk and task areas is likely be given to the building occupants, catering for people’s varying lighting preferences. The uplighting is likely to be automated.

‘The upward lighting will make the ceiling more brightly and uniformly lit, reducing the existing contrasts in the visual field which can cause discomfort – especially for those spending long periods of time in the office,’ says BRE’s electric lighting expert on the project, Cosmin Ticleanu. ‘We are considering using automatic controls for the upward lighting, and potentially providing light levels that follow the natural pattern of light throughout the day – starting low and rising to a high point around noon before reducing again as the day progresses to evening.’

Colour temperature, both static and changing, is an important aspect of the study. ‘Half of the project is biodynamic, the other half is split into 4000K and 3000K zones,’ says Jim Ashley-Down, managing director of Waldmann Lighting. It is a crucial distinction. While biodynamic systems are already being installed in some offices, many would argue that this area needs more research given that we have yet to discover their full impact on and implications for the circadian system.

CoeLux will provide ceiling light fittings that are designed to act as artificial rooflights, and using sophisticated technology create the appearance of sky and sunlight. They are obviously beneficial in areas where there is little access to daylight.

The evidence from the monitoring of the offices and occupants will be widely publicised to help health and wellbeing, through biophilic design, become a routine element of office refurbishment. ‘The aim is that future workplaces will enhance the mental, social and physical health and wellbeing of their occupants,’ says Lowres, ‘and in turn enable better business outcomes for office-based companies.’

‘BUSINESSES at the vanguard of workplace design such as Apple, Google and Amazon are investing heavily in biophilic design elements. These principles are shown to improve worker concentration, engagement and cognitive ability but also to attract and retain staff in the “war for talent”. There are four key biophilic principles that can be applied to the spaces we inhabit.

The first is natural light, which helps govern our circadian rhythms. Maximising natural light is essential to our health and wellbeing, whether it’s through windows, roof lights or glass doors. The second is a view out on to nature, which can improve focus and create a greater sense of calm’