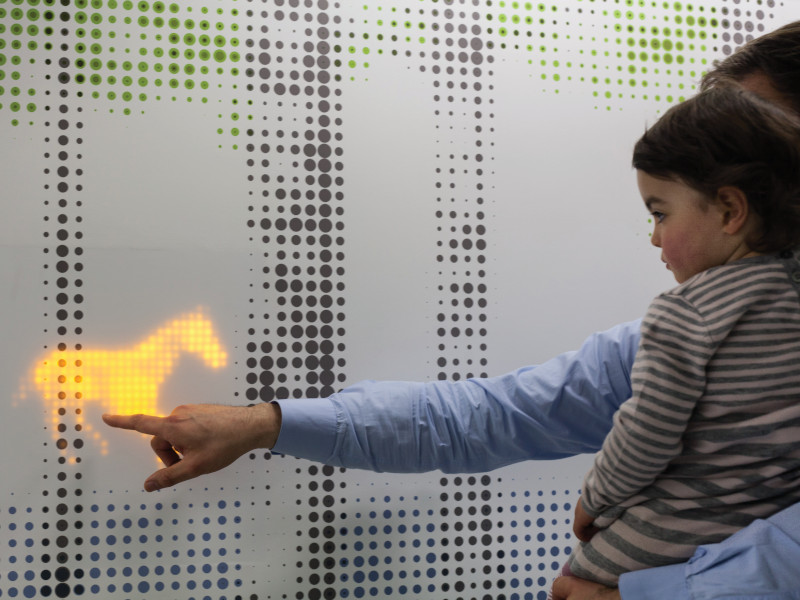 Graham Rollins, associate at Lighting Design International, looks at the significance of the interplay between the blurred boundaries of lighting design and light art

From Vivid Sydney to Lumiere London, many cities now have lighting festivals as a regular fixture in their calendar. In fact, there has never been a greater opportunity for people to immerse themselves (often literally) in the work of light artists, from these urban festivals to an increasing number of gallery exhibitions and permanent installations. As with art in general, this form of creative expression is now often seen as part of urban regeneration, tourism and a way of increasing the socialisation of city spaces and boosting the night-time economy.

Developments in lighting technology, especially LEDs and control systems, and the model of architectural lighting solutions have influenced artists to use light as their creative medium. In turn, light art is influencing lighting projects to push the boundaries in the architectural and interior design spheres. As both an independent professional lighting design consultant and light artist, it can sometimes be difficult to make the distinction between what is lighting design and what is light art. It is apparent that there is already some crossover and I expect the separation to narrow as the two spheres to some extent cross-pollinate. Eliasson’s Your Rainbow Panorama on the roof of ARoS art museum at Aarhus in Denmark. Image Credit: Lars Aaroe

I think perhaps one way of differentiating between light art and light design is by asking if the piece could be easily reproduced to the same meticulous level or effect by a third party from drawings. With artistic projects, there is often a level of craftmanship or precision that can only be reproduced by the artist, setting skill, understanding or poise apart from a lighting scheme that is essentially realised by others. Light art can provide useful illumination, but also remains more on an emotional, expressive platform, unrestricted by functional demands and constraints. Claudia Paz’s Light Garden at the Plaza Norte shopping mall in Lima, Peru, uses light, projections and sound to transport the visitor into a flower-themed world that recalls childhood

With a vast array of techniques and equipment, light art can be digital, sculptural, animated, literary, environmental, experiential, scientific or dramatic. While there has been a technology-driven proliferation of light art in recent years, light as a medium for art has, of course, a very established history. A pioneer was Danish-born American artist Thomas Wilfred (born Richard Edgar Løvstrøm), who in the 1920s designed and built a series of highly sophisticated projection machines, complex mechanical sculptures that combined electric, mechanical and reflective elements. One of the first fusions of modern art and technology, these contraptions produced vibrant, multi-coloured light displays, which Wilfred collectively called ‘lumia’.

He was a formative influence on James Turrell, who together with Dan Flavin began creating iconic light artworks back in the 1960s. Their works have in turn influenced the professional architectural lighting design community for decades and will continue to inspire designers (including those in the theatre – witness Paule Constable’s arguably Turrell-inspired lighting design for the 2017 production of Simon Stephens’ Heisenberg: The Uncertainty Principle).

Their use of colour, temporary perceptual distortion and techniques are recalled in countless architectural projects all over the world. Turrell’s skyscapes and rooms have inspired the lighting of architectural coffers, coves and ceiling/wall profile designs for both lighting designers and numerous lighting equipment manufacturers. The ‘razor edge’ detail where an angled, usually aluminium, profile reduces the edge of a coffer or cove to a point making the ceiling feel ‘paper thin,’ is now one of the many techniques available in lighting for architecture. To date GNI Projects has primarily used physical interactions such as viewing angles, where viewers are encouraged to move around a piece until meaning reveals itself. Heartbeat comprises individually suspended elements carefully positioned to create a desired effect when observing the work at various angles, and when the complete heart is revealed to an interacting couple. ‘Heart Beat encourages visitors to make a connection of love or friendship, by joining hands in front of the sculpture to complete the “circuit” and reveal the symbol of the heart,’ says Rollins.

Danish artist Olafur Eliasson’s pieces and experiments with light often arouse creative architectural and lighting design responses. Eliasson has also further blurred the boundaries with installed permanent architectural artworks such as the recent No Future is Possible without a Past installation at Foster’s Bloomberg European HQ in London, and before that Your Rainbow Panorama on the roof of ARoS art museum at Aarhus in Denmark. In this art piece the 150m of glazed, coloured glass gives colourised views of the city, and by daylight the elevated walkway is flooded with colour from sunlight outside. This effect is reversed by night when lights inside the walkway illuminate it from within, making the walkway a publicly visible artwork – and landmark – from a distance. As with the Bloomberg installation, architectural projects often have a focal point that can employ a piece of light art to bring beauty and interest to the space, as a painting or sculpture would. Interestingly, BDP Lighting’s endorsement and promotion of light art, particularly in its own concepts, has found a logical fruition in an online gallery, Community of Artists, showcasing several of the artists with whom it shares a special relationship. ‘It has been our privilege and pleasure to support a number of artists throughout our many years of practice,’ head of lighting Mark Ridler told FX a couple of years ago. ‘Art is becoming increasingly central to our work so this is partly in recognition and celebration, but also to provide a service to our clients.’

Taking this further, it seems to me that in the future of the lighting design profession it will become more and more feasible for spaces to become the art, immersing the visitor, as is experienced with works by Eliasson.

Light art can skew our perception of space and reality, but it shares this parallel with lighting design and inspires us to challenge our impressions of what lighting design is or can be in the future. Lighting can now be seamlessly embedded in materials or integrated in ways that once would never be imagined, allowing artists and designers to do things that appear impossible. As the boundaries between lighting design and light art blur, and as lighting festivals become larger and more commonplace, artists are pushed to conceive new ways of exciting and surprising their audience. This has been one of the drivers for introducing more interaction into modern light art. The technologically savvy public, now very accustomed to digital interactions through phones, tablets, computers and automated lighting, are open to digitally interactive artworks that again often feature in architectural spaces.

Claudia Paz’s Light Garden at the Plaza Norte shopping mall in Lima, Peru, uses light, projections and sound to transport the visitor into a flower-themed world that recalls childhood, inspiring visitors to play in the space. Paz also created an award-winning installation for the Banco de Crédito building in Lima. An interactive, three dimensional installation, Affinity allowed the public to influence the lighting of the facade.

Multidisciplinary studios such as Jason Bruges Studio (JBS) and Cinimod have married art, science, technology and engineering to create works of extraordinary sophistication, from the early and memorable Nature Trail at Great Ormond Street Hospital (JBS) to a holographic window for Ralph Lauren (Cinimod). Artistic intervention can be on a grand engineering scale. The Sky Reflector-Net for New York’s Fulton Center transport hub is an integrated artwork that magnifies the effect of the natural light, directing it down to the subterranean levels. The concept was created by James Carpenter Design Associates (JCDA), and its design and development was down to an engineer/architect/artist collaboration between Arup, Grimshaw and JCDA.

The much-publicised Illuminated River project, created by US artist Leo Villareal, has been billed as the world’s longest art project, set to illuminate up to 14 of London’s bridges. The artistic vision for each bridge and bespoke software sequencing would be at home in any light art gallery exhibition, but on a project of this scale with so many consultants involved, when does a project stop being art and start being design? Perhaps this successful collaboration between artist and designer is a hint of the future relationship between the two in the lighting industry.

I would hope that my work and that of my contemporaries continues to bring the worlds of light art and lighting design together further. In both cases, whether designing new spaces or developing new artworks, we should be considering all of the viewer’s and occupant’s senses, emotions and physical responses. In this way both platforms encourage the exploration of the human connection with light to its fullest.