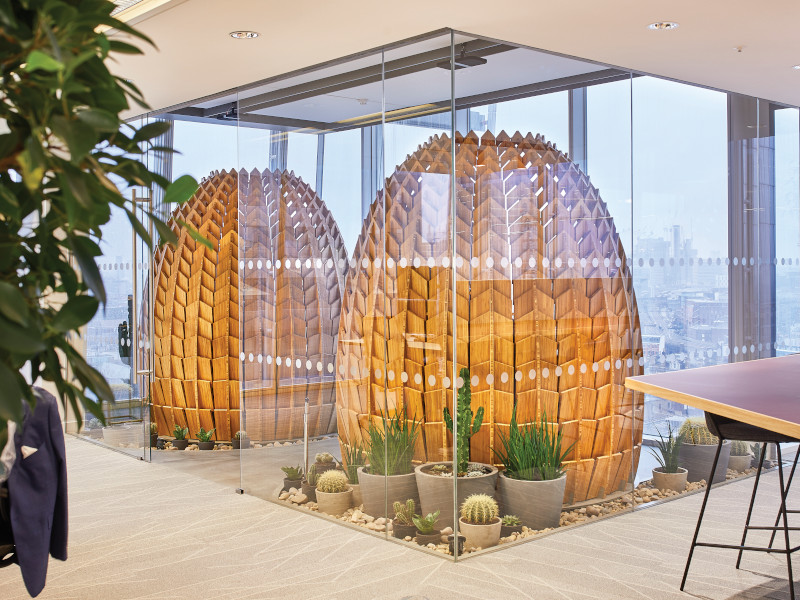 Lighting schemes for the workplace are often indifferent, viewed only in numerical, functional terms – but, ironically, it is probably currently subject to more research than any other area of illumination

Arguably the importance of lighting, specifically well-designed lighting, has been better recognised in certain arenas than others: the hotel and restaurant environments, for instance, retail (at least at the higher end), and aspects of urban planning, to name a few at random. If a lighting designer is likely to form part of the design team, it is often on projects of this nature.

Ironically, though, the workplace, where most people spend most of their time, is on the whole treated to far less consideration. The corporate customer-facing areas – the reception, lift lobbies, client meeting rooms – will probably get the treatment, especially at the big business end, but the ‘back office’, which the drones inhabit, not so much.

Despite the fact that this is where a company’s most important resource – its staff – resides, it is considered adequate to light, by and large, by numbers. Hence the interminable ceiling grid systems of one sort or another. The lighting in Mitie’s Living Lab is cool blue in the morning, brilliant white in the afternoon, and fire-like orange later in the day

Lighting guidance has to some extent addressed the obsession with horizontal planes and downlighting, and has made inroads. The fact that people, whether sitting or standing, tend to look ahead, either at a screen or a wall, rather than downwards, has been acknowledged with a greater emphasis on vertical illuminance. As has the fact that the eye delights in variability and not uniformity, and that individuals have differing requirements according to factors such as age, visual acuity, personal preference, nature of task and so on.

The further irony here is that one of the most significant issues to arise in the past five years or so is the effect of lighting on human health and wellbeing, especially pertinent in the environment where we spend a considerable chunk of our lives. This has taken us into a different realm, the non-visual, which adds another layer of complication given that we are still arguing the toss about the visual side of things. Now that we know there is a third, non-visual receptor in the eye – in addition to rods and cones – we have begun to understand that light not only lets us see but also governs our body clock. We have also started to glimpse the significance of this relationship between lighting and our circadian system, and its as yet largely undetermined implications for our psychological and physiological health.

The upshot is that this area is subject to a fair amount of research and rethinking. There has also been a fair amount of arguably precipitate intervention. On the basis that the human race has evolved primarily under daylight, artificial lighting being something of a later development, it seems reasonable to assume that this form of lighting suits our biology best. However, our modern lifestyle, architectural trends, economic drivers and various other factors have resulted in an existence largely spent under artificial lighting. The logical, if not necessarily well substantiated, assumption has been that if we can’t have the real thing – natural light – the next best thing would be to approximate it with artificial light. Hence the biodynamic lighting system that gives us cool white light in the morning (bluer light having been discovered to stimulate us) morphing to warmer white later in the day when we naturally wind down. The WELL Building standard for one has validated this so-called ‘human centric’ lighting.

The BRE Trust, a charity dedicated to improving the built environment, has recently published a report, Lighting for Circadian Rhythms by Dr Paul Littlefair and Dr Cosmin Ticleanu, on a study it conducted in this field, involving an actual open-plan office in Norwich. The aim of the experiment was to investigate how dynamic lighting, and its timing, affected people, their activities and reported sleep. Like much of the research in this area, the study threw up as many questions as answers. Apart from the fact that the circadian system remains subtle and unfathomable in its implications, there are infinite variables, including people themselves. ‘Overall, there is still considerable uncertainty about how much light is required for circadian entrainment – in other words, for a person’s circadian rhythm to align with the rhythms of light,’ says the report. ‘People vary in their normal daily routines and in how much daylight they are exposed to. In addition, even in a space with “uniform” electric lighting some people may receive significantly more light into their eyes than others, depending on which way they face.

‘More research is therefore still needed to understand better the potential impacts of lighting on circadian entrainment and wellbeing in real-life situations,’ concludes the report, ‘and how best to quantify these in order to produce clear recommendations and guidelines for lighting that can support healthy circadian rhythms and wellbeing.’

Setting aside the obvious, that the focus should be on increasing daylight ingress into buildings, and evolving work and commuting patterns to allow more exposure to natural light, it is clear that it might be inadvisable to wade in with both feet where simulating it is concerned. In other words, we are monkeying around with things we don’t understand. Independent lighting consultant Karen van Creveld, as the 2019 recipient of the Society of Light and Lighting’s Jean Heap Bursary, is currently researching in this field.

‘Preferential doctoring of the light environment to influence certain known biological responses may result in inadvertent and unwelcome effects elsewhere,’ she says. ‘An additional concern is that there is the danger of creating “unnatural” visual environments that may inadvertently impact other core mechanisms.’

Other areas of thought and research on the workplace are less complex and controversial. Biophilic principles have also been studied by the BRE and refer to the idea that humans are wired, psychologically and biologically, to seek qualities of light, view, material and other factors common to the natural world. Inevitably it involved ‘circadian lighting’, although there was a strong component of natural light in the scene, which means it might be hard to determine exactly what was exerting influence on the occupants. The lighting in the Living Lab was linked to an astronomical clock: cool blue in the morning, brilliant white in the afternoon, and fire-like orange as the day wound down. The light also subtly shifted in intensity, giving additional dynamism to the experience. The enclosed space opened out to broad views of the sky and city.

The materials used included varying shades and textures of bamboo for screens, floors, desks and integrated task lighting. Luminaires were embedded in the bamboo screens and wall cladding, both diffusing the artificial light and catching natural light. The pods were a form of break-out space, enveloping users for 15 minutes at a time in a sound and lightscape designed for reflection and mindfulness. Inevitably it was difficult to extricate the role of lighting in this mix, but according to Dr Ucci, the occupants found the study area more conducive than a more conventional space used as a control.

‘The study found that, in comparison with the control space, participants in the Living Lab experienced an improvement in self-reported feelings of enthusiasm (using words such as “excited” and “inspired”) and comfort (“at ease”, “relaxed”) and a reduction in feelings of anxiety. While it was not possible to disentangle the specific impacts on wellbeing of individual environmental factors such as lighting, the study did find that the satisfaction with the visual comfort was much greater in the Living Lab compared with the control.’

‘The overall level of satisfaction with environmental quality was quite dramatically higher in the Living Lab,’ adds DaeWha Kang. ‘The lighting would be a factor in this but we look at it through the interplay of the lighting with the textures and natural materials of the space, rather than isolating light fittings as a single factor.’ There is another more straightforward departure from convention in workplace lighting that develops the idea of variability. Uniformity doesn’t only apply to a particular space but also to a series of spaces. It was the thinking behind Deloitte’s new UK and northwest Europe HQ at 1 New Street Square, London. It is the largest office in the world to achieve, in parallel, BREEAM Outstanding and WELL Gold certification as an exemplar green building and one designed to enhance the wellbeing of its occupants.

Reflecting the varying needs of staff and visitors within a workspace ‘designed for agility and interaction’, there are around 40 different working environments within the new site, all of which have a different lighting treatment.

Admittedly, a lot of these areas do involve the typical corporate client-facing areas but there is an element of staff benefit, in that they include staff social and informal working areas. ‘The lighting scheme successfully reinforces the design of an environment intended to increase staff interactions, with different concepts for staircase zones that are features on their own, and individual lighting applications in more intimate informal meeting or working spaces,’ says Maida Hot, managing director of GIA Equation, responsible for the lighting design in these spaces (Hoare Lea undertook the lighting of the open-plan offices). ‘Each distinct character area has carefully incorporated accents on the planting features, bespoke ceiling structures, furniture and feature luminaires,’ she continues. ‘This created environments with a variety of light settings that can be adapted for the time of the day and events.’

The versatility of the lighting means that some spaces can be multipurpose, says Hot, which involved adapting decorative luminaires to be multifunctional, both during the day and in the evening. ‘Many areas of the project were designed to double as both break-out and work spaces by creating a variety of settings, both in terms of the appearance of the lighting and the user’s perception of the space, and in providing appropriate light distribution and intensity to suit various visual tasks.’

What this all adds up to is that when it comes to workplace lighting we’re not in Kansas any more. It is a complicated business and should be considered rather more closely than is currently the case. But there are also certain basic tenets that can be applied to create a more conducive space in which to spend eight or more hours a day. Obviously, when people are working they need to see what they are doing, but function cannot be the only driver.

We are all familiar with the sensation of being in a pleasantly lit space, whether it’s a woodland or a workplace. It’s not unreasonable (or necessarily costly or logistically difficult) to follow some simple principles in the working environment: maximising daylight; allowing a degree of individual control (from task light to control system); indirect lighting, and illumination of vertical planes rather than just downlighting; varying the lighting according to the role of the space. These precepts are already applied in the more forward-thinking working environments. It’s not rocket science. Yet.