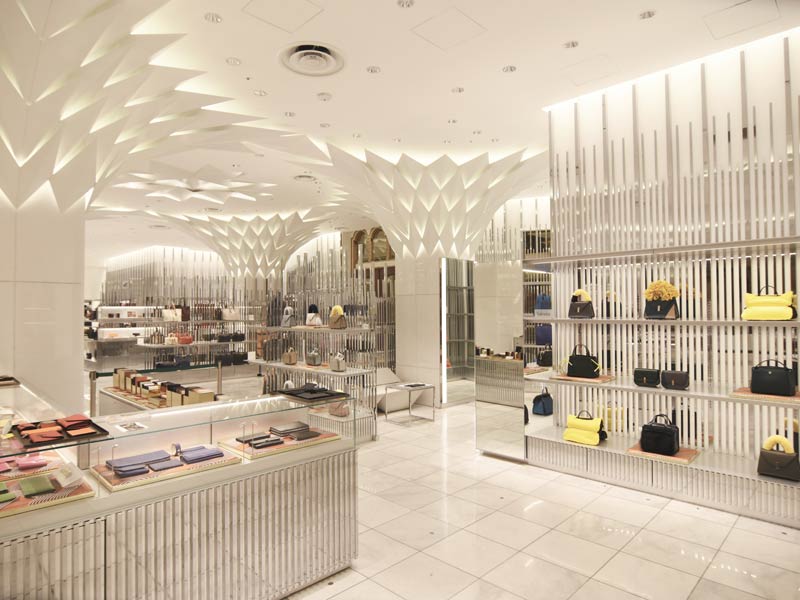 It is a fact of life that people rarely look up. As we wander the streets or navigate a building interior, we seldom examine the plane above our heads, often missing a wealth of architectural detail. The exceptions, of course, are often religious buildings, such as the Sistine Chapel, where Michelangelo demands that we raise our eyes to the ceiling, not only to appreciate the beauty but to focus our attention on the sacred rather than the secular.

A minor theme that emerged from this year’s IALD International Lighting Design Awards was an emphasis on the ceiling as an important plane for illumination, whether to enhance architectural features or to create a new point of interest.

Some of the lighting schemes underline the architecture, others illustrate the consummate effects that can be achieved when lighting and architecture are intertwined, while one shows how creative lighting can counter the brutalism of an urban structure and turn it into something magical. All use light to lift our gaze. Lighting is the obvious fix for dreary urban spaces, and there are countless examples of it being used to resolve the dismal, dispiriting underpass or tunnel.

Rain, in Washington DC, is a particularly clever solution. Visually arresting and a creative use of white light (colour has been admirably resisted), it also avoids any interference with the existing historic structure, using an ingenious suspension method to preserve the historic surrounds and railway. Design challenges included insufficient lighting from existing street lamps, historically preserved walls and an off-limits ceiling.

The tunnel interior rains with light – ranks of suspended, vertically mounted, illuminated rods are programmed with four different patterns, varying the intensity and placement of emitted light. The rods are responsive to both traffic movement and the time of day, the resulting cascading waves of light guiding pedestrians along the pavement and through the tunnel.

The light rod vaults are hung from a newly inserted steel structure, which clamps on to an existing box beam running the length of the tunnel along the street. No part of the design permanently touches either the historically preserved granite walls or the Amtrak-owned steel roof overhead. ‘This is a clever solution in a difficult urban fabric,’ said one judge. The focus of the new two-storey Tennessee State Museum in Nashville is the social, political, economic and cultural history of the state. Stylistically, the building reflects the classically inspired architecture along Nashville’s Bicentennial Mall. The primary building materials – marble, stone, limestone and white oak – are all sourced within the state.

The fact that HGA was involved with the building design is reflected in the level of fusion between lighting and structure, especially in the circular motifs that feature throughout. ‘The lighting team was involved in the early design process, which enhanced integrated lighting concepts and detail development in the overall project,’ says HGA. ‘The design team seamlessly integrated the large ring pendants at the rotunda centre into mechanical slots. They also created a faux rectangular skylight in a corridor to protect exhibits in adjacent spaces by integrating LED backlighting panels with mechanical slots, sprinklers and removable framing for luminaire maintenance.’ The lighting blends classic and modern geometric motifs. ‘By skilfully applying scale and luminous contrast, the lighting design creates beautiful circular compositions rippling through the spaces,’ says HGA. These compositions come in various forms, including integrated architectural details, suspended fittings, and curved arrays of round luminaires. On the grand staircase, a lighting detail within the oculus gently glows at night. The challenge was to produce an unobtrusive appearance during the day, while also avoiding the reflection of luminaires in the skylight.

The cove lighting in the rotunda accentuates the edge of the space with luminous wall openings. LED rings, 6m in diameter, anchor the centre of the rotunda at both levels, softly illuminating the passion flower pattern on the ceiling.

Other large-scale LED rings of various sizes echo and underline the design concept in the retail outlet and conference rooms. Small, round, wall sconces bring an intimate scale to the corridors. In the lobby, 95 round downlights are composed in a curved array on the ceiling, each representing one of Tennessee’s counties. A warm 3000K light was used in public spaces for a smooth transition into galleries, shifting subtly to 3500K in other spaces. The scheme incorporates state-of-the-art office/industrial standard control technology throughout, including automatic timeclock scheduling and daylight dimming. Lighting scenes were also developed for the diverse events taking place in public spaces. Mitsukoshi in Tokyo is Japan’s oldest surviving department store chain, venerable enough to have a railway station named after it (Mitsukoshimae Station), and to have architect Kengo Kuma do the renovation. The architectural concept for the first floor of the historic flagship store is based on a stylised tree canopy, a quasi art deco design featuring leaf-shaped panels supported on pillars. It is another example of what can be achieved when illumination and structure come together harmoniously. Lighting is central to the effect.

‘The canopy extends throughout the first floor and creates a beautiful gradation of light and sense of brightness,’ says Lighting Planners Associates (LPA). ‘A specially designed ceiling greets customers at the store entrance with a gate of light connecting to the tree canopy.’ Light fixtures were mounted one by one behind the trapezoid-shaped leaves – made of aluminium panelling – to form the tree canopy. A series of mock-ups with the architect and manufacturers ensured the intended effect of a soft glow of light from in between the leaves. Exploiting the geometric pattern of the tree canopy, downlights for ambient light were mounted in places that aren’t easily visible.

‘This symbolic space is wrapped in light, creating an uplifting feeling for everyone who visits this important cultural location,’ says LPA. Before its transformation, 160 Spear Street was a ‘dreary tunnel-like lobby’ cutting through a downtown San Francisco tower.

The ambitious lighting scheme folds into the architectural concept, ‘masking the existing infrastructure and transforming the lobby into a modern, sculptural experience,’ says Kristin Peck of PritchardPeck Lighting.

Working with the contractor, PritchardPeck devised a method of installing long fixtures using Velcro to slide them into place and to allow access 3.5m from the ends. ‘Skilled craftsmanship was crucial to ensure the planes were perfect,’ says Peck. ‘Even a small feathering of plaster would silhouette against the coves.’

Light at the wood alcoves was intentionally avoided to create negative space. Trimless downlights were detailed into the custom, wood ceiling panels at the reception to provide warm task light. ‘It feels more like an art installation than a corporate lobby,’ says Peck.