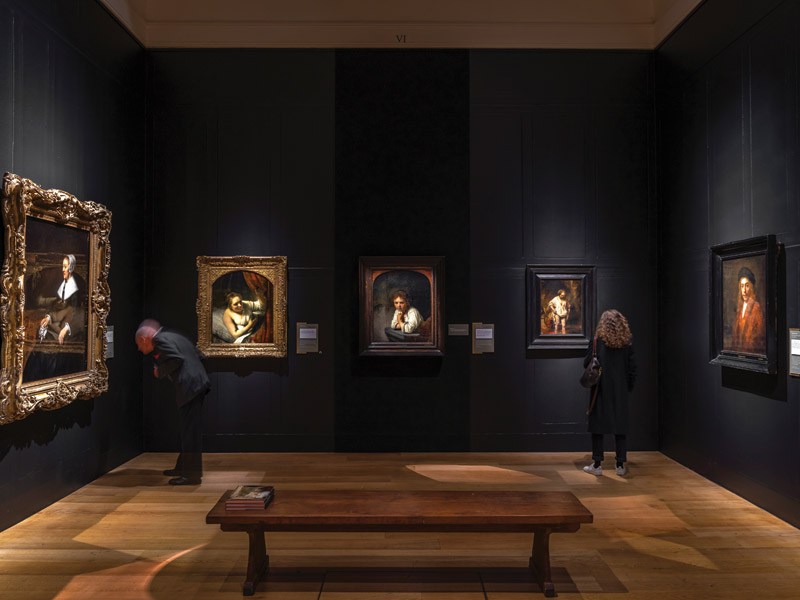 The current exhibition of Rembrandt van Rijn’s works at London’s Dulwich Picture Gallery is, as its title Rembrandt’s Light suggests, something of a masterclass in the importance of lighting. First, it demonstrates the significance of a correctly and conducively lit space when creating a work of art. Second, it exemplifies the crucial role of light for Rembrandt as an artist; it shapes, animates, dramatises and breathes life into his compositions and characters. It was one of the primary lessons he passed on to the 40 or so pupils who received instruction from him at his studio on the Breestraat, Amsterdam, between 1639 and 1658, the period on which the exhibition focuses.

‘The works show that the teaching and manipulation of light was one of Rembrandt’s highest priorities,’ says Helen Hillyard, assistant curator at Dulwich. ‘His practically minded approach alternated between being hands-on, directly intervening in his students’ works, and more detached, setting up exercises that would challenge his pupils to resolve particular lighting problems themselves... A new showcase of Rembrandt’s art focuses on how he used light in his work (even when painting a selfie). Image Credit: Gavriil Papadiotis

As his autographed works make clear, Rembrandt evidently held himself to the same high standards that he expected of his pupils, repeatedly returning to difficult tonal problems, testing himself to the extreme, in order to master light itself.’

The exhibition also shows how crucial it is to light and display artworks intelligently, thoughtfully and imaginatively in order not only to exhibit them to best advantage, but also to aid in understanding and deciphering them. Too often a universal approach to lighting art has ignored the individual qualities of the works concerned. ‘The works show that the teaching and manipulation of light was one of his highest priorities’. Image Credit: Gavriil Papadiotis

Unsympathetic lighting can wash out colours, dilute three dimensions to two, and even detract more obviously through glare, underlighting or ill-considered focusing. It flattens rather than flatters.

A powerful believer in the modelling of light in his works, Rembrandt also had strong convictions about its importance in their display. ‘Hang this piece in a strong light and where one can stand at a distance, so it will sparkle at its best,’ he wrote in a letter of 1639 to the new owner of one of his paintings. Dulwich Picture Gallery made the perhaps unorthodox but inspired choice of inviting award-winning UK cinematographer Peter Suschitzky to orchestrate the lighting for the Rembrandt exhibition, which celebrates the 350th anniversary of the artist’s death with 35 paintings, etchings and drawings. Suschitzky is known for his work on films such as Star Wars: The Empire Strikes Back, The Rocky Horror Picture Show, and Mars Attacks!, and as cinematographer (director of photography) on 11 of David Cronenberg’s films. Although the Student at a Table by Candlelight print is almost entirely black, Rembrandt has modulated the tone of his etching so that the light appears to diffuse throughout the room, illuminating the outline of the student, his study materials and the furnishings. Image Credit: Rembrandt Van Rijn, Student At A Table By Candlelight, C1642. Etching, The Rembrandt House Museum, Amsterdam

‘If Rembrandt were alive today, I believe he might have been a cinematographer,’ says Jennifer Scott, Sackler director of Dulwich Picture Gallery and co-curator of Rembrandt’s Light. ‘As our exhibition explores, he used light to transport the viewer into the narrative.’

Suschitzky was also quick to see the parallels: ‘I have been inspired by the work of the greatest Old Masters throughout my life... Rembrandt seems to me to have been striving to find a universal truth in the human condition and used light to create motion and emotion. This parallels cinematography, where sculpting light and directing the gaze of the viewer to the desired place in an image is essential for powerful storytelling.’ Suschitzky has been aided by technology. A new wireless-control track lighting system by Erco enables a greater degree of flexibility than was possible with the previous halogen installation, allowing him more freedom to tailor the lighting of each artwork and create the mood for each section of the exhibition. The Casambi Bluetooth-enabled luminaires, Erco’s 12W Optec BLE fittings, allow individual switching and dimming of the fittings. Control and programming is all through an iPad and iPhone. A range of tertiary lenses – including narrow beams, floods, wide floods, elliptical floods and framers – were also used to precisely shape the light on the work in question.

The exhibition begins by examining Rembrandt’s sophisticated control of light to convey Motion and Emotion, as the first section is titled. Key paintings show the influence of contemporary theatre on the artist’s method, including The Denial of St Peter, 1660 (Rijksmuseum, Amsterdam), where multiple moments of the story are told within a single scene, and The Woman Taken in Adultery, 1644 (The National Gallery, London), where the figures appear like actors in the temple setting. Here, the lighting is highly atmospheric, using contrast to create a sense of drama and theatricality. Tobit and Anna with the Kid probably began as a training exercise with the specific aim of teaching how light diffuses to illuminate a room, according to Helen Hillyard, assistant curator at Dulwich. ‘Rembrandt challenged his pupil by providing two separate light sources: the open window to the left and the hearth on the floor,’ says Hillyard. ‘The initial sketch shows signs of being painted by the master himself, with the pupil making significant additions to demonstrate the spread of light’. Image Credit: Rembrandt Van Rijn, Tobit And Anna With The Kid, 1645, Inv Nr 805 © Staatliche Museen Zu Berlin, Gemäldegalerie, Photo: Christoph Schmidt

The second section of the show, Manipulating Light, focuses on Rembrandt’s workshop, as seen in his drawing The Artist’s Studio. The illumination here is about clarity and precision, highlighting the means by which the artist evoked day and night, using etchings from the Rembrandt House Museum, including Student at a Table by Candlelight, c1642, and Woman with an Arrow, c1661, as well as his only surviving nocturnal painting, Landscape with the Rest on the Flight into Egypt, 1647 (National Gallery of Ireland).

The Meditative Mood is the penultimate section, exploring the artist’s religious and intellectual works, and the lighting becomes appropriately more mellow. ‘Rembrandt’s ability to create multiple layers of meaning and subtle shifts in mood made his works enduringly popular as tools for private contemplation,’ say the curators. In Christ and St Mary Magdalen at the Tomb, 1638 (Royal Collection Trust), the dawn breaking over Jerusalem echoes the dawning recognition between the characters in the scene. The exhibition lighting appears to augment the dawn light of the painting.

The last section is devoted to Rembrandt’s powerful portrayal of the human figure. The black walls and precise, warm white lighting on the paintings create a sense of intimacy, almost sensuality.

There is a significant lighting coda to the exhibition. Designed by Sir John Soane, the Dulwich Picture Gallery – the world’s first purpose-built art gallery – is arguably the perfect context in which to study Rembrandt’s use of light. Completed in 1815, the bespoke design for the gallery incorporates a series of roof lanterns – a characteristic device of his – which diffuse a natural top light. ‘This created the most ideal viewing conditions for the collection including its masterpieces by Rembrandt,’ say the exhibition curators. ‘This is not a coincidence. These architectural solutions evoke the conditions in which Rembrandt worked in his studio, making it the perfect location to show the exhibition alongside the gallery’s Old Master collection.’

What was considered to be an ideal studio space, especially from a lighting point of view, is represented in the drawing The Artist’s Studio c1659 (Ashmolean Museum, Oxford), which depicts Rembrandt’s own studio on the first floor of his house in Breestraat, Amsterdam. The windows are north-facing, traditionally the optimum direction for offering a cool, indirect and stable light, not subject to the shifting shadows and angles of the sun’s movement. It shows the various strategies Rembrandt used to manipulate light entering the room. The bottom half of the tall, leaded window on the north side of the room is covered so that light only enters through the upper section.

Above, a tented section of cloth is hung from the ceiling, directing the light entering the room and reflecting it down onto the model, who is seated below.