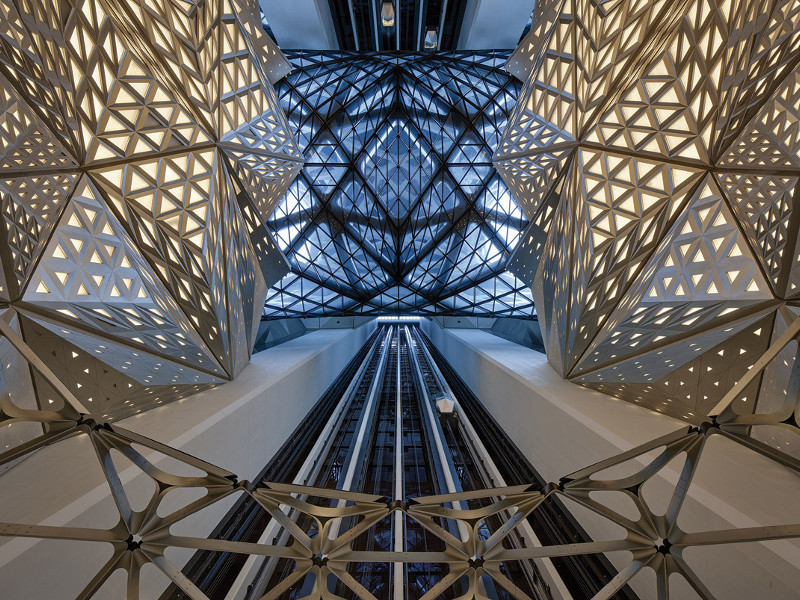 The choice of colour temperature in white light schemes is fundamental. The nature of materials, the colour of surfaces, the style and purpose of a space are all factors that will influence the temperature of white light specified. The use of cool against warm can also allow more flexible sculpting of a space.

The introduction of tunable fittings in recent years has especially helped in environments where flexibility is called for. They enable easier adjustment when changing art exhibits in a gallery, say, or seasonal items of merchandise in a shop, where different temperatures are needed to fully complement and enhance colour and tones. On another level, the introduction of so-called biodynamic systems has become more of a hot topic as design focus has shifted to wellbeing, in this case the importance of understanding the influence of different colour temperatures on our circadian rhythms. That, of course, is a whole other topic and subject to a degree of controversy and continuing research.

The availability of different shades of white is of course nothing new and goes back decades. Having consistency of colour temperature brings cohesion to a lighting scheme. In fact, something guaranteed to induce apoplexy in a lighting designer has always been the sight of an array of fittings whose light sources are a patchwork of cool whites and warm whites, and a few ho-hum shades in between.

Apart from the fact that it looks a dog’s dinner, it drastically undermines the designer’s intent to evoke a particular and appropriate atmosphere. Fixtures with a warm white lamp intended to flatter the skin tones of the diner beneath, for instance, have a less felicitous effect when switched to bleaker bluer tones. Maintenance departments, invariably culpable for ill-considered lamp replacement, have much to answer for.

In any white light scheme, as the following projects demonstrate, the choice of colour temperature is crucial to complementing the surfaces, evoking an appropriate ambience, balancing daylight ingress and, in a couple of instances here, shifting the mood of the interior by switching from warm to cool. ‘Can you turn a corridor into a sculpture, can music become light, and can the energy of light be used to create emotions?’ Those were the starting points, according to Aaron Yassin of A+A Studio, that defined the Light Music concept for a new residential lobby in Washington DC celebrating the city’s musical history.

The installation, which has won an Architizer A+ Jury Award, comprises 23 custom-made Ecosense 2700K LED backlit panels, and combines digital fabrication methods with traditional hand techniques. Intrinsically dramatic, the effect is enhanced by the use of changing colour temperature. The aluminium composite panels were CNC-milled using the scores of Duke Ellington songs, evoking the patterns on player piano rolls. The surface of the panels were hand-gilded with aluminium leaf and the holes covered with translucent acrylic. The light glows through the panels, creating a three-dimensional effect, and glistens on the surface of the aluminium leaf, creating luminescent light forms. It also reflects and shimmers on a mirrored tile wall.

LED wallwashers illuminate the white CNC-milled panels, which form interlocking shapes across the surface of the opposite wall. This creates an interplay of highlight and shadow. ‘It bounces off the wall surfaces across to the tiles and back again, literally creating a chamber of light,’ says Yassin.

Different scenes are created throughout the day by a Crestron lighting control system with 16 zones, three scene settings and a photocell. The photocell near the building entrance reads ambient daylight and controls both sets of LEDs based on this data. The lighting zones are set at a higher intensity during the day, which produces a cooler feeling as the light reflects off the aluminium leaf and white surfaces. When the system dims down the overall experience is warmer and moodier.

‘There are several key elements that are significant to the experience of the colour temperature in the space, but the one that has the most impact is the hand-applied aluminium leaf on the surface of the light panels,’ says Yassin.

The most dramatic colour shift, he adds, is the light on the surface of the vertical light panels in the lobby. The panels are directly parallel with the glass entrance, and despite being quite deeply inset, they glow with radiating blue daylight all day. ‘The relative colour experience changes around dawn and dusk along with the intensity changes based on the programmed scenes,’ states Yassin. The carefully balanced, multilayered lighting of the Azizia Mosque is designed to signal a hierarchy of elements – mehrab, domes, arches and screens – to showcase the level of artistry and also establish a logical sequence of views, aligned with the worship ritual.

The use of colour temperature particularly comes into play in the lighting of the main dome, where it goes beyond pure illumination, and is used to communicate with worshippers and convey a message. At Adhan (the call for prayer) the warm white wash starts shifting to cooler temperatures of white, ending in a blue hue by the time all the people gather and prayer starts. The change is controlled by an astronomical clock that accounts for the time shifts during the year. ‘This is not only visually attractive,’ says Umaya design director Alex Shaw, ‘but also represents the act of elevating oneself spiritually and connecting with God.’

Integrating light fittings into the architecture was paramount, both to avoid visual clutter and to expose the craftsmanship of the finishes. ‘Downlights were avoided where possible, or seamlessly inserted into the ceiling patterns by matching their size, geometry and colour,’ says Shaw. Backlit, the patterned coffers framing the domes were sufficient to provide general illumination.

The imposing bespoke chandeliers, a familiar element in a mosque, were inspired by traditional Arabic patterns and recomposed to form a kaleidoscopic effect. The golden frames hold hand-blown clear and opal pieces of glass, which project natural shadows onto the domes. The driving factor for the choice of colour temperature in the white interior of the Fayette County Courthouse was its new usage. A renovation transformed the 1899 building into a centre with commercial space, private event areas, and a food and beverage outlet. ‘Hospitality and residential environments need a warmer temperature,’ says Chad Rains of Illuminationworks. ‘No-one wants to feel like they are still at the office when attending a cocktail party or relaxing in their living room.’

Restored architectural elements sit alongside more contemporary interventions, so unifying the areas was a key consideration. To help achieve this the temperature is a warm 2700K more or less throughout, although the space changes the temperature, appearing to cool it in certain areas. ‘For the rotunda, we needed a colour temperature suitable for both day and night-time private events,’ says Rains. ‘Since the glass oculus that divides each floor allowed visibility from level to level, including the rotunda, we used 2700K on all floors. The lower floors where the stair occurs, for example, have less daylight, so appear slightly cooler than in the rotunda. The more contemporary design of the lower levels enhances that cooler appearance.’

The centrepiece is the dome room, which had not been visible to the public for over 60 years (it had housed the HVAC systems since a 1961 renovation). Existing incandescent point sources patterned to accentuate the curvature of the dome were refitted with new sockets and exposed LED sources. Individual miniature uplights highlight each column in the upper gallery colonnade. Linear uplights integrated into the lower wall provide ambient lighting and create a visual link to more contemporary areas within the building. The octagonal oculus in the dome room floor allows visibility below to the main stair. A linear light band outlines the oculus from below, reinforcing the connection between the two areas and creating a focal point above the stair. At each level around the stair, linear LEDs in gallery walls uplight the perimeter ceiling. LEDs are also integrated into the stair handrail and guardrail around the stair opening, keeping the use of downlights to a minimum.

Time of day is very important when considering colour temperature, says Rains. ‘If a space is mainly used in the evening, we go much warmer, so it not only feels incandescent but dimmed incandescent. Now that we have much lower CCT (correlated colour temperature) available, we can go as low as 1800K. Care must be taken as any amount of daylight will make such a low temperature feel very orange. It looks great at night, but can be off-putting at noon. Dynamic white sources can play all of this very well no matter what time of day, but not all projects have the budget or desire the complexity.’ Zaha Hadid Architects’ Morpheus Hotel at City of Dreams, Macau, shows two perfect examples of how different colour temperatures work together in a scheme by Isometrix Lighting + Design. Lightboxes were created to follow the unique shapes and forms of the dramatic atrium wall. Glowing warm white, they provide a counterpoint to the coolness of the natural light. Theatrical DMX control-dimmed channels enable the atmosphere of the atrium to change at different times of the day (architectural lighting controls did not provide sufficient flexibility within the central, interior, public spaces, says Isometrix). In the spa ‘snow garden’, cool white chills the (real) snow and sculptural birch trees, contrasting with the warmed tones of the surrounding wood.