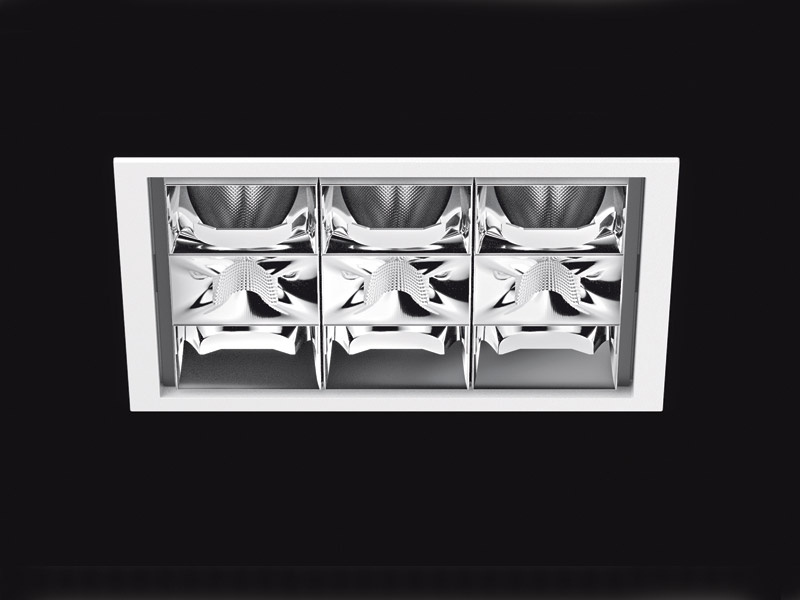 Up until two or three decades ago not a massive amount changed in lighting. The technology developed and improved but at the sort of pace that could by no means be described as disruptive. LEDs and digital technology have changed all that of course, taking lighting into all sorts of unexpected directions: miniaturised, obviously, multi-tasking (luminaires with acoustic properties, air-handling, loudspeakers and so on), addressability, and even as a vehicle of communication (LiFi, for instance). It has also led to extraordinary optics: iGuzzini’s Trick, which creates a line of light on four planes from one fitting, felt like a distinct gamechanger when it launched.

Two recently introduced fittings are the culmination of many developments in this evolving industry. While the first, the Model F smart pendant lamp, is probably literally more at home in a residential or at least domestic-style environment, the second, the award-winning Unico, falls firmly in the architectural lighting category. What both have in common is their extraordinary versatility when it comes to light distribution. Developed by an Austrian start-up called Luke Roberts, founded by Lukas Pilat and Robert Kopka, the Model F is billed as the first smart pendant lamp that can illuminate any part of a room using directional lighting technology. Effectively, that means users are able to adjust the light in any direction so the pendant can be used as an uplight/downlight for ambient lighting and as a spotlight or multiple spots. This versatility is extended further by the facility for dynamic and coloured light, as well as tunable white light. It allows infinite options but, for example, the single fitting could provide light for reading in one area and accent lighting on a particular focal point (dining table, sculpture, painting) while changing the mood with coloured or white light on the ceiling. Operating via Bluetooth, all the different lighting scenes and effects can be controlled by a smartphone using a specially developed app. The downlight element has 84 adjustable segments with tunable white light LEDs, from a warm 2,700K to a neutral white 4,000K. The light quality is excellent at (colour rendering index) CRI>95 while output can be up to powerful 4,000lm. The uplight component provides multi-coloured indirect light and is adjustable in 16 segments with individual RGB and white LEDs. The colour temperature range and CRI are the same as for the downlight element with an output up to a gentler 1,400lm. Maximum power consumption is 75W. As well as the smartphone app, the pendant can be controlled by a conventional light switch using smart click-detection, light alarms based on time/ day and, more recently, voice-assistants such as Amazon’s Alexa and Google’s Siri. The lamp also learns from the user’s behaviour and automatically selects the best light scene when switched on. Lux Review described the smartphone app as ‘perhaps the most impressive element of the Model F, one of the best we’ve used. It’s beautifully simple to use, and you can effectively paint the light with your finger, which is oddly addictive.’ ‘A lot of companies still think that smart lighting means putting as many features in one lamp as possible, even if the features have nothing to do with light,’ said Luke Roberts when an early version, known as Flexo, was proposed. ‘The main purpose of a lamp is to produce the best light possible for a certain task. That means that it illuminates the right area in the right intensity and colour. The purpose of a smart lamp is to make the light more adjustable and responsive.’
luke-roberts.com

UNICO
XAL
Unico, by Swiss lighting firm XAL, won the interior luminaire category at the 2019 Lighting Design Awards, with the judges saying it created a ‘whole new paradigm’. It offers the designer full control over how and where light is placed within a room.

The multiple downlight combines up to nine individually controllable, small 2x2cm LED light inserts. Each has varying emission characteristics and colour temperatures (3,000K and 4,000K) to provide multiple lighting options. The fitting features square or circular reflectors, generating either round or angular light projections, or an asymmetric wallwash reflector that delivers a perfect three-to-one ratio. There is also an anti-glare version (UGR <19), for use with VDU workstations. The micro-faceted reflector technology was developed with the highly respected 60-year-old Austrian lighting specialist Bartenbach. The aim was to bring together precise light control with high efficiency and minimal glare.

In summary, specifiers can choose between two mounting options, seven design shapes, nine light insets, three colour temperatures, and three control options (including Zigbee 3.0 using iOS devices and the XAL X-TALK App), all of which can be individually combined.
xal.com