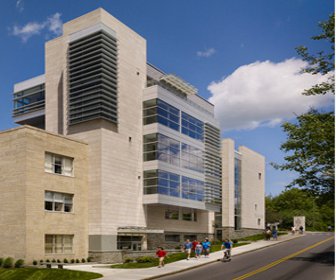 The two projects include School of Hotel Administration, where a former theater fly tower, Statler Hall Tower was converted into a multidisciplinary research and entrepreneurship center; and Cornell Law School, where advanced technology was integrated into a 1930s Collegiate Gothic moot courtroom.

The new tower’s connection to the entire campus was reinforced through a three-storey glass curtain wall that opened the facade and merged indoor and outdoor activities. At the top of the tower, a multipurpose gathering space was designed complete with an outdoor balcony that provides views of Cornell’s campus. The tower renovation also won a Design Merit Award from the New Jersey chapter of The American Institute of Architects.

The courtroom’s new acoustical and lighting systems are designed to integrate into the grand barrel vault ceiling. Custom white oak finishes by Genbrook Millwork were used in the seating areas, lecterns, molding and wall panels that hide two large projection screens when not in use. The courtroom renovation also won an Award of Excellence from the Architectural Woodwork Institute earlier.