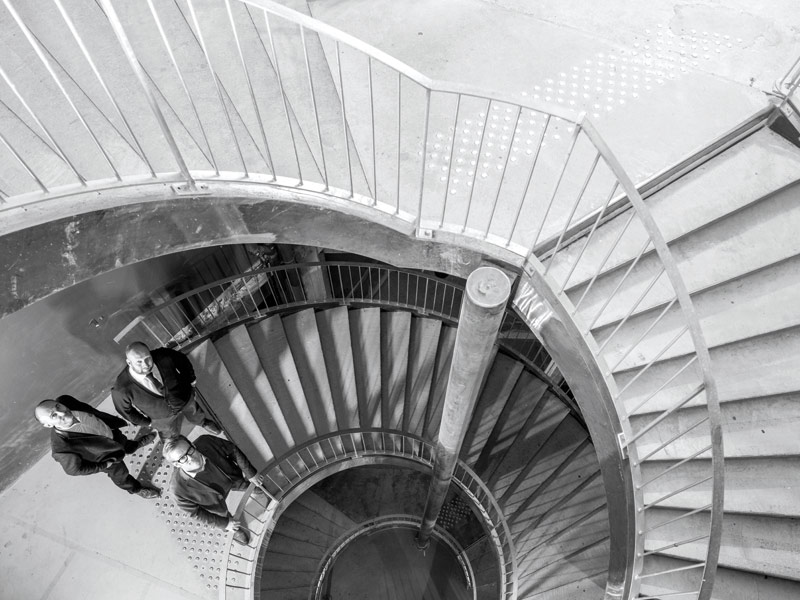 RCKa is only six years old, yet the practice has already clocked up, among other things, a Civic Trust Award-winning youth and community centre (TNG in Lewisham, 2013), a big city art gallery (Liverpool’s Open Eye Gallery, 2011), and a prestigious laboratory project — most architects have to wait 20 years to land one of those — for the world’s largest currency printer De La Rue in the Hampshire countryside.

Finalist twice in Building Design's Young Architect of the Year competition, the practice currently has innovative, community-friendly housing schemes in the pipeline for local authorities as well as major and niche developers.

The secret of RCKa's rapid evolution is probably down to the breadth of the three directors' architectural experience -- Tim Riley, Russell Curtis and Dieter Kleiner had all reached a level of seniority in award-winning practices focused on, respectively, residential, commercial, and R&D, and community and public buildings. What united these three friends was their shared enthusiasm for architecture not just of a certain quality but also of the kind that solves specific human problems elegantly and economically. Their initial experience of bidding for -- and often winning -- competitions consolidated their desire to establish a practice for 'high-quality, pioneering and socially responsive architecture'. Their ambition from the outset was to 'work at a large scale in a public context,' says Kleiner. RCKa set up office in 2008. Not the best timing, economically, Kleiner admits: 'We were younger then. We felt quite employable at the time. So though it was a difficult time and you could see that it was going to become more difficult we felt it was a shared risk.' That risk has clearly paid off -- such is the workload that the practice is looking to almost double its size this year (to 20 staff). The trio's understanding of -- and contacts in -- such diverse markets has undoubtedly helped in finding and winning work. But the crucial ingredient in RCKa's success so far is probably the multifaceted interrogation each scheme undergoes.

Says Kleiner: 'There is no single university we went to, no single practice. We're not emulating anyone. Therefore we have to be more rigorous. There has to be much more of a dialogue.' What usually results is 'innovative architecture, but with a hidden layer that becomes meaningful through use'. RCKa's buildings 'add up to more than the sum of their parts', as Kleiner puts it, often activating the latent potential of people or place: an art gallery elevation becomes a blank canvas on which new work can be programmed; a technology lab is transformed into a prime marketing tool; a youth centre becomes a shining beacon for local engagement and enterprise.

This quality of problem solving only happens with a huge amount of energy, commitment and research, plus a willingness to engage fully and meaningfully with both client and end-user.