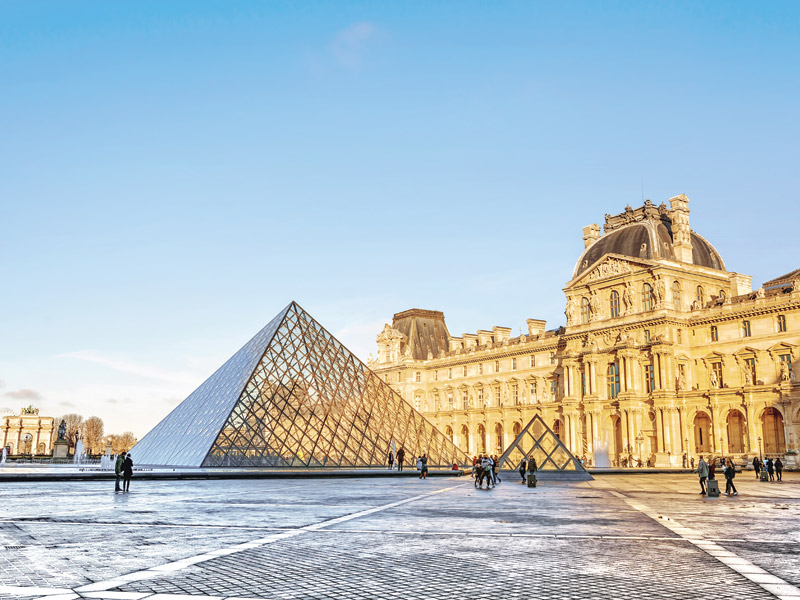 Stephen Hitchins looks at the legacy of the Pritzker Prize-winning Chinese-American architect I.M. Pei who died earlier this year at the age of 102

Lasting architecture has to have roots and I.M. Pei never forgot his. ‘China is my root’ he once wrote. It is said he chose to go to the USA for his education over the UK because he liked Bing Crosby. Well, his buildings certainly sing. Born in 1917 in the newly founded Republic of China to a prominent banking family, he spent his childhood in Shanghai and Hong Kong, cities that symbolised the fusion of East and West and the fluidity of identity.

I.M. Pei was gentle of demeanour, forceful in his convictions, endlessly charming, with impeccably self-effacing manners; an immigrant grounded in the European international style who nonetheless grasped how to make an American modernist building; a sophisticated man who knew how to persevere in the face of opposition, and how to pick his clients rather than his projects (he famously visited the Louvre many times before accepting the commission). He was rigorous, rational, bold, but always pragmatic, and was equally attractive to property developers, corporate chieftains and museum boards.

The recurring geometry, the triangulated edge, the poetry of light, expressive engineering, the razor-sharp clarity of vision, aspiring to monumentality – his elegant, sleek and frequently audacious buildings had it all. Here is a selection…

Louvre Pyramid, Paris
The most famous The Cour Napoléon was being used as a car park by the Ministry of Finance; nonetheless, Le Parisien derided Pei’s idea as ‘The Astonishing Chinese Pyramid’. He was too un-French to be trusted with such an important assignment – it was ‘a gigantic, ruinous gadget’ and ‘defaced one of the world’s great landmarks’. Yet ever since its completion it has been considered a masterpiece, the reinvention of a historic jewel. Marking the 200th anniversary of the French Revolution, this year is the 30th anniversary of the Pyramid’s completion. On the day after Pei died, the museum’s employees gathered beneath it to applaud its creator. Symbolic of a new Paris, it was the portal that unlocked the real project underneath, bringing a new order to both infrastructure and circulation in the most visited museum in the world. Viewing him as ‘filled with promise and imagination’, in 1964 Jacqueline Kennedy personally chose Pei to design the Presidential Library and Museum. His selection over Louis Kahn, Philip Johnson, Gordon Bunshaft and Paul Rudolph made it clear that he was no longer viewed as a developer’s architect but as a major talent in his own right. Sadly, the project became mired in conflict, compromise and controversy, the site changed three times, and the building took over 15 years to complete. Despite his overall disappointment with the finished project, Pei considered the result ‘the most important in my life’. He had arrived. The 215m-tall, blue mirror-glass-clad tower ultimately won numerous awards, but years of legal wrangling, millions of dollars and the replacement of all 10,344 panes of glass could not wish away the engineering flaws in this much-anticipated landmark. Its opening was delayed five years, its cost more than doubled, and it was the cause of major embarrassment to the firm and the profession. As Pei was quoted as saying two years after it finally opened: ‘The glass company had a lot of money, [insurance firm] Hancock had a lot of money, but we did not have a lot of money.’

East Wing, National Gallery, Washington DC
The most important building of its era In 1978 Washington finally had its great 20th century building to sit alongside its 19th century formal classicism and play-it-safe 20th century failed classicism. On a sensitive, conspicuous, and awkward lopsided triangular site the angular structure of Tennessee marble and glass was married to John Russell Pope’s original National Gallery building of 1941 in a series of crisp, angular forms around a triangular courtyard. It was a risky commission and one that Pei carried off so brilliantly that a year after its completion he was awarded the Gold Medal of the American Institute of Architects, its highest honour.

Rock & Roll Hall of Fame and Museum, Cleveland
The most surprising

A commission that Pei initially turned down, this huge glazed tent on the shores of Lake Erie was the result of considerable research by an architect who was not a rock’n’roll fan, but after a road trip with Jann Wenner, the co-founder and publisher of Rolling Stone, and visits to a series of rock concerts, he agreed to take it on. Signature geometric forms and cantilevered spaces were used to echo the energy of rock with the aid of a bold and new design vocabulary that became a dramatic landmark for the city of Cleveland.

Bank of China, Hong Kong
Upstaging everything else Pei was born in Canton (now Guangzhou) on 26 April 1917, but the family moved to Hong Kong for nine years when Ieoh Ming’s father was head of the Bank of China branch there. In 1982, in a demonstration of traditional Chinese etiquette, the bank’s governors flew to New York to ask Tsuyee Pei if he would allow them to invite his son to design their new headquarters in Hong Kong. The result is one of the most remarkable buildings; the sleek externally braced structure uses half the steel of a conventional skyscraper, the interior contains spectacular atrium spaces, and it cost a fraction of the nearby rival headquarters it completely upstaged: Foster’s HSBC. A decade after the Miho Museum outside Kyoto, where Pei borrowed from the traditions of Shinto temples, the architect created this delicate gem of a building in the city where his father was born. Suzhou is a place of canals and classical gardens, and the design reinterprets the black-and-white vernacular and traditional sloping roof landscape of upturned eaves in order to reconcile the new structures with the old, at the same time as creating a series of interlinked courtyards with exhibition spaces organised around a network of cloisters and pools reflecting, as Pei later wrote, that ‘in China, architecture and garden are one’. This was Pei’s last major building, and is arguably the best. He just got better and better, something that can be said of very few architects. Originally planned for the corniche that runs around the bay, Pei convinced the client to create a new island for the building in the harbour. The stark, white towers of travertine were devised to balance Arabic precedents with a modernist interpretation in order to present the richness of Islamic art together with the historical reach of Islam, and emphasise the cultural crosscurrents that produced them. It dazzled the international museum establishment when it opened in 2008 and presaged how museums would become the monumental cornerstone of Qatar’s artistic ambition.

Pei Partnership was founded in 1992 by Ieoh Ming’s two youngest sons. Last in a line of his architectural firms following IM Pei & Associates, IM Pei and Partners, and Pei Cobb Freed & Partners, the master remained a consultant to the business and was associated with this distinctive, asymmetrical, conical Macao landmark with its spiral walkway that was completed in 2009. Visible from the Hong Kong ferry and the Friendship Bridge the planetarium includes a series of exhibition galleries and a multi-functional convention centre.

Beijing
The one he turned down

Pei was invited by the Chinese government to design a series of high-rise hotels in the centre of Beijing. He turned the project down ‘fearing that such buildings would deface the city’.