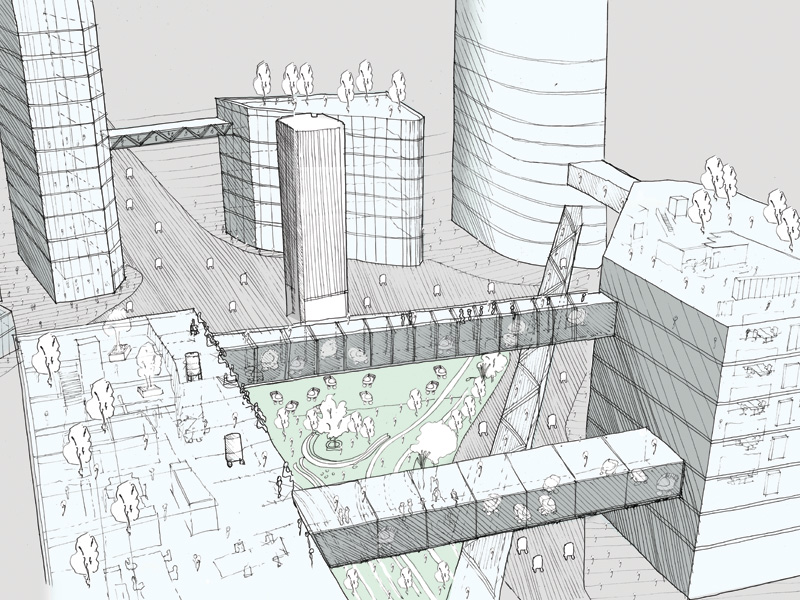 London in 50 years’ time. As transport evolves we are going to see a radical change in how people get around, from using the underground, buses and cars – to the driverless pods of the future. London’s infrastructure will have to evolve as transport systems become decentralised – why not utilise buildings to provide integrated connections to allow door-to-door travel throughout the city?

This would enable the city’s inhabitants to take their lunch break above the city, resting in new indoor and outdoor spaces fused with buildings, above the clouds. Buildings themselves would become taller, larger and lighter, and creating more multipurpose spaces and using glass would be essential, so that we would still have a view of the sky! Greater actual transparency into offices, houses and transport would create wonderful visual connections to Londoners, above, below, and on ground level.

The transparent city would allow its population to be more fully engaged in the activities that surround us every day and get a better insight into what’s going on. Graeme Winestone Graeme is an architect at gpad london, an award-winning architecture and interior design practice based in Old Street, London. gpad works across a range of building types, including housing, private residential, offices and mixed-use developments and takes a design-led approach producing elegant designs, while being sympathetic to each site and its context. gpad is one of the four winners for Islington Council’s open call of ideas on regenerating Old Street Roundabout. Graeme led the team for the competition and has a strong interest in urban design as well as the future development of cities, which he developed during the two years spent living and working in Shanghai.