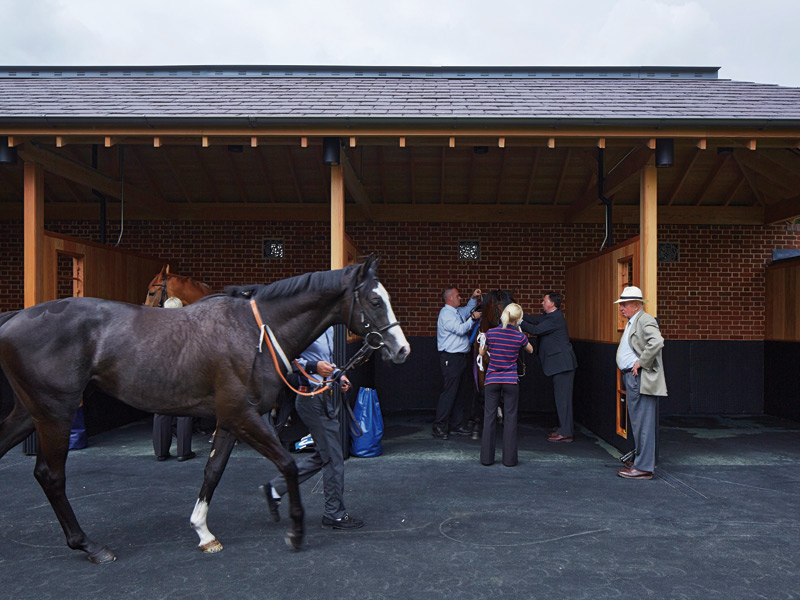 Costly horses were a top consideration when Brendan Phelan took on re-flooring at York Racecourse.

Racehorses are big business and you can't be too careful in making sure they're in top form for the race, and so when Brendan Phelan of Phelan Architects received his brief for redesigning York Racecourse's Northern Enclosure, the gee-gees got top billing. He explains: 'I was asked to think first of the horses, then the horsemen (jockeys, trainers et cetera) and, thirdly, the racegoers.'

The work finished in April and included aspects such as a new entrance for owners and trainers, a new Möet pavilion and extensive works to the Champagne Lawns.

And then there was the flooring for the horses. All the horse areas were laid with rubber crumb, usually associated with children's playgrounds or where there is a risk of anyone falling. Resistant to cracking due to temperature changes, sealed rubber surfaces were installed in the horse boxes, while the external horse walkways were unsealed and porous to allow for rainwater drainage.

As Phelan explains, this was the best option available for horses: 'On race day, horses are specially shod with titanium or other exotic shoes so it's important to protect their hooves.

You often see woodchip or sand put down, but you don't come across this rubberised surface in that many racecourses. But it is the best option. It's even better than rubber block or tiling as these can sink, contract or lift in sunlight.

We used a continuous pour-rubber compound. It's loose laid rubber that is wet and spreads out like Tarmac.'

Buildings that included the vet's and trainers' offices and the weigh-in areas received 10mm-thick riven Welsh slate flooring tiles, while the pathways snaking through the grounds were created from natural Yorkstone paving, local and recycled from Yorkshire.

The redesigned Champagne Lawns were relevelled and made more user-friendly with better seating arrangements.

The lawns themselves are now more sand-based with more durable grass and more able to absorb both rainwater and crowds without becoming muddy. Phelan worked on the path edges to make them 'heel safe' (there are a lot of stilettos on race days) as he installed effective drainage channels. In the tiered grandstands, surfaces are from pre-cast concrete with silicon seals. To waterproof the joints, a silicon seal has been used. But again the thought was of high heels getting stuck in soft silicon, and metal cover strips were installed to avoid this.

Phelan particularly enjoyed working on the York Racecourse as he found it a very human-scale environment. He says: 'It is compact and it has its own gravity as it's well away from London and very popular with those in the North. It's a very progressive racecourse, and from the horse trainer's point of view a fair and flat course with no bias from side to side.'

He has also worked on the North Entrance Building and Millennium Stand at Galway Racecourse, in the west of Ireland, where granolithic concrete screed was put in as a single pour to allow a smooth and polished floor finish.

He says this allows it to take heavy pedestrian traffic without it crumbling or cracking, while the polished finish stops any dust arising as would otherwise happen with a concrete floor under such intensive use. He says the effect of the polished concrete is similar to that in an art gallery or a giant distribution warehouse where robotic equipment needs level, smooth and durable surfaces.

Interestingly, he is no great admirer of the $1.25bn Meydan Racecourse in Dubai, of which he has heard that the workmanship leaves a lot to be desired. He says: 'I've heard for instance that the cladding used on the hotel there is a bit cheap-and-cheerful and not of high quality as is the trainers' area and the pre-parade area, and that it's all a bit soul-less. I'd personally pick Ascot as a great example of a global front-runner of modern racecourses.'

Of flooring, more generally, he feels that it sometimes can be the Cinderella of design projects. He says: 'Floors can be somewhat taken for granted and are only really noticed when they're wrong! If they're right, nobody comments. And one always hopes that the materials used will reinforce your overall design vision. Using a floor is of course a tactile experience and you soon know if that floor is uneven, if it rocks, or if something is loose. And with materials used you know instinctively whether you're walking on timber or paving slabs or whatever. But of course, surveys show that the most popular surface for people to walk on is always grass!'

Brendan Phelan is from Waterford in Ireland, setting up London-based Phelan Architects in 2009. Before that he was design director at EPR.