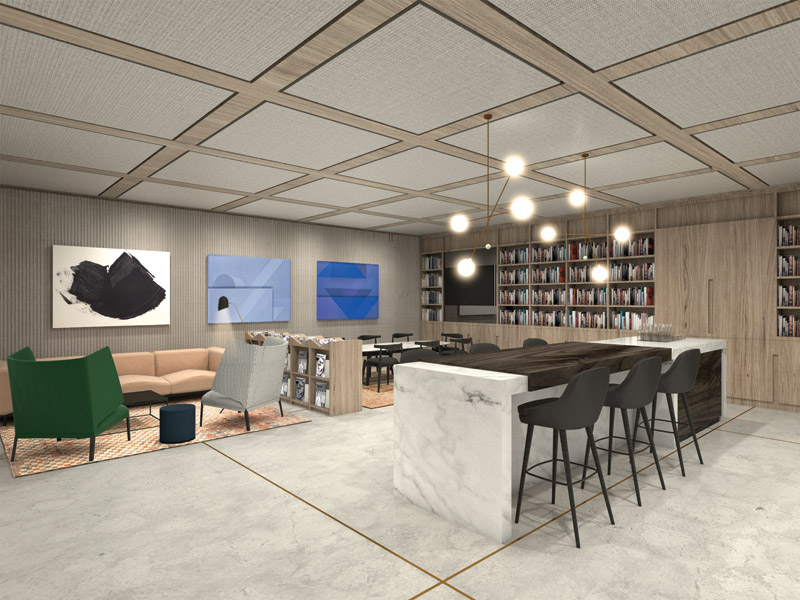 While people have used hotel lobbies for business meetings and laptop work for years, the new breed of hybrid hotels – which mix co-living and co-working – has taken that idea further. Cathy Hayward reports

Office work used to be a 9-5 occupation, a place we went to complete an activity. Thanks to huge advances in technology, all that has changed and work has become an activity, something we can do in any setting – at home, in an office, on the move or in a third space like a hotel or co-working environment such as WeWork. That has led to the blurring of lines between work and life and the move from work-life balance to work-life integration.

And that blurring of lines is also something that’s affecting the hotel sector. A decade ago this was through the introduction of business centres in hotels and now through the hybrid hotel concept. Today’s hybrid mixes co-living with co-working and sees students, hotel guests and long-stay business people mixing together in livework- socialise environments.

The co-working community has already embraced this mixed-use trend. WeWork recently opened a WeLive in New York City, providing small, furnished apartments with communal areas including a WeWork space, exercise studio, kitchen for shared meals and communal roof terrace. WeLive’s next stop is Seattle. Until now, hotels hadn’t been great at creating the environment to allow people to live, work and socialise. Some business centres are a little tired, and lobbies often don’t provide the right ergonomic environment for long-term work. But through hybrid hotels, all that is changing. In The Williamsburg in New York City, there is a blurred line between how people spend their leisure and business time

Look around the hotel sector and the emphasis on creating that sense of community is growing. ‘We have noticed there is a growing sense of community being established in several budget hotel groups including the likes of IHG and Travelodge,’ says Glen Wilson, channel manager, hotels and hospitality at Grohe UK. ‘This is being achieved through focusing on shared social areas including dining, relaxation, entertainment and leisure facilities being enjoyed together by all age groups.’

A key leader in this trend is Amsterdam’s Zoku hotel, which embodies a social community through implementing communal benches in the dining areas, co-working spaces, and the Living Room, a home-from-home space featuring comfy sofas, fireplaces, endless shelves of books and the much-loved comforts of home. There is a progressive transition in the UK industry which sees hotels offering additional amenities in both private guest rooms and communal spaces in an attempt to cater for a multitude of visitors passing through the doors, says Wilson. ‘Short and long-stay visitors, those travelling for business and pleasure, are all integrating yet share the desire of wanting the comforts of home with the luxury of the hotel experience.’

The key to hybrid hotels is getting a local neighbourhood feel to public spaces, says Alex Michaelis of Michaelis Boyd. ‘Making sure that locals are sitting in the lobby, meeting up for informal business chats, grabbing a drink with friends in the bar – it’s so important that the lobby is a thriving buzz of energy that makes you want to come down from your room and be among it.’ Michaelis cites the example of business people who stay somewhere for work and then stay on for the weekend for pleasure. ‘They want to stay on for the weekend and don’t want to be in a traditional, stuffy hotel – they want the incredible service and business amenities but to also know that the hotel restaurant is the neighbourhood favourite – not full of corporate travellers.’ Michaelis Boyd was commissioned to overhaul the public spaces in the Marylebone Hotel in London to create a more hybrid environment. Image Credit: Ed Reeve

He describes arriving at The Williamsburg in New York City and peering over to the hotel bar and lounge on the way to check in. ‘It’s full of people meeting for drinks or perched with laptops; there is a blurred line between how people spend their leisure and business time, and we’re seeing spaces like this that allow you to do both.’

Michaelis Boyd was commissioned to overhaul the public spaces in the Marylebone Hotel in London.

The corporate meeting rooms were redesigned as multifunctional spaces for a range of events from cocktail evening and fashion shows to yoga classes and breakfast seminars.

Reducing the size of hotel guest rooms might seem counter-intuitive, but for Simon Kincaid, director at Conran and Partners, it worked to encourage guests to use the public spaces and amenities at Puro’s new flagship hotel in Kraków. ‘Our design seeks to merge the usual barriers that exist between guests and the local context in order to facilitate greater interaction and a more well-rounded travelling experience.’ The hotel has a bakery at ground level, independent restaurant within the hotel and an urban spa in the basement to welcome locals into the hotel. The design in Puro’s new Kraków hotel merges the barriers that exist between guests and the local context in order to facilitate greater interaction and a more well-rounded travelling experience.Image Credit: Anna Stathaki

‘The result is a more dynamic environment where a wider, diverse pool of individuals and groups can meet, offering the opportunity for potential business connections while actively engaging with the local community,’ he says. Kincaid’s brand and environment design work with Crowne Plaza similarly draws inspiration from the concept of co-working to provide a fluid and open environment.

‘Our Plaza Workplace will offer a flexible collection of agile working spaces modelled on a public square, enabling guests and local businesses to switch effortlessly between work and downtime.’

Hybrid hotels is something Greg Keffer, partner at Rockwell Group, describes as ‘mash-ups’– the merging, blurring and evolution of project types to support how people live, work, and play today. ‘Mash-ups and hybrids acknowledge a basic human need. There’s a hunger for people to share social space in public environments. I think it’s partly a reflection of the physical isolation associated with social media.’ The design in Puro’s new Kraków hotel merges the barriers that exist between guests and the local context in order to facilitate greater interaction and a more well-rounded travelling experience.Image Credit: Anna Stathaki

Harriet Forde, president-elect of the British Institute of Interior Design, agrees, describing hybrid hotels as spaces with appeal to students, millennials and also savvy 50+ travellers, maybe on a second career, or freelances not based in one place. She predicts that a wider network of live/work spaces will be on the horizon.

The Nest, a co-working space within the Hotel Tryp by Wyndham in Dubai, is a great example of a hybrid hotel that has it right, she says, striking the right balance with high-level hospitality and good perks including access to hotel facilities. But she has a warning for the hotel sector. If hotel owners and designers don’t embrace the concept, then others will. ‘The likes of WorkSpace and Second Home may add rooms to their current offerings,’ she concludes.