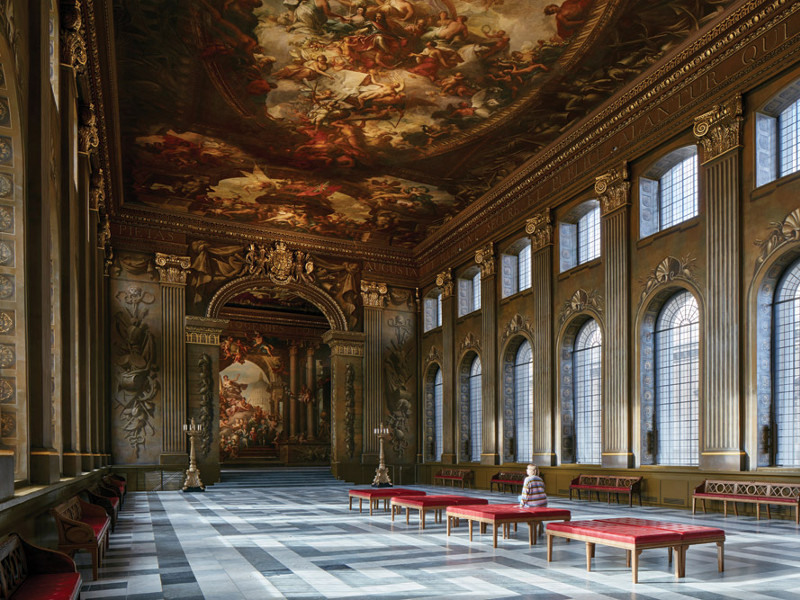 A multi-million pound project sensitively restores the ‘Sistine Chapel of the UK’ for the Old Royal Naval College, and the innovative methods used call into question what conservation means today

An £8.5m project has restored 3,700 sq m of painted surfaces in the Old Royal Naval College’s Painted Hall, which is situated within Greenwich Hospital and is part of a UNESCO world heritage site. The conservation project seeking to protect the artwork for many years to come has been innovative in its techniques and scope, and calls into question what conservation should mean in the 21st century. The ‘Sistine Chapel of the UK’ surely deserves to be well-known and well-visited, but this has hardly been the case for The Painted Hall. Greenwich Hospital was built for retired seamen, in the manner of Les Invalides in Paris and Chelsea Hospital, and built by the best: designed by Sir Christopher Wren in 1696 and with significant parts executed by Nicholas Hawksmoor and Sir John Vanbrugh. The Grade I listed Painted Hall itself earned its painter, Sir James Thornhill, a knighthood. Yet until the latest conservation efforts, the site has not been presented in its original glory. Part-funded by the National Lottery Heritage Fund, the project was led by Will Palin, conservation director at the Old Royal Naval College, and Martin Ashley, of Martin Ashley Architects, who is the surveyor of the fabric for Greenwich Hospital. The heft of the project was the conservation of the painted surfaces, but much of what needed to be dealt with were previous attempts at conservation. Varnishes applied to brighten the colours are quickly affected by environmental conditions, rendering the varnish cloudy and the painting obscured – ‘as if seen through a gauze’, Ashley explains. The last great restoration in the 1950s removed up to 15 layers of this well-intentioned varnish, but the solution now is gentler – certain solvents remobilise the fluid of the varnish, softening the cracks and bringing the colours back into sight. As Palin explains: ‘The philosophy with an intervention of this scale now is to not do anything that is not reversible … and you’d never do more than you need to do’.

Combined with this minimally invasive approach, detailed analysis conducted by environmental consultants Tobit Curteis Associates aimed to recognise the processes that cause the deterioration in the first place. These were solar radiation, ultraviolet radiation, pollution, and changes in relative humidity. An innovative combination of techniques and new technology halted this damage: an inadequate and uneven heating system was replaced with a system of units that independently adjust in reaction to relative humidity across the hall, and there are new, specialist, solar-controlled blinds to counter solar and UV radiation. Meanwhile, lighting for the painted ceiling is provided by discreetly positioned LED lights, which allow for more details to be visible than ever before. It was found that the regular use of the outside entrance to the Painted Hall was largely responsible for destabilising the internal environment. Changing the way visitors entered could help considerably. Introducing a series of environmental buffers between outside and the hall, visitors now come through the King William Undercroft, with each end sealed by glazed screens, before ascending the stairs to the Painted Hall at the other end. It was important the new entrance had the appropriate prestige; fortunately, Nicholas Hawksmoor’s spectacular undercroft proved fitting once revealed. Having been divided and partitioned in the late 20th century, it has been brought back into full view, while boosting the visitor experience with a new cafe space.

Hugh Broughton Architects’ design is modern but sensitively done. Stone flooring was installed, and by dedicating project funds to installing underfloor heating, clutter such as radiators could be cleared from the vaulted space. Other functional aspects were hidden – for example, perforated banquettes act as acoustic absorbers. The delicate metalwork for glass screens of this size could only be made outside the UK. While visually echoing Wren’s earlier window glazing, the commissioning of the Italian specialists Capoferri reignites the tradition of the original Painted Hall of bringing in the best European craftsmen.

The architects’ embrace of modern design in a conservation project may seem contradictory, but Ashley is against trying ‘to freeze time’ and creating a pastiche. Complementing the 40 years’ experience of Martin Ashley Architects (and the ‘genius’ of Palin as conservation director), Hugh Broughton Architects was selected from many applicants to design the new space. Finding the process so productive, the two practices have since collaborated outside the project. The remains of a Tudor palace, where both Henry VIII and Elizabeth I were born, can be seen through an elegant, oval-shaped opening in the floor

As Ashley sums it up: ‘Breathtakingly beautiful historic buildings can sit wonderfully well next to beautifully conceived and detailed modern work.’ This approach to conservation draws on contemporary innovations in the design of space, its circulation and facilities. The project has won a number of awards, but a great achievement is the social innovations the team made to raise the profile of conservation and of the building with the local surrounds. Palin has been responsible for outstanding public engagement and education, where the team has gone out into schools and hospitals, and to specialist colleges for skill exchange, overall recruiting a ‘battery’ of 110 volunteers, Ashley says. The skilled process of restoration fascinated people, and when scaffolding was erected for a year and a half (made accessible with a lift in addition to staircases) more than 86,000 visitors ascended it. It is about accessibility on all levels: intellectual, methodological, physical. The hope is the Painted Hall will once more figure largely in the public imagination and public esteem. This is what Ashley sees as the role of conservation today: ‘It’s not about turning places into museums; it’s actually the antithesis of that … it’s about saying ... “this is fabulous, but let’s make sure it serves a really, really beneficial purpose … for the 21st century”, and that’s what I think we did, and that’s what I consider my job to be.’