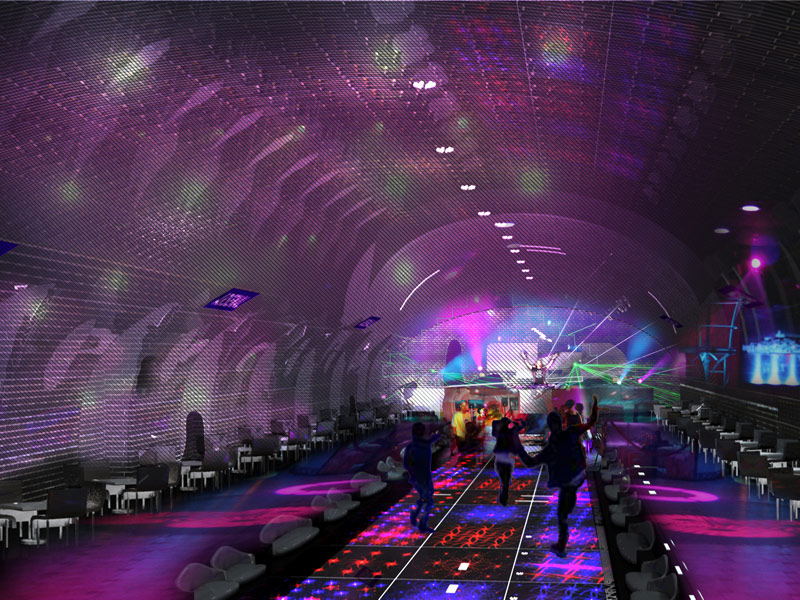 In the autumn we went exploring the ‘lost’ Underground stations of London and looked at the exciting future they may be facing. Now we go across the Channel and to see how Paris is dealing with the unused elements of the Métro.

How would you consider transforming an abandoned station on the London Underground? What is the potential of British Museum, for example, the Central line station you might just catch a glimpse of between Tottenham Court Road and Holborn, where no one has been since 1932? Or what about the ghosts that maybe linger at Down Street, between Hyde Park Corner and Green Park on the Piccadilly Line, and also closed in 1932?

Aldwych was at the end of a spur off the Piccadilly line. During the First World War the National Gallery collection was stored there, and in the Second World War it was home to the Elgin Marbles, but since 1994 it has only been used for the occasional film set. You might have seen it in The Krays, An American Werewolf in London, Patriot Games, Atonement, and Superman IV. It was Sun Hill in television's The Bill. Even the disused Jubilee line platforms of Charing Cross occasionally get an outing, in movies such as Skyfall.

Plans for abandoned Paris Métro stations from Laisné Architect and Oxo Architectes include a theatre.

The shortest-lived and most-venerable of stations, it opened in 1890 as the northern terminus of the City and South London Railway, the first electric Underground but was decommissioned in 1900. Transport for London admits to 'around 40' disused stations. Some were relocated but 20 have disappeared from the Tube altogether.

There are ghost stations everywhere. History has moved on and left them behind, with Correos one of three that disappeared in Barcelona. There were barbed wire fences across the rails of some of the Geisterbahnhöfe in East Berlin to prevent escapees from getting out along the tracks. The term was never official but West Berlin subway maps labelled them Bahnhöfe, auf denen die Züge nicht halten - stations at which the trains do not stop. East Berlin subway maps did not show them at all.

Plans for abandoned Paris Métro stations from Laisné Architect and Oxo Architectes include a garden.

Paris has two that were built and never used: Porte Molitor and Haxo. The first was constructed in 1923 to service two stadia, Parc des Princes and Roland Garros. Once built it was decided that the logistics of the operation were too complicated to make it work. Similarly, when a special tunnel, the voie des Fêtes linking the Place des Fêtes and the Porte des Lilas was constructed in 1921, Haxo station was built linking two lines. But it was never used and, without access from the street, nobody knows it is there. However, Arsenal, St Martin, the Champs des Mars and others still await their fate.

With the densest subway network in the world, Paris boasts the second busiest underground transport system in the world after Moscow. Nowhere in the city is further than 500m from a stop, there are more than 300 stations, and most of them exude character. Architecture critic Ian Nairn once expressed the view that the French genius for letting-alone was at its strongest when it came to naming stations. Generally named after neighbouring streets, and double-named at street intersections, he considered poetry flowed from conjunctions like Montparnasse- Bienvenue and Sèvres-Babylone. From Champs-Elyées to Bastille, from Arts et Métiers to Ch??telet, many of them are unique, and they all have stories to tell. And once inside, there was none of the drab character of the booking hall at Piccadilly Circus.

The first Métro was not opened until the Exposition Universelle in 1900 when Paris was utterly sure of itself. Art nouveau may sadly no longer writhe its way over all the details but architect Hector Guimard's vibrant spirit and a few ostentatious drooping-flower entrances remain. The women who sat and punched tickets and appeared to all intents and purposes like the women who knitted as the guillotine fell have disappeared, as too have the first-class carriages since 1982, and those automatic gates that closed to prevent you from catching a train at the last minute. What might be done to put some romance back into the 'lost' stations of Paris?

Plans for unused Métro stations include a swimming pool

Nathalie Kosciusko-Morizet, or NKM as she is universally known, and whose graphic identity for the mayor of Paris election made kitsch use of the M as a heart over the word Paris, put design at the heart of her agenda when she unveiled a set of proposals to makeover the Métro's phantom stations. Seven weeks before polling, the woman who was ridiculed for not knowing the price of a Métro ticket displayed a set of eye-catching images showing how the 16 long-shut stations might be transformed in the event of her being elected in March 2014. She wasn't.

NKM was further lambasted when she described the busiest line on the system as 'a place of charm'. She amazed everyone and compounded her mendacity with a real corker when she told Elle magazine that it was where she could interact with other Parisians on a regular basis. Still, politics being politics, two firms were hired to bring some charm to this underground potential. Laisné Architecte and Oxo Architectes drew up the plans.

Nicolas Laisné established his office in 2003. Having collaborated with Jean Nouvel in Doha, Rio, New York, and Taipei, and Steven Holl in St Etienne, today Laisné Architecte is working around the world, from an old converted factory in Montreuil close to the Périphérique and a convertible public space on the site of the 1963 World's Fair in Seattle to a 40,000 sq m tower in Taiwan, offices and a conference centre in New Delhi and a condominium in Lima.

Having designed so much housing in France it would be easy to see the practice pigeonholed, which would be a mistake. From the Museum of Bavarian History on the banks of the Danube in Regensburg to a hotel in a Latvian forest, from a mediathèque in Lyon to a music school in Gonfreville, a small planetarium and space museum in Vaulx-en-Velin to a tower in the port of Rotterdam, the firm is difficult to classify, either by building type or client, project size or location. It seems that it reinvents itself every time it starts a new project.

The implementation of proposals for abandoned Paris Métro stations (including a restaurant cafe) rested with Nathalie Kosciusko-Morizet winning the election to become the city's mayor. She lost.

Manal Rachdi of Oxo Architects, with whom Laisné has frequently collaborated, worked with Duncan Lewis from 2003 to 2005 on a school complex at Obernai, south of Strasbourg, and social housing schemes in Valencia. His work on the library at Clermont- Ferrand and an office project at Boulogne Billancourt led to his involvement with Jean Nouvel on the Seoul Opera House, later a project for the Paris Philharmonic in 2008, the competition entry for the Museum of Modern Art in New York and other American projects for Nouvel. Oxo was established on his return to France in 2009, since when Rachdi has also been a professor at the l'école d'architecture de Versailles.

The mischievous experimentation allied with social responsibility and humour characterise the combined talents of Laisné and Rachdi, and they are in evidence under ground in their proposals for those abandoned stations. Their ideas, presented to some astonishment, ranged from refectory-style restaurants to auditoria, art galleries, theatres, nightclubs, gyms, even overlong swimming pools and a subterranean garden. Places to relax, train, perform, create, exhibit and eat, in a series of old/new, familiar/unfamiliar surroundings, there could be a real cache to this urban experiment, if the idea could be made to happen. The potential range of leisure development could be brought to areas that currently lack such facilities.

This is about a slow transformation; to find, as opportunities arise, a new and exciting way to take possession of these lost places. NKM further proposed to set up a creative platform, for designers and architects to submit their ideas for the reuse of these stations, and for the public to vote on the proposals.

The implementation of proposals for abandoned Paris Métro stations (including an art gallery) rested with Nathalie Kosciusko-Morizet winning the election to become the city's mayor. She lost.

The ideas have not been universally welcomed. Difficult, expensive, and predictably with concerns immediately raised over issues of safety (none of which are insurmountable) as a counter to this proposal - and perhaps to avoid commenting on the overcrowded Métro system at all, or the latest member of the rotating team of First Ladies in France, or anything else that might be controversial - the Socialist mayoral race winner Anne Hidalgo boasted of the high number of tourists rather than anything new she might propose in the way of a design platform. As Paris is progressively sold off to African dictators, Chinese party members, London commuters, and one new resident, Scarlett Johansson (who amazingly, surprise, surprise, finds Parisians 'terribly rude'), this was politically wise.

This is rather design by treasure hunt, going under ground to unearth the forgotten, and in some cases the secret, history of a city to build something new; delving below ground into the labyrinthine life of Paris, to visit a potentially reborn world in miniature, and to discover a renaissance makeover built on the subterranean myths and mysteries through the mists of time - surely 'You must remember this?' We'll always have Paris.

It may well be a moveable feast but in certain stations the trains have shunted off, never to return. The City of Light's abandoned Métro stations may well have been transformed - had NKM won. They still could be. As in London, these stations have been used as film sets, used as dumping sites, or simply boarded up and abandoned. They are likely now to re-enter that half-life again.

To swim in the Métro may seem like a crazy dream, but one day it may yet come true.