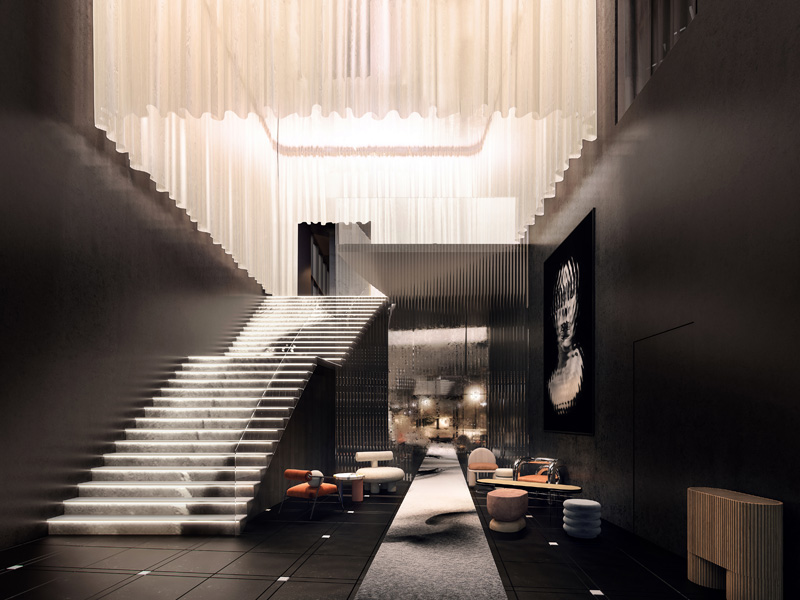 Part two of the hotel focus covers the Tribe hotel in Amsterdam, Hotel The Mitsui, Kyoto, and Wildes Chester

Due to open in summer 2021 is the 192-bedroom fourstar Tribe hotel in Amsterdam, located in the newly developed Gare-du-Nord project in Amsterdam-North, next to the city’s Noord metro station.

Operated by Accor under a franchise agreement with WIN Hotels, Tribe is one of the newest brands in Accor’s portfolio and focuses on creating a bespoke experience that ‘gives guests everything they need and nothing they don’t’. The concept aims to provide guests with a service that can, depending on their requirements, be primarily accommodation, collaborative workspace, decompression zone, social destination or gallery space.

As well as the new Tribe hotel, the agreement with WIN Hotels also includes a new 110-room four-star Mercure hotel in the same development, which is also due to open next summer. Thomas Dubaere, COO at Accor Northern Europe, says: ‘We have been committed to bringing Tribe to Amsterdam since Accor launched the brand last year.

Tribe is a new kind of hotel, a lifestyle hotel brand that promises to engage modern travellers and disrupt the market. Amsterdam is a perfect fit for the brand and we are delighted to be working with WIN Hotels to bring this design-led hotel experience to the Netherlands.’

The Gare du Nord project where both hotels will be located is being developed by AM and Blauwhoed. The project consists of two towers and is part of the development area surrounding the Amsterdam Metro North-South Line in Amsterdam-North. In addition to the two hotels, 361 residential apartments will also be built.
all.accor.com At the same time as celebrating an unprecedented sense of place and capturing a contemporary sense of luxury, architect André Fu says he hopes to bring a fresh, international perspective that would add something unexpected

For Hong Kong-based architect André Fu, this year has been one of dramatic changes to his intended schedule. His plans had included the publication of a new hardback book, Crossing Cultures with Design – an exploration of 18 of his key projects and an insight into his evolving design philosophy, while his lifestyle brand André Fu Living was due to unveil a major installation at the Palazzo Visconti in Milan, but with the cancellation of Salone, the collection, entitled Mid Century Rhythm, was launched through videography alongside digital platforms instead.

One project that continues uninterrupted is his latest work in the hospitality sector. Fu is currently working on the design of a brand new hotel – Hotel The Mitsui – nestled in the heart of Kyoto with a vision to ‘celebrate Japanese beauty, combining contemporary style with traditional Japanese heritage’.

Fu has been responsible for designing the guest rooms and public areas, as well as working closely with Japanese craftspeople and artists, from landscape designers to ceramic sculptors, to create installations and artworks for the hotel. Built on the site of the original residence of the Mitsui family of merchants and industrialists, Hotel The Mitsui will celebrate Japanese beauty in all its forms.

As the only non-Japanese designer working on the hotel, Fu is especially conscious of the need for authenticity.

‘I always feel a great sense of responsibility when taking on a new project, but it was especially so with the Hotel The Mitsui Kyoto, located as it is in front of Nijo Castle… a very important Unesco World Heritage site,’ he says.
afso.net  | hotelthemitsui.com The Rows – continuous half-timbered galleries accessed by stairs – form a gallery above street level along Chester’s Watergate, Northgate, Eastgate and Bridge Streets. The hotel property, on the corner of Bridge and Watergate streets, was originally developed in 1892 by architect Thomas M Lockwood and is made up of three town houses. Most recently it had been used as office space when The Wildes Hotel Group took over the lease, seeing the building’s potential and its key location.

Liverpool-based Edge Architects has been commissioned to extend the building to the rear, as well as creating a new roof terrace with plunge pool, with the proposals currently awaiting planning permission. The new layout of the black and white-fronted building, where the existing fabric is partly red-brick Victorian and partly Jacobean, will encompass 16 en suite bedrooms, each featuring a unique design. Free-standing furnishings in the bedrooms allow the original building to breathe, while quirky elements add character.

A new day-to-night destination bar and restaurant for both residents and non-residents is located on the hotel’s ground floor. The hospitality offer also includes an external terraced area, where non-residents can have a drink or bar snack, with the external banquettes heated in winter to ensure year-round appeal.

‘The new hotel will become a fantastic luxury destination for visitors to Chester,’ says SpaceInvader senior interior designer Izzy Eling. ‘It embodies a rich, sensual and flamboyantly decorated immersion in the heart of the city, with a design scheme inspired by a number of historical threads, coupled with contemporary services and styling.’

The interiors concept takes its initial influence from the site’s history, having originally been built for the Duke of Westminster as a base for his country pursuits, including horse racing and deer stalking. References to horse racing saddlery, from leather straps to diamond stitching details, are incorporated throughout.

The main stair at the rear has been finished in a bespoke carpet, with dark edging detail and an ornate banister. A seating arrangement, with velvet chairs immediately suggesting the scheme’s opulence, sits directly beneath the stair, while a door leading away from the reception takes visitors directly into the bar and restaurant.

Taking inspiration from Victorian powder rooms, the women’s toilets feature pink Victorian metro tiles and gold swan taps, while the men’s are in darker tones, with green tiling and black swan taps. Both are tied together through the use of wallpaper featuring giant fern leaves, referencing a plant that was particularly popular in Victorian times.

The second treatment features a richer and moodier colourway, with dark wall panelling and black rattan headboards. The windows and grand double beds are in ruby velvets, and the parquet flooring is layered with a large-scale floral rug. Each room type also has a feature coloured sink, marble wall panels and timber panelling, as well as free-standing baths engraved with the hotel’s branding.

The upper floor features a number of skylighted ‘stargazing rooms’, allowing guests to look up into the night sky, while one additionally features a mezzanine level, which is accessed by a spiral stair and leads up to a private cinema and bar. This space features green velvet reclining armchairs, gold lighting and burnt orange velvet curtains framing the screen, combining to deliver a cosy but luxurious cinematic experience.
spaceinvaderdesign.co.uk  | wildeschester.com