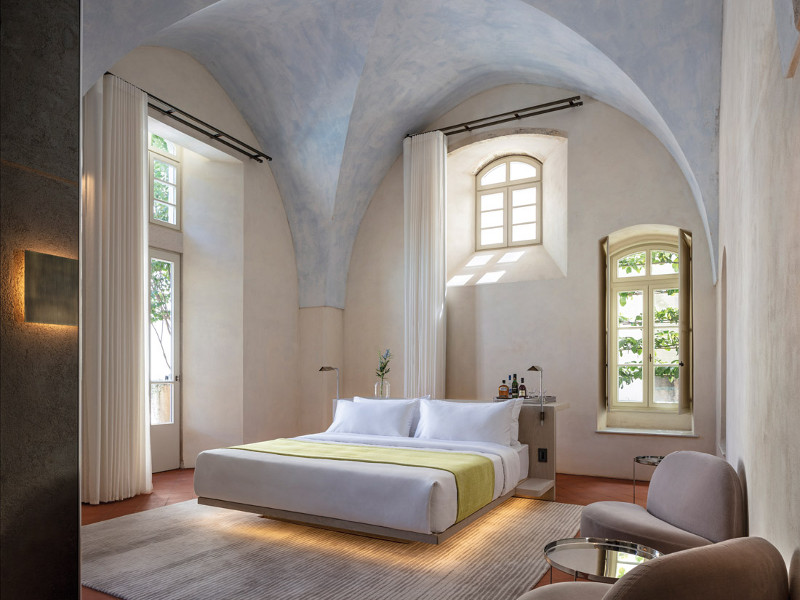 Creating a hotel with all the modern facilities that guests expect, yet within the constraints of a historic building, is a particularly interesting challenge, but here a few successful examples

While the architecture that wins prizes tends to be stunning new builds, the projects that can be the most interesting and challenging in terms of creativity and skill often involve the transformation of existing buildings – which in the case of hotels means trying to insert modern fire safety, acoustic separation, plumbing and HVAC into buildings that may have originally had none of the above.

Tommaso Ziffer, who has just redesigned the Hotel de la Ville in Rome for Rocco Forte Hotels, admits that working in an 18th century palazzo, turned into a hotel in the 1920s, was much harder than a new build: ‘The main difficulty when we were integrating modern technology into the historic space was the irregular layout of the hotel. In order to overcome the challenges presented by the unconventional dimensions and varying heights of the ceilings, we ended up turning the original 120 rooms into 104 rooms, which ultimately gave us more flexibility with the spaces, especially when it came to adapting them for modern customers.’ The same factors were at work in the process of regenerating the Château de Montcaud in the south of France, built in 1848 as a private residence, first converted into a hotel in 1992, and completely refurbished last year. Interior designer Iria Degen notes: ‘The challenge was – as often in historic buildings – that every room appeared to be different in layout and size; there were no ‘room types’ exactly the same. Also, in terms of décor, some rooms had unique painted ceilings, while others had historical built-in elements. We had to look at each room case by case.’ Tess Wicksteed, strategy partner at Here Design, created the brand identity for the refurbished 19th century coaching inn the Fife Arms at Braemar, near Balmoral in the Cairngorms, which reopened in December. ‘Old hotel rooms are weird shapes and people are not terribly used to that; we are used to big box-shaped rooms,’ she says. ‘The rooms there have sloping ceilings, so they decided to build on the eccentricity and create it as a benefit, so they are all completely different and individualised room by room, meaning there’s something to come back to and a sense of discovery. Authentic beams then become one of the attractions, not something to worry about.’

‘It is definitely more challenging creating a hotel within an already established space,’ says Ziffer, ‘most notably with regards to the interior layout. When building a hotel from scratch you never end up with more than a few different structural schemes for the bedrooms. ‘However, when it comes to adapting a historic building, every single room is completely different to the next, meaning there is very little regularity. In the case of Hotel de la Ville, therefore, we ended up designing the rooms on an individual basis.’

The problems are even more acute when the hotel is being developed in a building that has not previously been used for hospitality. James Parkin, associate director at Lifschutz Davidson Sandilands, was lead architect for the creation of brand new The Moorgate hotel in London, which took shape in four Grade II listed townhouses, with shop units on the ground floor, and an even older, unlisted retail and office building at the rear, facing the London Wall.

‘Our main challenge was to consolidate the circulation between these two fundamentally different buildings with different floor levels, so nothing really aligned,’ explains Parkin. ‘The device we used to connect the disparate buildings was a spiral staircase for circulation, to connect all the different floor levels. It’s slightly asymmetric, with roof lights, so it acted as a light-filled space within the building. There are no downlights; instead, we illuminated from the floor so as you look up through the space the ceilings and walls are washed with light and appear as a sculptural space and a breathing space from the bustle of the London Wall.’

Parkin also grappled with the question of how to knit together the old and the new: ‘Most of the heritage features, such as the dados and cornicing, had been lost, but there were quite a few original fireplaces, and all the original windows, which were quite tall, and generous sash windows with shutters, so we restored and refurbished all of those. As we had created the new circulation space at the back, we defined a point in the building where old turned into new, but the contemporary elements were designed to respect the older ones, with the materials and palette carried through.’ So, for example, there are dark, stained walnut floors throughout, but laid in a traditional herringbone in the period parts and a modern brick set design in the contemporary areas. ‘It’s the same flooring, but with a little twist in the detailing,’ says Parkin.

Where historic features are retained, it may not always be straightforward, Parkin warns: ‘Some of the floors were sloping and we needed to get modern fire and acoustic separation, so we ending up removing all the skirting boards, cornicing and period features, levelled up the floors and put in new acoustic and fire separation. We refitted the flooring, which had to be raised by 50mm, so we had to lift and reinstate all the fireplaces. People might think it’s a careful restoration, but it was much, much more.

‘The conservation ideal can be at odds with the reality – with the stucco facades, the listed buildings people told us they wanted a light touch in terms of repair and period finish paint. The reality was it had been bashed about so much that most of it was contemporary and had been painted with modern paint. We ended up taking most of the stucco off and building period replicas painted with breathable paints.’ Château De Montcaud in the south of France, which dates back to 1848, has 29 bedrooms and suites, with tall ceilings and views of the garden, along with a decorative silk panel above the bed in honour of Alexandre Eugène Collain, a wealthy silk trader who originally had the chateau built. Every room was different, and many had unique painted ceilings that needed to be preserved

There’s often a delicate path to tread, says Wicksteed: ‘Lots of heritage hotels create a Disneyfied version of history that’s all hyperbole – they claim to engage with a place, but often do it in a very light way.’ Here Design aimed for authenticity by working with the Braemar Historical Society and digging deep into the archives. ‘It was a dream project,’ says Wicksteed. ‘We made sure that every detail was authentic, and worked with local craftsmen and the community. The food is local, staff are local with roots in the area, and the bar is incredibly affordable so locals can drink there. It’s flamboyant and creative, but it’s not exaggerated or a pastiche.’

At the Montcaud, which also aims for historical integrity, Degen notes: ‘We valued the historic context and quality while adding the new with respect to the past. In such a project it is important to stay humble because one could easily do too much. The chateau just needed to be awakened with the necessary comfort that guests of today are appreciating.’ For others, the dissonance of a purely contemporary interior inside a deeply historic shell provides the main attraction. The B&B Italia Group completed the stunning new hotel The Jaffa for the Marriott Group in Tel Aviv last year. The hotel was created by British architect John Pawson from a 12th century stone convent and a 19th century hospital. The contrast of modern furniture and bathrooms from B&B Italia with ancient stone walls and frescoes creates something iconic.

The Hoxton Paris hotel was created by architecture and design team Humbert & Poyet from a former fabric factory. ‘It was in an unsalvageable state when it was acquired. The only thing we were able to preserve were the facades and the staircase that leads up to the Jack bar,’ explain Christophe Poyet and Emil Humbert. ‘We adapted the design to fit the historical building by maintaining the classic proportions and contrasting with industrial elements.’ With semi-transparent bathroom spaces and a mid-century modern vibe to the furniture, the team has created a design that is almost timeless. ‘Designing a hotel with modern standards within a historic building is inspirational,’ they enthuse. ‘Its existing history provides context and substance; it is a welcomed and enjoyable challenge.’