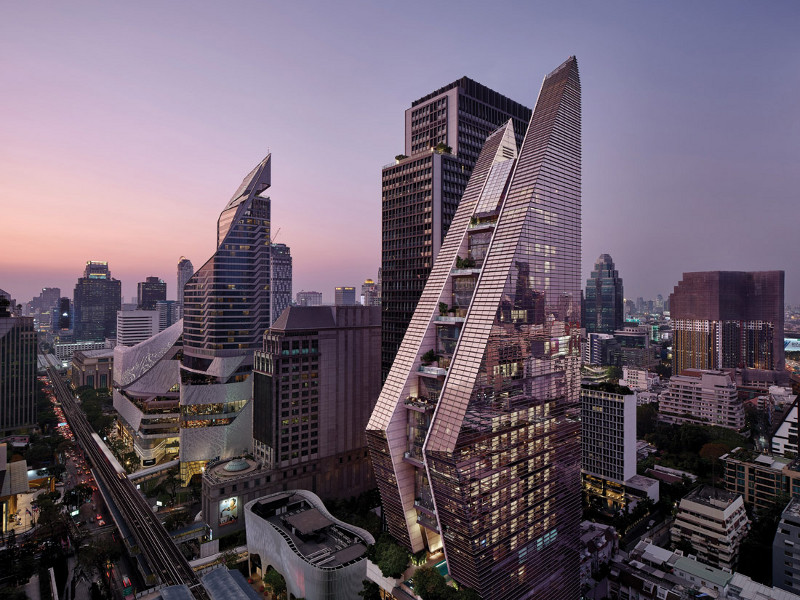 It’s a disappointing experience to travel halfway across the world and find yourself in a bland, international hotel that could be anywhere, but travellers who book into one of Rosewood Bangkok’s 159 rooms and suites will not have to worry about waking up and not knowing where they are, since everything in the new hotel has been designed to capture the spirit of Thailand.

The 27th hotel to be part of the international Rosewood brand, the new five-star Bangkok landmark is owned by Rende Ploenchit Hotel Company in Thailand, which is run by two sisters. Many of their early memories and their favourite things about their culture have inspired the interior design by Celia Chu, principal of Taiwan-based Celia Chu Design. The swimming pool, tucked between the two sections of the building

‘The owners of the hotel are a famous family in Thailand, and my aim was to create a place to celebrate and share their love and memories of Thailand and Thai culture and show something of their family life,’ says Chu. ‘Going through the hotel is like reading a novel: each chapter is talking about something different.’

The idea of rooting the hotel in Thai culture began with the very shape of the 30-storey tower, which was designed by New York architecture firm KDF (Kohn Pederson Fox) with Tandem Architects as executive architect. The striking contemporary form, which is comprised of two connected structures, recreates in steel and glass the classical Thai greeting, the wai, where the palms are placed together in a prayer position. The new asymmetrical landmark is set in an area of Bangkok that is filled with embassies, offices and upscale shopping malls, and is intended to attract both business and leisure visitors. The modern sculpture by artist Jiandyin also represents the wai

‘The design of the building itself is the hand gesture of greeting known as the wai and I carried the theme from the architecture into the interior design, from the big picture right down to the smallest detail,’ says Chu. ‘I was trying to create a hotel with a residential feeling, that is about culture and local flavour.’ The process starts at the very first step on the journey – the drop-off area, which has been designed with a private driveway to begin the separation process of taking people from the bustling, narrow streets of the city into the calm of the hotel, presenting initially on an almost domestic scale to fortify the idea of being in a private home. This first glimpse also cements the idea that this is a building where the contemporary and the classical co-exist in harmony. What looks at first glance like dark, hardwood panelling and sculpted wood turning at the entrance doors is actually tinted stainless steel, while the modern piece of sculpture that is seen through the doors is ancient Thai calligraphy representing the word ‘wai’, designed by artist Jiandyin. The screens in the Lakorn brasserie call to mind a musical box the owners were given in childhood, while the screens are made from representations of the metal finger nail extensions worn by traditional Thai dancers

Moving into the drop-off area, the panelling here is wood, but the traditional moulding panels are in a variety of different sizes and configurations. ‘It’s something classic that can become something modern and fun,’ says Chu, who also chose the patterned marble floor because she wanted something ‘strongly graphic’ to make an impact.

The natural second stop for visitors is the Sky Lobby on level seven, which is a relaxing multi-functional space that backs onto the main reception area. ‘The design was inspired by the owners’ family history of collecting art,’ says Chu. Indeed, it seems that every aspect of the room is a work of art in itself – the wall panels, for example, are made with ‘scales’ of glass overlaid with gold leaf. ‘They are the same shape as the roof tiles of the [city’s] Grand Palace, which I love, but I wanted to transform them in an architectural way so that people would take more notice of them,’ says Chu. The incredible bespoke glass chandelier is made in the shape of Thai dancing fans, inspired by the traditional skill that the sisters learned as young girls.

The neighbouring reception has contemporary art from local artists alongside a reception desk that has been a labour of love. Chu found one original antique, handcarved wooden panel, then commissioned the other three panels to match. ‘It took years to prepare and weather them,’ she admits. The rooms have pierced screens typical of Thai architecture

One of the most striking of the public rooms is the Lakorn, a living room used for breakfast or afternoon tea. The curved panels that create an intimate seating zone within the larger space are a stylised interpretation of the floral pattern on an antique musical box that was brought as a gift from the travels of the owners’ parents. And a closer look at the metallic mesh window screening reveals another iconic Thai motif – the screen is made from the fake nails worn by traditional Thai dancers. ‘It’s the combination of something very traditional and very open – like Bangkok itself,’ says Chu.

The traditional arts also inspire Chu’s design for the Pavilion banqueting space on level five: ‘This chapter of the book is about celebration and dancing at weddings, and I captured the movement of the dancing in the curving shape of the chandeliers and the swirl of the carpet.’ And it is Thai martial arts that were behind the design used in the fitness centre: ‘Thai boxing is world famous and I used the design of the traditional wrapping on the boxers’ hands as a design element on the walls.’

In the bedrooms and suites the Thai motifs are more subtle, blending in with a slightly more European look, but the location is still referenced in the pierced screening that separates the living areas from the beds and in the bathroom tiles, which have the same pattern as those in the Grand Palace, but executed in brown rather than gold. The Green & Organic cafe has biophilic elements, including the textural bespoke lighting feature in the shape of drying herbs

Chu admits that finding a design theme for the spa was a challenge: ‘Thai spas are world famous, most are either very modern and very white, or completely traditional, so I wondered what we should do next. In Thailand we have all these caves with lovely cool temperatures, so I decided to design the space like cave walls. We hired an artist to shape and paint the plaster walls so they looked like they had been carved by years in the elements.’

Part of the Rosewood brand identity is its concept of each hotel having a unique sense of place, and Rosewood Bangkok has successfully expanded the company’s horizons with a truly Thai identity.