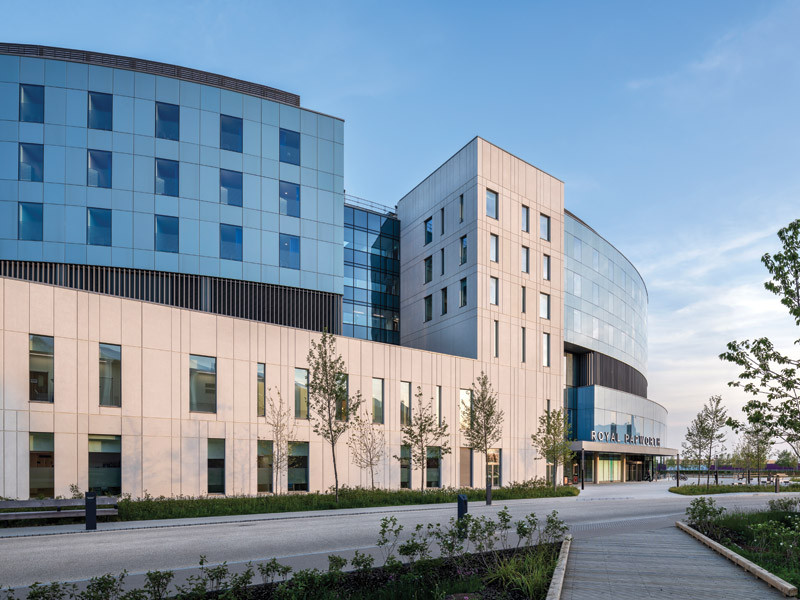 HOK’s approach to creating this landmark hospital in Cambridge was both highly specialist and holistic, building on the ethos of Papworth's founding in 1918

Of all the things that go into designing a specialist hospital, a pond doesn’t seem a priority. But it was for Cambridge’s Royal Papworth Hospital as it moved to a new site. As Kirstin Ziemer, senior medical planner at lead architect HOK, explains: ‘One of the centrepieces of the old site was the pond, and they used to say once a patient could walk around the pond, they were ready to go home.’ This simple ritual seems in keeping with the principles Papworth was built on. Set up by Dr Pendrill Varrier-Jones in 1918 for tuberculosis patients, the Papworth village settlement was to be a place to recover away from London. Instead of isolating patients until healthy, here they could be rehabilitated into normal life alongside their families, learning to craft luggage and luxury goods to be sold at Harrods – and so gaining more than their health back by the time they left. This arts and crafts ideology was certainly radical at the time, and with the new hospital HOK has also been pushing the boundaries of healthcare design. The pond, though, remained at Papworth’s heart. As Ziemer remarks: ‘We weren’t told it would have to have a pond, but you couldn’t possibly conceive of a design that didn’t have a pond in the landscape … I think at the competitive stage all of the bidders included one.’

Ian Fleetwood noted that just as the pond draws in those in need of time and space, the hospital is a focal point of the Cambridge Biomedical Campus

Beyond the pond, Papworth has long been exceptional yet lacking in the facilities it needed. Remaining on the same site for 100 years in a manor house – or ‘a rabbit-warren’ and an ‘ad hoc series of buildings,’ as HOK describes it – it has nonetheless been home to some of the greatest advancements in cardiothoracic medicine: the UK’s first successful heart transplant in 1979, the world’s first heart, lung and liver transplant in 1986, and it is still the only place in the UK for certain specialist procedures. The complexity of the project required collaboration between architect, client and specialist consultants. All involved were experts in their fields, but HOK had to push the conversations further; the role of a medical planner, Ziemer says, ‘is to challenge how [clinicians] do things ... they talk to you about what they do, and you have to say to them “well actually, that’s one way of doing it, but if you wanted to think really outside the box, what are the possibilities?”’

Considering the project has been running for almost a decade, the designers had to anticipate future medical advancements. HOK worked with the latest tools, collaborating with Reading University to use its VR facilities long before VR became the standard tool it is today. This allowed Papworth’s medical professionals to walk through an operating theatre, and to test out and fine-tune HOK’s design at an early stage. With the corridors there are no long stretches and dead ends, but a slow curving progression. Image credit: Chris Ansell.

The building’s massing consists of an orthogonal stone precast element that relates to the neighbouring Addenbrooke’s Hospital. It contains the floors with the outpatient wards and the ‘hot floor’ (a space for emergency procedures), whereas a much lighter elliptical glass structure above houses the inpatient wards. The change in materiality was important: ‘Rather than that being a heavy, stoic material, it’s a kind of glass, reflective material … that reflects its landscape around it, and acts as a kind of beacon for the NHS,’ lead designer Ian Fleetwood explains. The feeling is shared: consultant medical surgeon Steven Tsui calls Papworth ‘the guiding light of the NHS’. HOK designed the layout to be as simple as possible, with landscaped paths and clearly visible entrances. Once inside, a central atrium acts as a ‘one-stop-shop’, says Ziemer – from here all the departments and facilities can easily be accessed. The inpatient floor is split into two wards that can be split further into four in case of an infectious outbreak – a particular risk to Papworth’s vulnerable cystic fibrosis patients. Most rooms are singles, which is proven to be better for patient recovery, and are all identically laid out to reduce mistakes as hospitals often employ locum staff who will not be familiar with the site. Observation is a huge priority for the vulnerable patients Papworth cares for, so the corridor-facing walls of the rooms are glass (with an artwork over a horizontal section to afford a little privacy). Most rooms are singles and are laid out identically to reduce mistakes made by locum staff who will not be familiar with the hospital. Image credit: Chris Ansell.

The rooms are adaptable and multifunctional: inpatient rooms can host emergency procedures, and the specialist facilities of operating theatres and catheter laboratories can both be converted from one to the other depending on which approach will become more important to cardiothoracic medicine. The hospital also has the potential to expand by 11,000 sq m, by using infill areas and the relocation of office space – by far the cheapest part of the building. To improve the efficiency of the office space, HOK swapped private offices for clusters of desks. There was some concern about delivering private space for speaking with patients, but HOK had the confidence that it could be provided by soundproofed booths, following previous experience with other high-stakes environments, such as the Ministry of Defence offices. The use of virtual reality gave Papworth’s medical professionals the chance to fine-tune HOK’s design at an early stage. Image credit: Chris Ansell.

The environment is greatly improved for staff as well as patients. One nurse commented that whereas in the old Papworth she worked with no windows, now she – as well as the patients she cares for – can enjoy the landscaped surrounds through floor-to-ceiling glazing. No wonder Papworth has the unheard-of situation of having a waiting list for clinical staff.