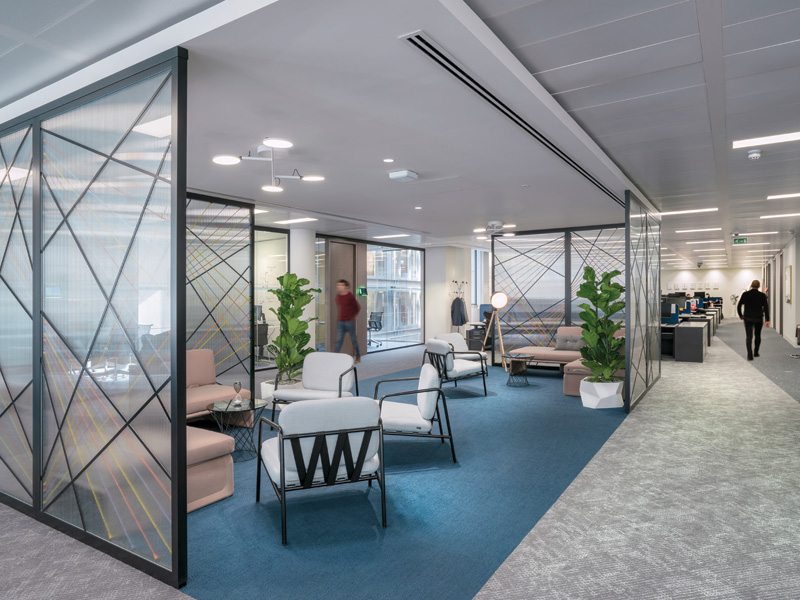 Open text’s new London office, situated in the City of London’s Cannon Street, is the eighth of the company’s HQs designed by architecture practice HOK. OpenText is a Canadian-founded AI and analytics company whose offices have a global spread; half of these are located across North America, and roughly a third across EMEA. Whereas the global commission is ongoing, with 25 projects delivered worldwide since 2011, this is the third European office delivered by project lead Anouschka Walker.

There is continuity between the workplaces HOK has designed for each location, but the architects have endeavoured to allow each project its own identity, whether influenced by the culture of the host city, or by the employees’ specific needs. In 2011, HOK established design principles for the OpenText workplaces with the idea of growth in mind: it produced a ‘kit of parts’ that can be used in various ways, allowing the offices to develop in pace with the growing company. The design is not prescriptive in terms of finishing, which is individualised each time and can make use of local suppliers, but instead integrates an ethos into the design of the designed modules: through the type of spaces they create and the workplace interaction that these spaces encourage. Lighting is by Sattler in this breakout space

For the design of the London HQ a keyword was collision: the company itself has grown through a series of corporate acquisitions in which disparate groups have come together, changing headcount at short notice, and consequently changing the demands on the workspace. In London’s case it was the integration of four companies. Embracing these converging forces HOK brought the companies together for ‘visioning sessions’ at the beginning of the design process.

Discussion allowed the design to be approached from all angles and from all involved: the future occupants of the London HQ shared their business processes, the past successes and mistakes of previous offices, combined with their goals and visions for what this new space might look like. The process invited collaboration: using visual cues ensured design ideas were not left conceptual, but became tangible for all involved. The resulting offices created from the CAT A space could thus be tailored to foster the workplace interaction OpenText desired. Two wings of the overall layout are filled with banks of individual desks, but connecting these, rather than long straight corridors, are intermediary areas punctuated with different kinds of meeting rooms, and collaboration spaces where staff might ‘collide’. To the rear of the first floor is the core of the two-storey workplace, consisting of a ‘town hall space,’a ‘scrum space,’ and a high spec AV-equipped area for all employees to use. Different areas of the office offer different facilities and atmospheres to lure workers from their individual desk space: one popular example is a meeting room dubbed the Jewel Room. Designed as a space with ‘many facets’, it is a meeting room on the inside, but its external walls are equipped with media facilities – thus attracting collaborative work both outside and in. Elsewhere, two-to-four seater private pods are used for informal meetings. The draw of these top-spec facilities is meant to invite those from even beyond the London HQ: in its desirable London location, OpenText envisions these spaces as destinations for its international staff and clients.

As is typical of open-plan spaces, opportunities for privacy are of great importance to the design. Yet these do not contradict the overall idea: a number of discrete meeting pods have transparent walls, and even in the most social of spaces, where employees might enjoy lunch together or play a game of table football, soundproofing panels have a pattern of articulated inserts that can be moved in and out of an otherwise flat surface – encouraging interaction with a design feature as playful as it is functional. Further elements of the design echo the idea of collision, and of the unexpected and exciting interactions this might produce. Transitions between spaces can surprise; visually, carpet patterns are angled and offset in relation to walls, and strip lighting is positioned at divergent angles. Graphic and colourful artwork reinforces the theme, but also brings a local flavour to the overall aesthetic, including work by Peckham-based artists Remi Rough and Katrina Russell-Adams, and English artists Sophie Smallhorn and Faye Dobinson. The workplace designed by HOK is well suited for OpenText’s current and future needs, but it also articulates its ongoing need for connection as the company continues to grow. While this global AI company and its workers are free from the material ties that cloud technology provides, the design visually reinstates lines between all the individuals integrated into OpenText’s London HQ. In a move that feels almost nostalgic, colourful connective cabling that is no longer needed is instead used as a decorative element: across the glass that frames a central collaboration area, an eye-catching pattern is made from the crossing cables.