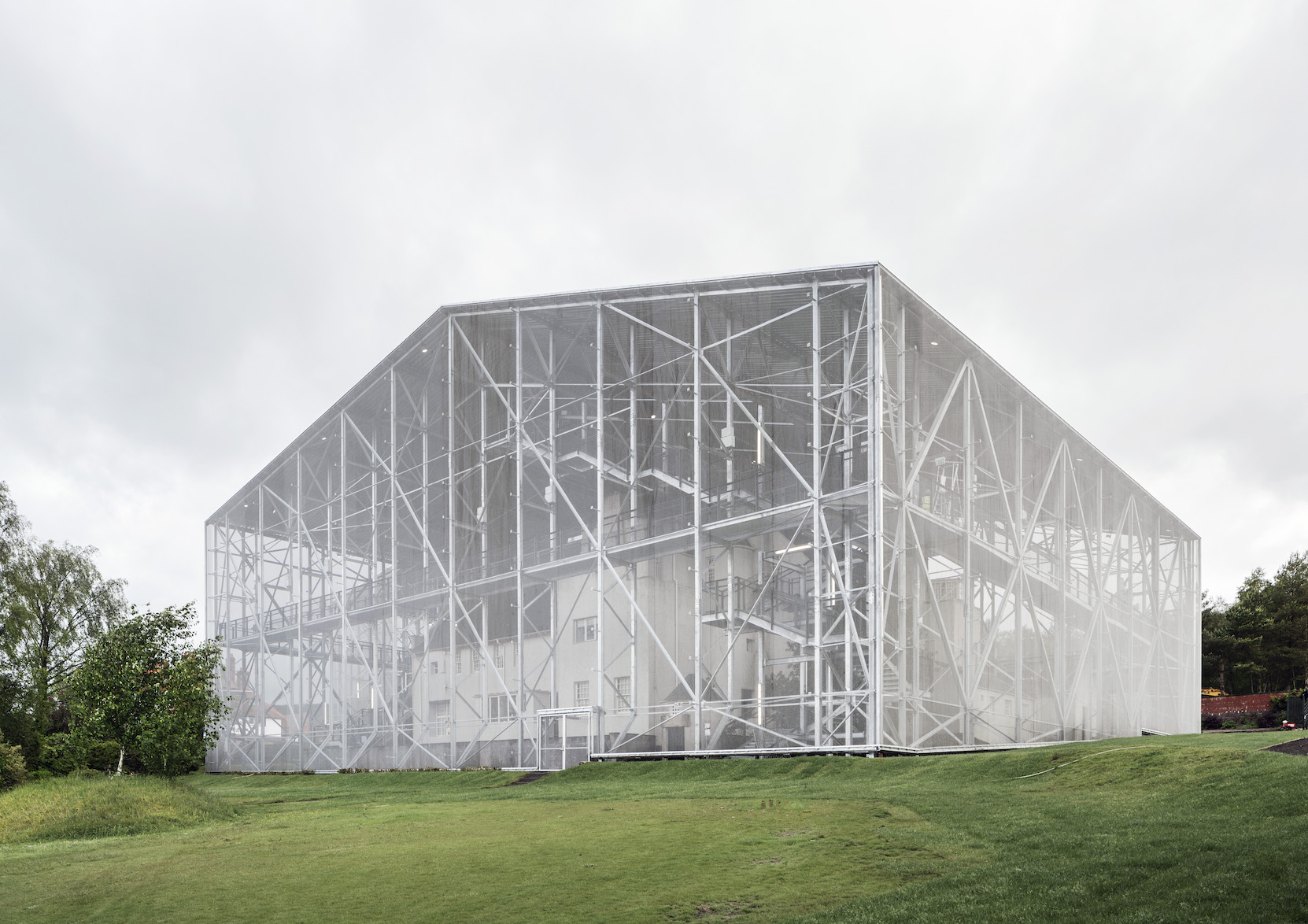 ‘You can’t conserve buildings in the 21st century with timidity,’ states Richard Williams, the regional manager of National Trust for Scotland (NTS). We are standing over a model of Carmody Groarke’s response to a brief for a structure to allow remedial works to one of Charles Rennie Mackintosh’s canonical works: the Hill House (1902–4) in Helensburgh, western Scotland. With a £3.7m construction cost, the Hill House Box project was completed after only six months on site and was funded by grants from NTS and a fundraising campaign. Opened in June, it will stay in position for approximately 15 years while NTS considers the best approach to conservation and delivers the remedial works.

Charles Rennie Mackintosh (1868–1928), Scotland’s legendary architect whose buildings often challenged the vernacular and expressed diverse influences, was commissioned in 1902 by the publisher Walter Blackie to design a home for him and his family overlooking the Firth of Clyde. The house was designed with the function foremost; split into three discernable volumes, the building consists of a sequence of rooms tied to the social patterns of the Blackie family. In his brief, Blackie stated that ‘any architectural effect sought should be secured by the massing of the parts rather than by adventitious ornament’ — leading to harling (rough-cast lime and aggregate) being used to cover the outer walls of the house. The result is undeniably different to its neighbours: it has a uniform white skin that appears cast around the building, repudiating traditional details and the vernacular sandstone in order to accentuate the mass, similar to the sobriety of line in his sketches that betrays the intertwined functions within the structure. This experimental approach to materials as well as the focus around the social patterns of the Blackie family caused the Hill House to become highly influential in Europe and in turn a precursor to the modernist style. Unfortunately, the materials have also necessitated the rescue mission initiated by the current owners, NTS. The harling used then-new Portland Cement which, unlike the vernacular lime render, is not breathable. As such, the waterproof outer layer developed cracks and water was soon drawn up by hygroscopic action into the sandstone structure of the building.

Carmody Groarke’s response to the issue is affectionately known as the ‘Hill House Box’ and takes the form of a semi-permanent structure that eruditely weaves around the existing building completely enveloping the house, whilst maintaining visual contact with the outside world. Described as a ‘field hospital’ by Carmody Groarke co-founder Andy Groarke, the aim of the box is simple: to shelter the Hill House from rain whilst also allowing enough humidity to circulate during the conservation work. It seems obvious to cite Mackintosh from 1893 — ‘clothe our modern ideas in modern dress’ — but here Carmody Groarke has provided a pragmatic response to NTS’ competition brief. ‘This was not a design crutch for Mackintosh in the style of Mackintosh,’ explains Groarke. ‘It has to first and foremost do a job. Every design decision was under budget scrutiny.’ Maintaining a visual connection to the house from outside the box was a crucial element of the brief. Credit: Johan Dehlin

The resulting scheme can be condensed succinctly into three main built elements: the frame, the elevated walkways and the visitor centre. The fi rst element, the structural frame, consists of 165 tonnes of steel members and spans up to 31.5m across the house terminating in foundations that minimise the impact on the landscape. At points sitting only 5m from the existing house, the structure has been designed closely with engineers Price and Myers to work as efficiently as possible and is unashamedly utilitarian — both to preserve the views and to work to a tight budget. The joints are bolted to avoid any hot works on site, since planning was submitted soon after the 2014 Glasgow School of Art fire. Carmody Groarke has used the largest stainless steel chainmail in the world for the box structure to enable translucency and air flow. Credit: Johan Dehlin

Since a traditional scaffolding clad in plastic would have both obscured views and stopped the structure breathing, Carmody Groarke chose to clad the house using the largest stainless steel chainmail in the world. ‘It’s like a fabric — you can sew it on site,’ says Groarke, showing me where the 1cm-diameter chainmail has been pinned back to the primary structure. It is a clever solution — the breathable structure allows the house to dry out but the chainmail also acts as a rain screen, keeping out the majority of water (as demonstrated by the downpour on the day of my visit). The metal screen also allows the house to remain visible. According to Groarke, ‘the visibility of the Hill House was essential from the outset — so you can see her and she could see you.’ It is maintaining this visual connection that will perpetuate the house in the collective memory rather than being hidden behind scaff olding for up to 15 years.

The elevated walkways form the second element; distilled from Carmody Groarke’s earlier Skywalk project (2008), a series of routes climbs 15m above the house, allowing visitors to literally gain a new perspective on the building and giving the appearance of a maquette. ‘Rather than exiling the house, we wanted to put people in touch with those processes so that they can start a discourse about what we do with our built heritage,’ says Williams, underlining the fact that his conservation plan has larger goals than the preservation of the Hill House. The introduction of this element of spectacle aims to attract a new type of visitor. ‘Could I convince my children to visit a Mackintosh building?’ postulates Groarke. ‘Reluctantly. Could I ask them to climb a walkway 50ft in the air? More likely.’ Not just a protective box, the structure includes a series of raised walkways for visitors to see the house from a new perspective. Credit: Johan Dehlin

The visitor centre makes up Carmody Groarke’s third intervention on the site. Groarke describes the structure as markedly diff erent, ‘because we didn’t set out to build a “Mockingtosh” building — this is a 21st-century visitor centre’. Built using CLT and placed within the perimeter of the steel frame box, it forms part of the experience but is expressly separate from Mackintosh’s scheme. Internally, views from the cafe and shop towards critical elements of the house are framed — the architrave above the front door, or a piece of ongoing restoration work. A lift core allows at least partial access to the scheme, reflecting a new approach to accessibility in the context of heritage visits. The response is at once bold yet sensitive to the building; Carmody Groarke clearly has a thorough understanding of Mackintosh’s original concept of the Hill House where all scales were considered — from the landscape to the furniture. ‘There’s more than just the house to understand,’ says Groarke, ‘there’s the context — it’s architecture and landscape in symbiosis.’ It was also clear that the concept of enclosing the house was readily accepted by the local planning authority: ‘The discussion was always about the language of the box,’ says Groarke, referring to the chainmail cladding. From within the box at a distance it is nearly imperceptible, allowing a full view of the Firth of Clyde as well as the Mackintosh-designed landscape. However, as you approach the perimeter of the steel frame, the focal plane adjusts to the metal skin and your attention is drawn back to the house within the envelope. This clever use of materials controls what the viewer sees, and passively directs attention back towards the house.

The predominant success of this project is that it marks itself as distinct from the language of the Hill House. ‘I wanted it to be of a quality that it could sit next to Mackintosh and do Mackintosh justice, but we are not building a Mackintosh building,’ explains Williams as we ascend the walkways. ‘Tectonically the box is a completely different thing to Mackintosh’s load-bearing structure; the porous cladding allows the steel frame to become apparent as the primary structure,’ Groarke explains, as we look down through a skylight into the house. ‘We wanted the box to feel quasi-industrial — we’re not trying to hide what we’re doing here,’ explains Williams, reflecting a bold attitude that challenges the traditional approach to conservation. At the same time, elements of Mackintosh’s stylistic language have been applied to the box: the appreciation of the expression of a simple, almost primitive, approach to the mass of the new structure is apparent. ‘There were certain spatial experiences that inspired us, such as the counterchange between light and dark,’ says Groarke. He is referring to the manner in which the Hill House uses contrast as an important tool to differentiate the roles of spaces, for instance the transition between the hall and living area. Acting as a buffer space between the inside and outside of the box, the low ceiling and dark, broody interior of the visitor centre give a reprieve as you come out into the box which is neither inside nor outside; the chainmail gives a refined quality to the light.

Time inherently plays a key role in the project, and whereas before, some Carmody Groarke projects have made tangible a sense of the impression of time (inherently in the 7 July memorial, and materially in the changing facade of the Windermere Jetty Museum), the box looks to stop the clock, allowing for an informed decision regarding conservation to be made, as well as enabling the house to dry out before any works can take place. Now the box has been built, decisions over how to restore the house have to be made. Credit: Johan Dehlin

The relationship in close proximity to such a canonical building has leant a certain reticence to the form of the box, but what it lacks in architectural expression it makes up for in ambition for a new approach towards conservation. The advantages are clear: the building remains visible — in some ways more visible than before; it is protected; the scheme is entirely reversible, and the conservation process is opened up to the public. ‘I certainly want some sort of public conversation,’ says Williams, referring to the choices that will have to be made about whether to restore the house true to the original or whether to change the details to avoid the same issues in the future. The project reflects Williams’ and the NTS’ views of the future of conservation: ‘This is a model that can be brought forward,’ says Williams, ‘it’s an evolution within conservation. A big problem requires a big solution.’

In the context of such an important building, Carmody Groarke realised that the answer is not always an architecturally formal structure, but a pragmatic response — and one that raises many questions regarding our approach to conservation. This radical scheme may be a tangible sign of change towards our approach to how we treat our built heritage. The outcome is a reminder of the importance of co-design between client and consultants — and thus a questioning of the role of the architect today. The Box knows its place as a temporary tool in the conservator’s toolbox, but the impact that this concept of conservation has made will remain around for the foreseeable future.

From its innovative materiality to the manner in which it challenges conventions, Mackintosh may well have enjoyed this scheme. ‘The thing that would annoy him most,’ says Williams, ‘is that he didn’t build it.’

This article was origially published in Blueprint issue 365. Buy a copy here, or subscribe to Blueprint