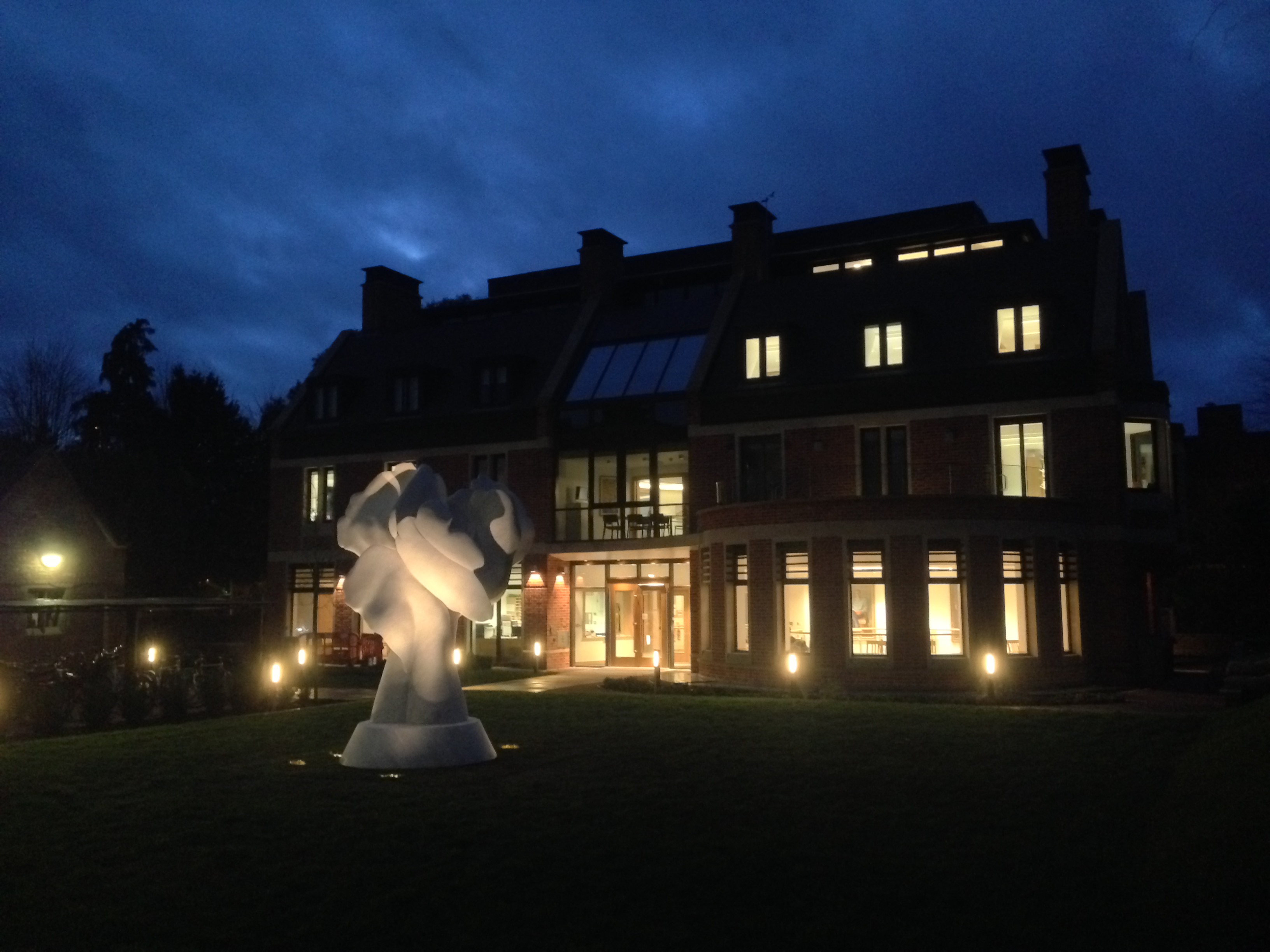 A new, monumental sculpture by acclaimed sculptor Helaine Blumenfeld has been unveiled at the Woolf Institute, Cambridge. Ahead of the launch, DesignCurial spoke to Helaine to find out more about her work.

Having created more than 90 sculptures – including ‘Fortuna’ in Jubilee Park at Canary Wharf and ‘Flame’ at Clare Hill in Cambridge – Helaine is an internationally-acclaimed sculptor who has worked extensively in the public sphere. Ahead of the launch of this latest commission, DesignCurial were lucky enough to be offered the chance to speak to Helaine to discuss her sculptures, her inspiration, and why working with the Woolf Institute has been so special.

Conversation begins with where the inspiration for her marvellous, abstract pieces comes from. “I think,” Helaine muses, “for a long time it came from my psyche and how I felt about things. I was really exploring more personal feelings. For a very long time I was drawing on extremely personal experiences - but recently, although my work is still very personal, I am very, very concerned by the state of the world.”

“So my [new] inspiration is really looking at the condition of the world and the chaos. I do believe that art can make a difference and more and more I see that it does.” It is beauty, Helaine explains, that really “consumes and concerns” her – “I am inspired by a desire to create beauty and I think beauty is helping and healing.”

Helaine reveals that she has always known she was an artist, but at the beginning she thought her medium was words and language. However, “the more words I had the less I was able to express anything… I realised I needed something that was an extraordinary language, but I didn’t know what that was”. She came upon sculpture as an art form almost entirely by accident, during a visit to the National Gallery in Naples.

“We can across these little terracotta pieces and I was just astounded how these tiny things told a story; and I said, ‘You know what? I want to do that. I want to do sculpture’ - and I’ve never looked back from that”. Though her sculptures are often giant pieces of public art, Helaine explains that they always start much smaller, with a much more malleable material in comparison to marble or bronze: clay.

“I go straight to clay,” Helaine announces firmly, “and I can work through the night – for days even – if I’m really inspired.” Eventually, a form will take shape and express what Helaine is feeling and thinking; or, just as easily, it won’t. “I think that’s the most important aspect,” she says, “that critical judgement, that standing back from what you’ve done [and knowing whether or not it’s worked]. It’s completely intuitive.” Splitting her time between two studios, Helaine spends half of her time in Pietrasanta, Italy, and the other half at home in Grantchester, near Cambridge. It is therefore no surprise that she has had several public commissions from the city and University colleges; this brings the conversation around to whether Cambridge - which is also the home of the Woolf Institute - holds something special for her.

“I would prefer to do [scultpures] here over somewhere I don’t live,” Helaine laughs - although she has exhibited her work extensively in the UK, Europe and the United States. Part of the reason for having so many pieces in Cambridge, Helaine thinks, is “because I’m very well known here and the work has become sort of landmark. That’s something I believe very strongly about sculpture in public places: getting it in the street and having it define a space.”

“If you’re talking about putting beauty in the world,” she continues, “you’re not talking about putting it in someone’s home where no one else is going to see it. I feel, more and more, that I have an ambition to put work into public space and in the world, so that people can discuss it and bring their own perspectives because people see things so differently. I think beauty takes you out of yourself in that moment and you’re in a place where you see things differently”. Her latest monumental sculpture, created for the Woolf Institute, is called ‘Tree of Life: Encounter’ and was created out of a block of marble from the famous quarries in Carrera, Italy – the same marble used by Michelangelo for his sculptures. When asked why marble was chosen for this latest piece of artwork, Helaine admits that, as it was commissioned by the Woolf Institute, they were the ones to choose the material.

“They chose the model but spent a long time deciding whether it should be marble or bronze,” Helaine explains. The model for the sculpture was, as the title suggests, “a tree of life. It begins with three parts of the trunk that are separate; in a sense this represents the three branches that [the Woolf Institute are] trying to bring together: Judaism, Christianity and Islam. Then, as it goes up, [the sculpture] opens up, with many leaves and branches reaching out to suggest hope, new possibilities and spiritual regeneration.”

It seems that Helaine agrees with the Woolf Institute’s choice to use marble to bring her sculpture to life. “Marble offers a real purity,” she says. “You can really feel something quite spiritual about the material; there’s something so timeless, hopeful and eternal about marble – especially white marble - and it just gleams! When it rains, you can see the veins in [the marble], which is incredibly beautiful. It takes a life of its own and it’s so special.” The official unveiling of ‘Tree of Life: Encounter’ at the Woolf Institute also marked the final day of filming for a new documentary film by Sky Arts that focuses on Helaine’s life and work, titled Hard Beauty. The film follows the creation and development of this latest commission from its very beginnings – when the new Woolf Institute headquarters was just a building site.

Established in 1998 and with strong links to the University of Cambridge, the Woolf Institute itself is recognised internationally for its encouragement of tolerance and understanding between people of all beliefs. This vision, Helaine mentions, is something that has been very important to her: “I think what they’re trying to do is reenergise and not only bring people together, but bring people together so that there is a sense that we can work together and we can arrive at something together.”

“If I was asked what has been one of the major problems in our world,” Helaine muses, “it would be overcoming apathy and restoring empathy, and reviving the beliefs that there’s something higher – it doesn’t have to be God, but just a spiritual value that’s higher than the material. It doesn’t have to be yours or mine. We’re human beings and we’re united in that – that’s really what the Woolf Institute is trying to [show]”. Helaine explains that she has even, kindly, “done the art itself without a fee.” The gallery that represents her have accepted those wishes – instead, the Woolf Institute have only been asked to “pay for the marble and the [carving work] because I really believe in what they are doing”.

After working for nineteen years to build relations between Christians, Jews and Muslims, the Woolf Institute can now officially mark their move to their new headquarters with the unveiling of Helaine’s beautiful ‘Tree of Life: Encounter’. The sculpture was revealed by both Helaine and the founder-director of the Woolf Institute, Dr Edward Kessler MBE, on February 11th in an official ceremony. The ‘Tree of Life: Encounter’ is now open to the public, and can be viewed by visitors in the Woolf Institute’s courtyard - a bright symbol of dialogue, peace and understanding.

Art and science – “an unusual match made in heaven”